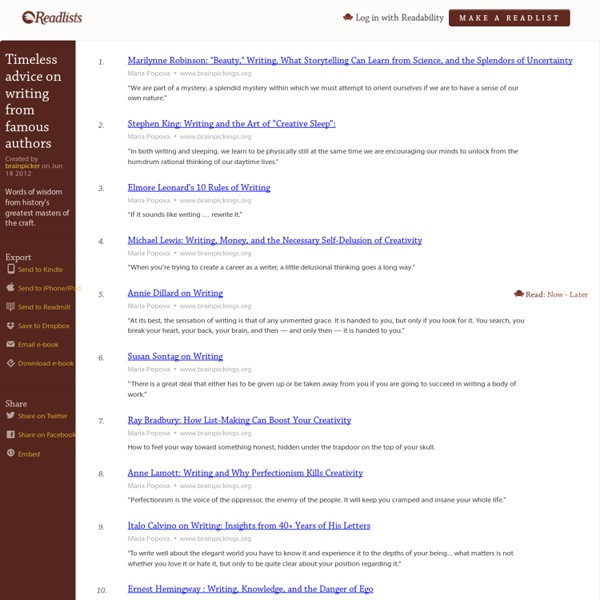 Article on Close Reading Welcome to the first post in our 7-week blog-a-thon on #closereading. We invite YOU to join in! Find more on how-to here. Several selected posts will be linked to on the Contributors page. Video: "Lady Lazarus" and the Received Form From the inaugural Poets Forum, presented by the Academy of American Poets on October 20, 2007, at Marymount College in New York City. On the second panel of the day, Frank Bidart, Rita Dove, Sharon Olds, and Gerald Stern answered questions about “Drawing From the Past, Breaking From the Past” from poet Elizabeth Alexander. Transcript

Why do academics choose useless titles for articles and chapters? Four steps to getting a better title. An informative title for an article or chapter maximizes the likelihood that your audience correctly remembers enough about your arguments to re-discover what they are looking for. Without embedded cues, your work will sit undisturbed on other scholars’ PDF libraries, or languish unread among hundreds of millions of other documents on the Web. Patrick Dunleavy presents examples of frequently used useless titles and advises on using a full narrative title, one that makes completely clear your argument, conclusions or findings.

The Real Story of a “Rosie the Riveter”: a Ford Motor Company Employee - Press Release Until World War II, the automotive industry was a mostly male bastion. But with so many men called to serve, more women than ever before sought employment. While their fathers, sons, husbands and friends fought in Europe and Asia, women served the war effort right at home, filling in quickly and capably. Women Were Integral to the War Effort In 1943, two years after the United States entered World War II, more than 30 percent of Ford workers in the machining and assembly departments were women. Women built jeeps, B-24 aircraft, and tractors.

Dennis Hopper Reads From Rainer Maria Rilke’s Timeless Guide to Creativity, Letters to a Young Poet For almost a century, writers and other creative people have found inspiration and a profound sense of validation in the Bohemian-Austrian poet Rainer Maria Rilke’s posthumously published Letters to a Young Poet. Many a sensitive soul has felt as if Rilke’s letters, written to a young man who had asked him for advice on whether to become a poet, were addressed directly to him or her. One of those people was the actor Dennis Hopper. “Rilke’s Letters to a Young Poet is a great book,” Hopper says in this short film from 2007. “For me the letters are a credo of creativity and a source of inspiration. After reading Rilke it became clear to me that I had no choice in the matter.

The Freshperson Problem – Lingua Franca - Blogs Earlier this week, I had my copy-editor hat on and was working my way through a newsletter for a graduate program at the university. I was fixing typos, inserting and deleting commas (often for the sake of consistency), changing words to avoid repetition, and the like. Then at one point, I watched myself prescriptively cross out the phrase “freshman composition” and reword it as “first-year composition.” I have long been a supporter of nonsexist language reform, from using singular generic they to replacing –man words with nongendered alternatives.

Writing about Reading...Constructed Response Resources Writing About Reading: Constructed Response resources for helping students construct written answers "Dear WritingFix and NNWP, I was so happy to find your Constructed Response webpage. At first, I was really disappointed that I could not physically attend your September Summit, since I live quite far from Reno, but then I started studying the resources you have posted for any of us teachers to use. 20 Poets on the Meaning of Poetry We’ve been thinking about poet Meena Alexander’s incredible address to the Yale Political Union, in which she refers to Shelley’s 1821 essay, A Defence of Poetry. The English poet’s work famously stated, “Poets are the unacknowledged legislators of the world.” Alexander concludes: “The poem is an invention that exists in spite of history… In a time of violence, the task of poetry is in some way to reconcile us to our world and to allow us a measure of tenderness and grace with which to exist… Poetry’s task is to reconcile us to the world — not to accept it at face value or to assent to things that are wrong, but to reconcile one in a larger sense, to return us in love, the province of the imagination, to the scope of our mortal lives.” Other poets have attempted to interpret “what is deeply felt and is essentially unsayable.”

Who are you writing for? 26 November 2013 by Jonathan O'Donnell Thanks to our sponsors, by Jonathan O’Donnell on Flickr Your grant application will probably only be read by half a dozen people who matter. Sure, you might get your colleagues to read it in draft.