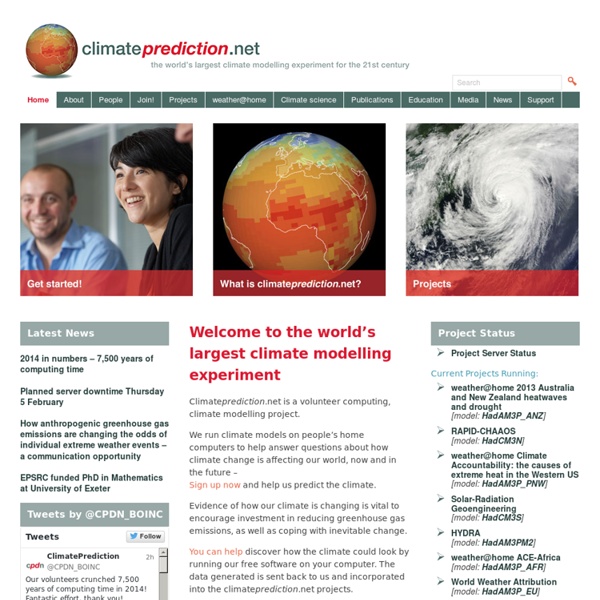 Climateprediction.net is a distributed computing, climate modelling project. We run climate models on people’s home computers to help answer questions about how climate change is affecting our world, now and in the future – Sign up now and help us predict the climate. Evidence of how our climate is changing is vital to encourage investment in reducing greenhouse gas emissions, as well as coping with inevitable change. You can help discover how the climate could look by running our free software on your computer. The data generated is sent back to us and incorporated into the climateprediction.net projects. Our computer models simulate the climate for the next century, producing predictions of temperature, rainfall and the probability of extreme weather events.

Protein Data Bank A Structural View of Biology This resource is powered by the Protein Data Bank archive-information about the 3D shapes of proteins, nucleic acids, and complex assemblies that helps students and researchers understand all aspects of biomedicine and agriculture, from protein synthesis to health and disease. As a member of the wwPDB, the RCSB PDB curates and annotates PDB data. The RCSB PDB builds upon the data by creating tools and resources for research and education in molecular biology, structural biology, computational biology, and beyond. Use this website to access curated and integrated biological macromolecular information in the context of function, biological processes, evolution, pathways, and disease states.

Pacific Sea Level Monitoring Project The Pacific Sea Level Monitoring (PSLM), operates under the Climate and Oceans Support Program in the Pacific (COSPPac). It is a continuation of the 20-year South Pacific Sea Level and Climate Monitoring Project (SPSLCMP) The 14 Pacific Island countries participating in the project are the Cook Islands, Federated States of Micronesia, Fiji, Kiribati, Marshall Islands, Nauru, Niue, Palau, Papua New Guinea, Samoa, Solomon Islands, Tonga, Tuvalu and Vanuatu. The primary goal of the project is to generate an accurate record of variance in long-term sea level for the Pacific region. The project also provides information about the processes, scale and implications of sea-level rise and variability of extreme events on South Pacific communities.

Climate Modeling 101: Climate Modeling Groups Climate Modeling Groups There are many groups in the United States and around the world at universities, federal laboratories, and other organizations that work on climate modeling. A few of the larger U.S. efforts are listed here: Beyond Belief: Candles in the Dark BEYOND BELIEF DVDs are now available! Purchase them here. Beyond Belief: Candles in the Dark DVDs will be available soon. Fatty Acids Types of fatty acids[edit] Three-dimensional representations of several fatty acids Fatty acids that have carbon–carbon double bonds are known as unsaturated. Fatty acids without double bonds are known as saturated. They differ in length as well. Length of free fatty acid chains[edit]

Nanotubes and Buckyballs Home > Introduction > Nanotubes and Buckyballs Last Updated: Tuesday, 29-May-2012 06:53:42 PDT Go directly to Websites Nanotube: "Conceptually, single-wall carbon nanotubes (SWCNTs) can be considered to be formed by the rolling of a single layer of graphite (called a graphene layer) into a seamless cylinder. Why trust climate models? It’s a matter of simple science Talk to someone who rejects the conclusions of climate science and you’ll likely hear some variation of the following: “That’s all based on models, and you can make a model say anything you want.” Often, they'll suggest the models don't even have a solid foundation of data to work with—garbage in, garbage out, as the old programming adage goes. But how many of us (anywhere on the opinion spectrum) really know enough about what goes into a climate model to judge what comes out?

"There Was No Big Bang!" Say Several Leading Cosmologists (A Galaxy Classic) "What banged?" Sean Carroll, CalTech -Moore Center for Theoretical Cosmology & Physics Several of the worlds leading astrophysicists believe there was no Big Bang that brought the universe and time into existence. Before the Big Bang, the standard theory assumes, there was no space, just nothing. PyMOL - Wiki Non-free binaries[edit] On 1 August 2006, DeLano Scientific adopted a controlled-access download system for pre-compiled PyMOL builds (including betas) distributed by the company. Access to these executables is now limited to paying customers but is free for students and teachers. Milgram's Obedience Experiments By Kendra Cherry Updated December 16, 2015. If a person in a position of authority ordered you to deliver a 400-volt electrical shock to another person, would you follow orders? Most people would answer this question with an adamant no, but Yale University psychologist Stanley Milgram conducted a series of obedience experiments during the 1960s that led to some surprising results. These experiments offer a compelling and disturbing look at the power of authority and obedience.

How reliable are climate models? Climate models are mathematical representations of the interactions between the atmosphere, oceans, land surface, ice – and the sun. This is clearly a very complex task, so models are built to estimate trends rather than events. For example, a climate model can tell you it will be cold in winter, but it can’t tell you what the temperature will be on a specific day – that’s weather forecasting. Climate trends are weather, averaged out over time - usually 30 years. Trends are important because they eliminate - or "smooth out" - single events that may be extreme, but quite rare. Beyond Belief: Enlightenment 2.0 BEYOND BELIEF DVDs are now available! Purchase them here. The aim of Beyond Belief: Enlightenment 2.0 is to invite participants to undertake together an ongoing reconnaissance of Enlightenment ideas in the light of advances in primarily cognitive neurosciences, evolutionary biology, physics etc. though not by any means scanting history, philosophy, law.

Synthesis (very nice instructional course) Chemistry requires an understanding of molecular structure, knowledge of molecular reactivity, and the creativity to combine them in novel situations. A synthetic chemist must be able to translate a two-dimensional drawing into a three-dimensional mental image. This three-dimensional image is then unwrapped and divided into key intermediates, each of which will be unwrapped and divided in turn. We cannot see with our eyes the molecules we study. Therefore, we bridge the gap between ordinary vision and visual imagination with models: physical models which embody the metaphorical models. Fluency with visual conventions is developed simultaneously with fluent perception of the concepts expressed in the representation.

SOLAR IMPULSE - Solar Impulse 2 Whereas the prototype uses existing technologies, Solar Impulse HB-SIB requires the development of new materials and new construction methods. Solvay has invented electrolytes that allow the energy density of the batteries to be increased; Bayer MaterialScience is allowing the project to make use of its nanotechnologies; and Décision is using carbon fibers that are lighter in weight than any previously seen. The first wing spar section was delivered to Dübendorf in March 2012. However, during the final test of this central part, the structure of the wing spar succumbed to the load and broke.