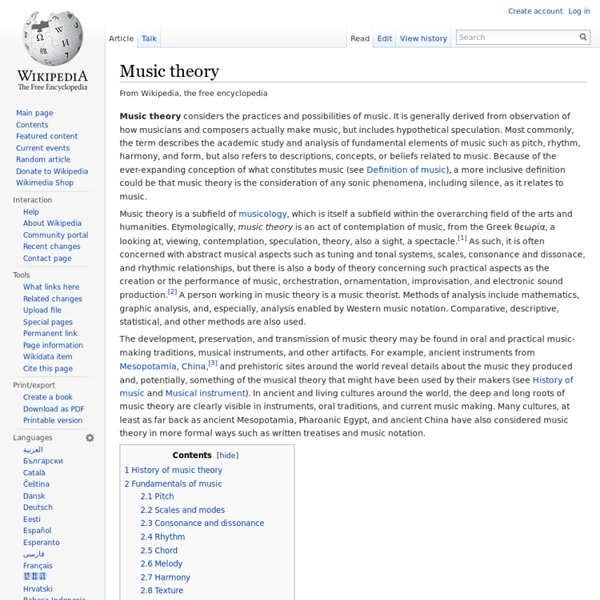 Music theory considers the practices and possibilities of music. It is generally derived from observation of how musicians and composers actually make music, but includes hypothetical speculation. Most commonly, the term describes the academic study and analysis of fundamental elements of music such as pitch, rhythm, harmony, and form, but also refers to descriptions, concepts, or beliefs related to music. Because of the ever-expanding conception of what constitutes music (see Definition of music), a more inclusive definition could be that music theory is the consideration of any sonic phenomena, including silence, as it relates to music. Music theory is a subfield of musicology, which is itself a subfield within the overarching field of the arts and humanities. Etymologically, music theory is an act of contemplation of music, from the Greek θεωρία, a looking at, viewing, contemplation, speculation, theory, also a sight, a spectacle. History of music theory[edit] Pitch[edit] Play . Play . Related:  music theory • .caisson

A different way to visualize rhythm - John Varney To learn more on circular perceptions of rhythm with specific reference to African music, read this paper and then watch this Five(ish) Minute Drum Lesson on African Drumming. How has drumming played an essential role in African culture? What do specific rhythms represent? Interested in the software applications of a circular rhythmic approach? What are the pros of representing rhythm with a circular representation as opposed to using a more traditional linear representation? What exactly is rhythm? How does the beat of a song differ from its rhythm? As seen from this TED Ed lesson, different cultures share similar rhythms. Rhythm and Math are related? Just love music and want to learn more? How playing an instrument benefits your brain - Anita Collins Why we love repetition in music - Elizabeth Hellmuth Margulis Music as a language -Victor Wooten

Musical composition Musical composition can refer to an original piece of music, the structure of a musical piece, or the process of creating a new piece of music. People who practice composition are called composers. Although today composition is considered to consist of the manipulation of each aspect of music (harmony, melody, form, rhythm, and timbre), according to Jean Benjamin de Laborde (1780): Composition consists in two things only. The first is the ordering and disposing of several sounds...in such a manner that their succession pleases the ear. Musical compositions[edit] A piece of music exists in the form of a composition in musical notation or as a single acoustic event (a live performance or recorded track). Composition as musical form[edit] Composing music[edit] Methods Another method involves free playing of your desired instrument. As technology progresses, new and inventive methods of music composition come about. Structure Composers may decide to divide their music into sections. In the U.S.

Chordbook.com - Learn Guitar Chords, Scales, Guitar Tuner How maths helps us understand why music moves people Music is known to provoke the senses, give pleasure and sometimes move people to tears. Surely this has little to do with mathematical models which are so frequently associated with cold and rational logic. So what can maths tell us about this powerful phenomenon closely connected to the emotions? Can mathematics help us measure what’s sublime or ineffable about a piece of music? Music evokes strong emotions such as frisson (goose bumps), awe and laughter – and has been found to use the same reward pathways as food, drugs and sex to induce pleasure. A shiver down one’s spine or an uncontrollable guffaw when listening to music is most often a case of the music defying your expectations. On one end of the spectrum, a performance or a piece of music that does just what you’d expect runs the risk of becoming banal. Author provided Listen PDQ Bach: The Short-tempered Clavier: Minuet in C Download MP3 / 735 KB Playing with expectations Listen Happy Birthday (first part) Download MP3 / 284 KB

Polarity Theory & Principles, Energy Healing, Esoteric Healing. Spiritual Healing Principles By virtue of these elements, the physical human body is created. The body is a composite of the interaction of the five elements (which are electromagnetic in nature) in the physical domain. The body, then, is an electromagnetic energy system expressing the dynamic interplay of the five elements from their most subtle to their most dense forms. Each form manifests a unique anatomy, with the most subtle form expressed as a "wireless" circuitry directing the flow of energy in its etheric state. Pierre Pannetier Dr Stone's successor teaching at Heartwood The body is seen as an intricate and dynamic interplay of the Three Principles and Five Elements which creates its subtle anatomy and physiology.

Music Theory for Musicians and Normal People by Toby W. Rush This page includes links to each of the individual Music Theory pages I've created in PDF form. Click the thumbnails to view or download each page as a PDF for free! These pages are available for free under a Creative Commons BY-NC-ND license. This collection is a work in progress, but if you would prefer, you can download all the current pages as a single PDF. Each and every one of these pages is available is an 18" x 24" poster. These pages are available in multiple translations and localizations! Interested in helping translate these pages to your own language? What is Music Theory? And why are all these cool and attractive people studying it? Notation: Pitch Or how five little lines came to rule the world. Notation: Rhythm Because nothing says "play that note shorter" like a bunch of weird-looking flags. Notation: Meter Feel the beat! Beaming Nobody knows beaming like Sparky knows beaming. The Major Scale Let's add some happy little notes to our canvas. Key Signatures Minor Scales

Roman mythology Roman mythology is the body of traditional stories pertaining to ancient Rome's legendary origins and religious system, as represented in the literature and visual arts of the Romans. "Roman mythology" may also refer to the modern study of these representations, and to the subject matter as represented in the literature and art of other cultures in any period. The Romans usually treated their traditional narratives as historical, even when these have miraculous or supernatural elements. The stories are often concerned with politics and morality, and how an individual's personal integrity relates to his or her responsibility to the community or Roman state. Heroism is an important theme. The study of Roman religion and myth is complicated by the early influence of Greek religion on the Italian peninsula during Rome's protohistory, and by the later artistic imitation of Greek literary models by Roman authors. The nature of Roman myth[edit] Founding myths[edit] Other myths[edit]

Some Interesting Keyboards Some books about music refer to a persistent "myth" that it is possible, using only two keyboards, to construct an instrument on which it is possible to play music in any key using just intonation. Indeed, it is true that it is not possible, with only 24 keys to the octave, to construct an instrument that will play in perfect just intonation in every key. However, it is possible to exhibit an example of the type of keyboard that has given rise to this "myth", so that its capabilities, as well as its limitations, can be seen. Thus, what may be constructed with 24 keys to the octave is a keyboard which allows playing diatonic music in just intonation in any of the twelve conventionally designated keys, even if nothing can be ensured concerning the pitch of accidentals, and with the provision that one has to make a jump in pitch when one transposes around the far end of the circle of fifths. The most obvious design: This sequence is made up of these 22 ratios: