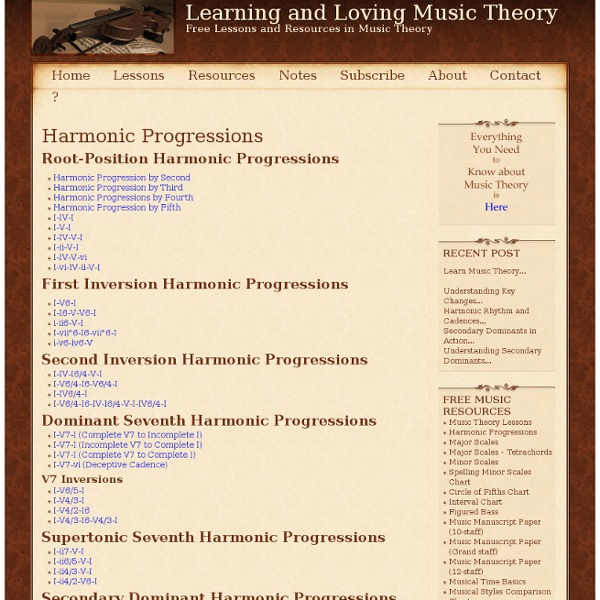 Kelvin, You actually caught a mistake on the roman numerals! Thanks, I’ll have to fix that. The first and last chords of the progression are not 7th chords. Somehow I inadvertently typed “I7″ on the first chord of all the major keys. (Notice that I didn’t do that for the minor keys.) In the classical tradition, for the sake of stability, the first and last chords of a circle-of-fifths progression are usually triads, not 7th chords. Harmonic Sequences Part 2 In the jazz tradition all chords usually are 7ths, in which case the progression will start and end with 7th chords. Thanks again for your interest and input.

The Harmonic Language of Jazz Standards Have you ever met a player who can seemingly play any song in any key, coming up with different chord substitutions on every chorus? If you have been playing for a while but thought this skill was something magical and beyond you, then this book is for you. What allows players to do these things is the ability to recognize and understand common chord progressions and to reproduce them by ear as easily as one can play melodies by ear. This is a skill that you too can learn! After mastering the concepts explained in this book, you will find you are able to play by ear, in any key, with appropriate chord changes, any standard you know well to hum. You will also be able to make a variety of different substitutions while playing, and you will also see improvements in your your improvisation and composition abilities.

Harmonic Functions - Augmented Sixths We will start by transforming the iv degree chord of the A minor key into an augmented sixth chord. Below is the i - iv - V - i progression in A minor: now, we set the iv degree chord in first inversion: by raising the root of the iv degree chord a half-step (D# in this case) we get an augmented sixth chord: The chord receives the name of Augmented Sixth chord because of the augmented sixth interval between the bass and the chromatically raised note. Music Scales - Frequency, Notes, Octaves, Tuning, Scales ... undefined Synthesizers, Music & Television : -or- -or- © T. Yahaya Abdullah Links • Scales - HTML Version • Back to Main Page • • Frequency • Notes and Octaves • Tuning Notes • Equal-Tempered Tuning • Scales • Major and Minor Scales • Major & Minor Transforms • Modes • Modal Transforms • Pentatonics • Modal-Pentatonic Transforms • Example Application of Transforms • Scales Reference • Conforming to Classical Notation • Frequency Let's imagine you have a long hollow tube.

circle of 5ths text Find the Chords in a Scale Once more, the key of C is our reference. Because the Circle of Fifths can help us name the notes in any major scale, it can also show us the chords in a major chord scale. Here's how: The Chord Guide: Pt III - Chord Progressions Chord progressions are the canvas on which musicians paint their masterpieces, and it’s a canvas which is a piece of art in itself. A chord progression can be subtle and in the background or it can be blatant and up front; it can be simple and catchy, or it can be technical and complex, it can stay in one key or it can change like the seasons. In any of these cases a chord progression is what drives the song as it literally shapes the music that accompanies it. Chord progressions are like a cozy home where melody and rhythm can kick their feet up. All the songwriting giants, like John Lennon, Paul McCartney, George Harrison, and Bob Dylan, to name a few, have/had a tremendous knowledge of the art of the chord progression.

50s progression 50s progression in C, ending with C ( Play ) The progression, represented in Roman numeral analysis, is: I-vi-IV-V. For example, in C major: C Am F G (macro analysis). Theory[edit] Variations[edit] Know Every Note on the Guitar in 9 Days Knowing every note on the guitar is a challenge unique to the instrument. A saxophone has only one way to finger each note, while a guitar usually has a few different strings and four fingers to choose from. String a few notes together and the permutations of how to play them will wreck your brain. Pianists have a similar problem with ten available digits, but you can memorize the notes on a keyboard in a matter of minutes; the same pattern of white and black keys repeats every octave. The challenge with navigating the guitar fretboard is its two-dimensional layout. It’s a matrix, while nearly every other instrument has a linear path of notes from the bottom to the top of its range.

thinkingHarmony - in-depth discussions of jazz and classical harmony share The device of presenting ideas within the framework of a student-teacher conversation goes back at least as far as Plato, and probably beyond. But thinkingMusic is itself a platform for presenting ideas, so why this ploy? While thinkingHarmony may appear to use this device, it's actually the real thing: a selection of email conversations that have taken place between my students and me, as part of our ongoing, long-distance lessons in classical and jazz harmony. Rather than use a teacher-student framework as a vehicle for my ideas, my intention is the reverse: to show that long-distance instruction can be deeply effective and enjoyable, given the right mix of technology, creativity and personal style. These email conversations take place between me and “Gustave M.”.

How Music REALLY Works!, Chapter 6: How Chords and Chord Progressions REALLY Work 6.17.1 Optimizing Unity and Variety in Chord Progressions 6.17.2 Emotional Effects of Chords The writer Tom Wolfe once advised that, just as a doctor learns, “First, do no harm,” so an artist must keep in mind, “First, entertain.” Properties of musical modes Modern Dorian mode on C Play Early Greek treatises on music do not use the term "mode" (which comes from Latin), but do describe three interrelated concepts that are related to the later, medieval idea of "mode": (1) scales (or "systems"), (2) tonos—pl. tonoi—(the more usual term used in medieval theory for what later came to be called "mode"), and (3) harmonia (harmony)—pl. harmoniai—this third term subsuming the corresponding tonoi but not necessarily the converse (Mathiesen 2001a, 6(iii)(e)). Greek Dorian octave species in the enharmonic genus, showing the two component tetrachords

Exotic Guitar Scales – Part 1 Tuesday, March 2, 2010, 17:37 86,289 views Exotic Guitar Scales are great for adding spice to your lead guitar playing. I wouldn’t suggest learning any of the 12 scales shown in this lesson before learning the minor pentatonic scale, the natural minor or the major scale (see 4 Scales You Should Know) but they might be part of the sound and guitar style you are searching for. Each of these 5 and 7 note scales is an attention getter! All scales are shown in the Key of A. Exotic Guitar Scales