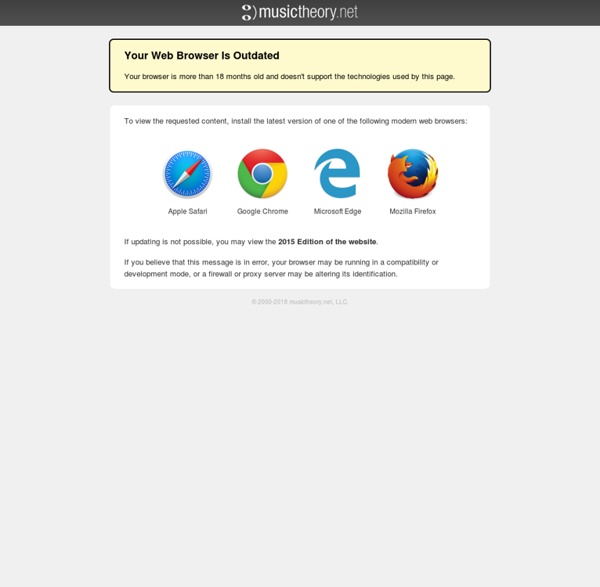 Free Music Theory Worksheets! Material on this page is free.NEW! you can now consult an index of terms used in these worksheets.Also explore a page of worksheet extras: Worksheet Answers, Test Templates and Flash Presentations. Here are some testimonials from music teachers about these workbook chapters: Scale (music) Pattern of intervals in the C-major scale Play A measure of the width of each scale step provides a method to classify scales. For instance, in a chromatic scale each scale step represents a semitone interval, while a major scale is defined by the interval pattern T–T–S–T–T–T–S, where T stands for whole tone (an interval spanning two semitones), and S stands for semitone. Based on their interval patterns, scales are divided into categories including diatonic, chromatic, major, minor, and others. Scales are typically listed from low to high.

Emancipation of the dissonance Chords, featuring chromatically altered sevenths and ninths and progressing unconventionally, explored by Debussy in a "celebrated conversation at the piano with his teacher Ernest Guiraud" (Lockspeiser 1962, 207). The emancipation of the dissonance was a concept or goal put forth by composer Arnold Schoenberg and others, including his pupil Anton Webern. The phrase first appears in Schoenberg's 1926 essay "Opinion or Insight?" (Schoenberg 1975, 258–64). It may be described as a metanarrative to justify atonality. Jim Samson (1977, 146–47) describes:

How to construct chords - Piano Clues: Free tips and lessons for playing piano, organ and electronic keyboard You don’t need a “1000 Chords Dictionary” to be able to read and play chords. You can learn how to form chords on your own, because chords are built using simple formulas. A chord is three or more notes played at the same time. It’s as simple as that. Of course, the trick is to know which three notes… How to read sheet music... a free course. The Mystery of Sheet Music To many people, reading sheet music is an intimidating, mysterious activity. But it doesn't need to be! It's actually quite simple, once you understand the secret behind it.

Practice Sight Reading - Random Measures 4/4 meter for 9 measures at level 3 PracticeSightReading.com Create Listen There will be one measure to count you in. Change Listen Settings Quartal and quintal harmony Four note quartal chord Play . Analysis[edit] Consonance & Dissonance Consonance[edit] The definition of consonance has been variously based on experience, frequency, and both physical and psychological considerations (Myers 1904, p. 315). These include: Perception Blend/fusion: perception of unity or tonal fusion between two notes (Stumpf[full citation needed]; Butler and Green 2002, p. 264)Frequency ratios: with ratios of lower simple numbers being more consonant than those that are higher (Pythagoras[full citation needed]). Many of these definitions do not require exact integer tunings, only approximation.

The Aesthetics of Popular Music Popular music is widely assumed to be different in kind from the serious music or art music that, until very recently, monopolized attention in philosophical discussions of music. In recent years, however, popular music has become an important topic for philosophers pursuing either of two projects. First, popular music receives attention from philosophers who see it as a test case for prevailing philosophies of music. Even now, most philosophy of music concentrates on the European classical repertoire. Therefore, if there are important differences between popular and art music, widening the discussion to include popular music might encourage us to reconsider the nature of music. Second, popular music increasingly serves as a focal point in general debates about art and aesthetic value.

I analyzed the chords of 1300 popular songs for patterns. This is what I found. For many people, listening to music elicits such an emotional response that the idea of dredging it for statistics and structure can seem odd or even misguided. But knowing these patterns can give one a deeper more fundamental sense for how music works; for me this makes listening to music a lot more interesting. Of course, if you play an instrument or want to write songs, being aware of these things is obviously of great practical importance. In this article, we’ll look at the statistics gathered from 1300 choruses, verses, etc. of popular songs to discover the answer to a few basic questions. First we’ll look at the relative popularity of different chords based on the frequency that they appear in the chord progressions of popular music. Then we’ll begin to look at the relationship that different chords have with one another.

Polychord Bitonal polychord: F major on top of C major.[1] Play The use of polychords may suggest bitonality or polytonality. Harmonic parallelism may suggest bichords. Polychords: Em, EbM, EbM, and DM over Dm.[8] Medieval music Medieval music is Western music written during the Middle Ages. This era begins with the fall of the Roman Empire and ends sometime in the early fifteenth century. Establishing the end of the medieval era and the beginning of the Renaissance is difficult; the usage in this article is the one usually adopted by musicologists. Overview[edit] Instruments[edit]