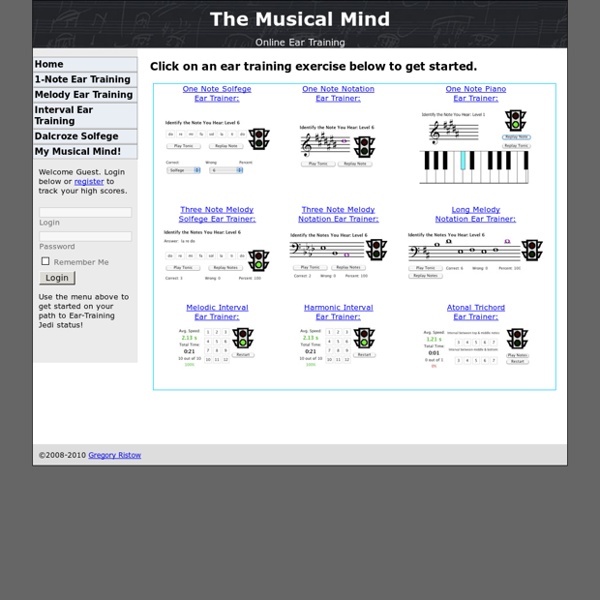 Practice Sight Reading - Random Measures 4/4 meter for 9 measures at level 3 PracticeSightReading.com Create Listen WESTERN SKIES-EASTERN DREAMS " a thrilling collection of improvisation-based pieces long on virtuosity, near telepathic musical interplay and the rhythmic and/melodic aspects of India, Africa and the Middle East as interpreted through a western ethos...The Music is transcendent and transportive.....Brave, exciting and often beautiful " Jeff Miers The Buffalo News "Both musicians are completely sympathetic and work/play together with an impressive amount of creativity.

Scales and emotions See also a post about making chords from scales. So maybe you want to write a song or an instrumental in a particular mood or style, and you’re feeling overwhelmed by all the scales. Here’s a handy guide to the commonly used scales in Western pop, rock, jazz, blues and so on. Learning and Loving Music Theory Notating rhythm often is the most difficult part of music notation. In this music theory lesson, I will show you principles that will help you to notate rhythm in the clearest possible manner. When I teach this lesson in the classroom, I’m often asked, “Why do I have to do it this way?”

Developing a vivid aural imagination The extent to which your aural imagination is developed, largely determines: the quality of lines you play, how you play those lines (articulation, swing feel, inflection), and the sound you play with. Nothing has such an impact on your playing than your aural imagination. If there were a secret to improvising, developing your aural imagination would be it. Ok, ok. I didn’t say oral imagination. You’ll have to go to the other 98% of the internet for that. Free Music Theory Worksheets! Material on this page is free.NEW! you can now consult an index of terms used in these worksheets.Also explore a page of worksheet extras: Worksheet Answers, Test Templates and Flash Presentations. Here are some testimonials from music teachers about these workbook chapters: I have been using your fantastic music theory sheets and PDF downloads to teach high school piano theory to 28 students per class, all of whom are at different levels of study and accomplishment. Your method is comprehensive and easily accessible to students of all ages.

Hendrix at 70: New album offers different look Originally published March 5, 2013 at 9:13 AM | Page modified March 5, 2013 at 3:33 PM NASHVILLE, Tenn. — Jimi Hendrix recorded everything. More than 40 years after his death, though, the tape is finally running out. Learning and Loving Music Theory Kelvin, You actually caught a mistake on the roman numerals! Thanks, I’ll have to fix that. The first and last chords of the progression are not 7th chords. Somehow I inadvertently typed “I7″ on the first chord of all the major keys. How to construct chords - Piano Clues: Free tips and lessons for playing piano, organ and electronic keyboard You don’t need a “1000 Chords Dictionary” to be able to read and play chords. You can learn how to form chords on your own, because chords are built using simple formulas. A chord is three or more notes played at the same time.