The Rock and Roll Hall of Fame and Museum 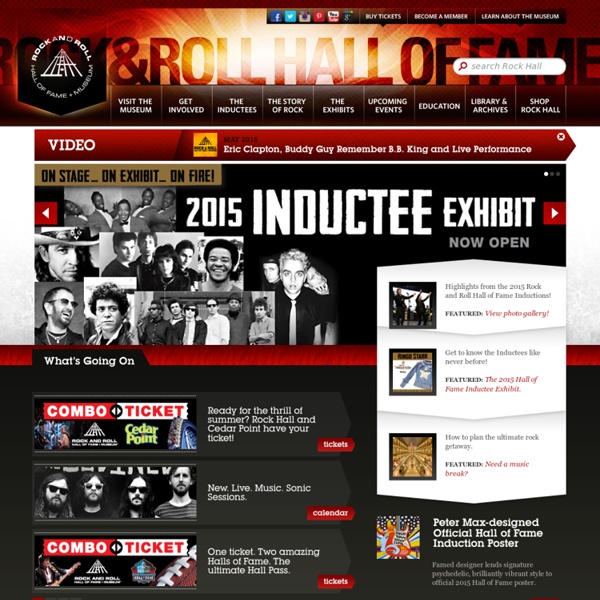 An Epic Hero in the Film “Pulp Fiction”? Throughout history, the figure of the epic hero has persisted and although he may take different forms, he generally embodies several key characteristics. For example, an epic hero often is a paragon of some virtue or value that is important in his society. He is often on a quest of some kind and pursues this quest with the utmost diligence and commitment. In addition, an epic hero is generally associated with the supernatural world, either by nature of his birth or his life circumstances (consider, for example, the epic hero of Greek literature Achilles) and comes from a lineage that somehow makes him destined for a particular fate or purpose. Before offering an examination of the ways in which Vincent in Pulp Fiction is not an epic hero, it is useful to look at the ways he does appear to embody some similar characteristics of an epic hero.

History of Rock & Roll The songs and the sounds we call "rock and roll" evolved from many different sources, in many different regions, and at many different moments in twentieth- century history. The music was shaped—and continues to be molded and transformed—by countless regular people, some doing what they love, others seeking refuge from what they hate, some hoping to change the world, and still others resisting what they fear. How many times per week would you say you hear someone refer to "rock and roll" in some form or another? So the next question is, do you like rock and roll? Or maybe you're saying, "Yes, I love rock and roll—I eat, sleep, breathe it. What exactly is "rock and roll" then, you ask. You might be surprised by the answers to these questions... and, really, the whole story of how rock and roll came to be. People who Shmooped this also Shmooped...

The Official Website Hollywood Superheroes Losing The Fight For Diversity hide captionRyan Reynolds plays Hal Jordon in this year's Green Lantern. Warner Brothers Ryan Reynolds plays Hal Jordon in this year's Green Lantern. The big budget disappointment Green Lantern was about a superhero whose powers were only limited by his imagination. Consider the box office potential if movie producers had been as bold as Marvel's Ultimate Comics Spider-Man series when it introduced Miles Morales — a part black, part Hispanic teen — as the new Spider-man. It wouldn't have been much of a stretch for producers to reimagine Green Lantern as a person of color. So if Hollywood can crank out fantasy pictures with blue Smurfs, why is it so reticent to do the same with African-Americans, Hispanics and Asians? Every hero needs a villain, and I can tell you from experience that supposedly "liberal" Hollywood loves to make the audience the bad guy. There is, however, a bit of evidence to back that claim. Clearly the folks at Marvel comics are open to the possibilities.

Blues Music History Sometime around 1890, the blues emerged as a distinct African-American art form, rooted in the southern U.S. and drawing on work songs and hollers, folk tradition, black spirituals, and the popular music of the time. Looking back from 1890, one can speculate about the African influence in the musical structure of the blues as it grew from slave culture and the memory of slavery. Looking forward from 1890, a time of transition in America and of dashed hopes for blacks in the resurgent Jim Crow South, one can see the blues as a powerful force both shaping and shaped by the evolution of American popular culture (from the "race records" craze of the 1920s through the blues-fueled rock revolution of the postwar years) and the history of black and white race relations in the century ahead. "The blues ain't nothing but a good man feelin' bad." That's what Leon Redbone said, anyway, and who can't relate to that? What about when your parents went crazy for Elvis?

Achilles Last Stand - The Led Zeppelin Website FullDocumentary.com First to purchase will own this one of a kind asset 1,538 Customers shopping on HugeDomains right now! 73% of all domains registered on the Web are .coms. The reason is simple: .com is the where most of Web traffic happens. Owning a premium .com gives you great benefits including better SEO, name recognition, and providing your site with a sense of authority. The one and only .com name of it's kind Return it within 30 days if you're not satisfied Immediate ownership transfer Creates instant branding and credibility What people have said about HugeDomains - Jeff Solomon TalkChain.com "Ok, so i was super skeptical to start with this site; I've bought and sold lots of domains in my time, but not used or heard of these guys until now. - Monica Rodriguez MonicaRodriguez.com "Purchasing my domain from HugeDomains.com has been one of the most smart investments I have made. - Bryan Keith Parker BryanKeith.com "I was really impressed with the service and follow-up.

The Blues The Blues™ anchors a multi-media celebration that raises awareness of the blues and its contribution to American culture and music worldwide. Under the guiding vision of Executive Producer Martin Scorsese, seven directors will explore the blues through their own personal styles and perspectives. The films in the series are motivated by a central theme: how the blues evolved from parochial folk tunes to a universal language. The seven-part film series includes: Feel Like Going Home by Martin Scorsese The Soul of a Man by Wim Wenders The Road to Memphis by Richard Pearce Warming by the Devil's Fire by Charles Burnett Godfathers and Sons by Marc Levin Red, White & Blues by Mike Figgis Piano Blues by Clint Eastwood

Cory Branan - The Corner Chicago: The Best Blues Bars : Music And Festivals 'Man playing saxophone' As Robert Johnson said, Chicago is a "sweet home" for the blues. The emergence of blues culture in the Windy City began in the 1920s and coincided with a nationwide increase in musical performance and recording. This culture is alive and kicking today, and that's why we're taking you to five of Chicago's hottest blues bars. Blue Chicago Blue Chicago in the city's North River district has been a local favorite for over 12 years. For visitors, this is a great place to learn the story of Chicago blues. The club actually has 2 locations and between the 2 clubs you can hear blues musicians and vocalists every night of the week and one cover charge is good at both. Rosa's Lounge The New York Times calls Rosa's the best blues bar in Chicago and that's good enough for us. One more reason to spend at evening with Tony and Mama Rosa is the food. Lee's Unleaded Blues On Chicago's Southside, Lee's Unleaded Blues is serving up authentic, old-school Chicago Blues.