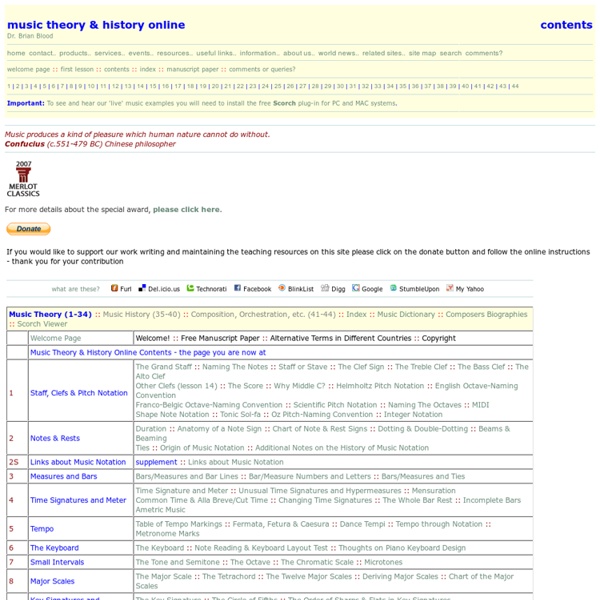 Scale (music) Pattern of intervals in the C-major scale Play A measure of the width of each scale step provides a method to classify scales. For instance, in a chromatic scale each scale step represents a semitone interval, while a major scale is defined by the interval pattern T–T–S–T–T–T–S, where T stands for whole tone (an interval spanning two semitones), and S stands for semitone. Scales and emotions See also a post about making chords from scales. So maybe you want to write a song or an instrumental in a particular mood or style, and you’re feeling overwhelmed by all the scales. Here’s a handy guide to the commonly used scales in Western pop, rock, jazz, blues and so on. Key Chords Key Chords app generates guitar chord progressions automatically. Use it free online, or get the app for Mac, Windows or iOS (iPad) - Click on a chord to preview how it sounds. - Drag and drop to arrange the chord progression - Tweak the settings to control the playback speed

TrueGuitarist.com Free Video Guitar Lessons What follows is just a brief summary of basic theory and harmony necessary to understand practical applications on your instrument. The natural sounds are: You might also find in some books the name of these notes in Italian (nothing to do with ‘solfege’!) Do,Re,Mi,Fa,Sol,La,Si and in German C,D,E,F,G,A,H. # = sharp: raises the given note of a half step.

Quartal and quintal harmony Four note quartal chord Play . Analysis[edit] Definition[edit] Analytical difficulties[edit] Speak from day 1 You don’t have to be “gifted” to learn a new language, but you do have to be smart about how you learn it. Hi! When you’ve watched the video above and are ready to join the thousands of other language hackers who are using the Fluent in 3 Months PREMIUM package as an unconventional approach to learn languages quickly, click the button below. If you’ve got any questions after watching the video, check out the “Frequently Asked Questions” page. I’ve tried to answer every possible question you might have on that page, including ones I get a lot such as: “What if I’m not good at learning languages?” and “What if I don’t have enough time?”

Jazz Progressions Jazz Progressions are simply common chord progressions in jazz music. One of the most common progressions is the ii-V-I progression. The ii-V-I sounds at its best when you use seventh chords and their expanded voicings. Free Music Theory Worksheets! Material on this page is free.NEW! you can now consult an index of terms used in these worksheets.Also explore a page of worksheet extras: Worksheet Answers, Test Templates and Flash Presentations. Here are some testimonials from music teachers about these workbook chapters: I have been using your fantastic music theory sheets and PDF downloads to teach high school piano theory to 28 students per class, all of whom are at different levels of study and accomplishment. Your method is comprehensive and easily accessible to students of all ages.

Relative key Circle of fifths showing major and minor keys Relative tonic chords on C and A ( Play ). Chromatic modulation in Bach's Du grosser Schmerzensmann, BWV 300, m. 5-6 ( Play with half cadence, Play with PAC) transitions from FM to its relative minor dm through the inflection of C♮ to C♯ between the second and third chords. Polychord Bitonal polychord: F major on top of C major.[1] Play The use of polychords may suggest bitonality or polytonality.