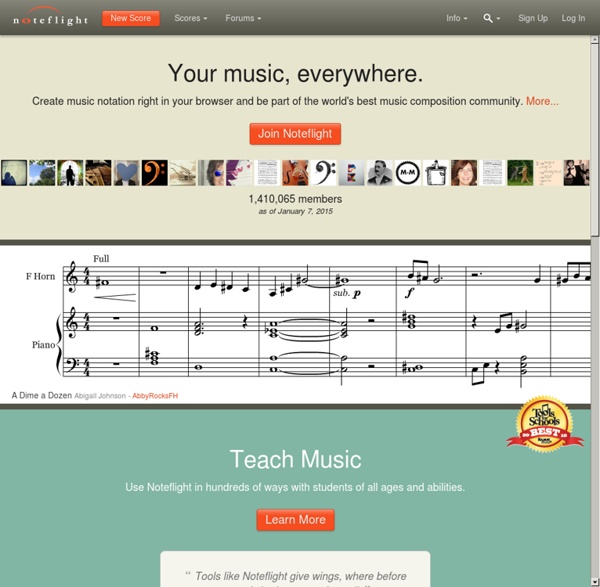 Your music, everywhere. Create music notation right in your browser and be part of the world's best music composition community. More... Noteflight® is an online music writing application that lets you create, view, print and hear professional quality music notation right in your web browser. Write music on your computer, tablet or smartphone, share with other users, or embed in your own pages. Sign up for a free account, or purchase a Noteflight Crescendo subscription to take your creativity to the next level.Try the demo.

6 Open Source Software Projects of (Musical) Notation As it's been pointed out before, there seems to be a sizable overlap between open source hardware and software enthusiasts and amateur musicians. And while some of you are making music through the tried-and-true "let's see what that button does" method, there are a few of you who might be interested in composing music the old-fashioned way -- digitally producing paper-based music sheets. Whether you're writing music for the guitar, learning how to improvise jazz solos, or writing entire music scores, chances are that one of the pieces of open source software listed below can make the process a little easier.

Classical Music in the 21st Century Classical music is everywhere. If you find yourself enjoying random orchestral pieces that you hear in movies, or you have a secret desire to listen to a symphony but don't know where to start, don't feel embarrassed - you're not alone! This site is dedicated to providing a basic background in classical music for young people, mainly teenagers, who enjoy all types of music. Most teenagers listen primarily to popular music, and artists like the Black Eyed Peas and Lady Gaga dominate music media, leaving little room for classical music. Classical music is often thought to be outdated or elitist - given the average age at a classical music concert, this opinion seems valid. Sight-reading Caravaggio's Rest on the Flight into Egypt (1594–96) Terminology[edit] Sight-reading[edit] Authors in music literature commonly use the term "sight-reading" generically for "the ability to read and produce both instrumental and vocal music at first sight ... the conversion of musical information from sight to sound" (Udtaisuk 2005). Udtaisuk and some other authors prefer the use of the more specific terms "sight-playing" and "sight-singing" where applicable.

Teachers Give your students access to all Noteflight Crescendo features! There's no IT setup required - just add your students to your new community and be up and teaching in minutes. 1 Site Harmonic Progressions Kelvin, You actually caught a mistake on the roman numerals! Thanks, I’ll have to fix that. The first and last chords of the progression are not 7th chords. Music Theory for Musicians and Normal People by Toby W. Rush This page includes links to each of the individual Music Theory pages I've created in PDF form. This is a work in progress; I am writing new ones regularly and fixing errors and omissions on existing ones as I find them. If you find them useful for your theory studies, you are welcome to use them, and if you find errors or have suggestions, I invite you to contact me.

Tunebook With Sheet Music and MP3 Audio I have selected 20 tunes for this tunebook. Not all of them are Irish tunes, but they are all tunes that I have played in a contra dance band (playing second fiddle and guitar) and tunes that I like. I think that they are all quite suitable for the Irish or simple-system flute, whistle, or other melody instrument. I tried to choose a fairly even sampling of reels, hornpipes, jigs, and waltzes and airs. Chord (music) Mussorgsky's Pictures at an Exhibition "Promenade", is a piece showing an explicit chord progression.(Nattiez 1990, p. 218) Play In the medieval era, early Christian hymns featured organum (which used the simultaneous perfect intervals of a fourth, a fifth, and an octave[13]), with chord progressions and harmony an incidental result of the emphasis on melodic lines during the medieval and then Renaissance (15-17th centuries).[7][14] The Romantic period, the 19th century, featured increased chromaticism.[7] Composers began to use secondary dominants in the Baroque, and they became common in the Romantic period.[19] Many contemporary popular Western genres continue to rely on simple diatonic harmony, though far from universally:[20] notable exceptions include the music of film scores, which often use chromatic, atonal or post-tonal harmony, and modern jazz (especially circa 1960), in which chords may include up to seven notes (and occasionally more).[21]