Create your own songs online 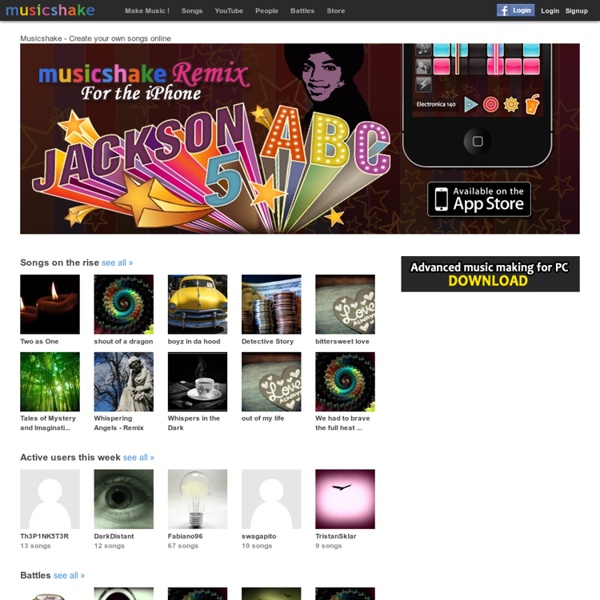 Free Online Spanish Games The games below are for mobile, tablet and PC. Each game has numerous categories including adjectives, adverbs, verbs, nouns, por vs para and many more. Click on any game link below to see the categories associated with that game. First notes for 639-year composition The first notes in the longest and slowest piece of music in history, designed to go on for 639 years, are being played on a German church organ on Wednesday. The three notes, which will last for a year-and-a-half, are just the start of the piece, called As Slow As Possible. Composed by late avant-garde composer John Cage, who died in 1992, the performance has already been going for 17 months - although all that has been heard so far is the sound of the organ's bellows being inflated. Music Store As of November 1st, 2016, the Music Store on Vimeo is no more. However, there are many places on the web where you could find music to use in your videos, particularly music made available under a Creative Commons license. We recommend checking out these FAQs — you'll find lots of information about using CC-licensed music and which kinds of licenses would work for the purposes of your video. Downloading Music Store purchasesIf you bought tracks from SmartSound, you will have to reach out to them directly to download your tracks.

ZED60-10FX - Allen & Heath Live or in the studio, ZED60-10FX is an ultra-portable mixer for solo artists and small bands. Based on our top selling ZED-10FX, the new ZED60-10FX adds premium quality 60mm faders for that intuitive, tactile mixing experience. This mixer is a guitarist’s dream. Two of the 4 mono channels have high impedance jack inputs that can take a normal line level or a low level input from a guitar pickup, so guitars can be plugged straight into the mixer without the need for DI boxes. These inputs have been crafted to recreate the sound of a classic tube preamp in a combo or head amp for incredible definition and warmth. Two stereo inputs are provided for MP3/CD players or keyboards.

NLP Presupposition: The Map is Not the Territory, by John David Hoag Our brains will use whatever maps we give them. NLP's 1933 roots and why eating menus isn't pretty A founding principle of NLP, the distinction between a map and a territory made its debut in Alfred Korzybski's 1933 seminal work, Science and Sanity: An Introduction to Non-Aristotelian Systems and General Semantics. The idea seems simple enough -- who, after all, would confuse a roadmap with a road, or a menu with a meal? A Young Person's Guide to the Avant-Garde [LTMCD 2569] Various Artists Sleevenote: Disc 1: 1. EQ Chart « ObiAudio This is from a thread on Future Producers..I did not write this and do…to an extent…agree with most of this. I just copied and pasted the good stuff: To understand EQ and its intricacies you need hands-on experience, but to help you get started, here’s a table of general uses and the different ranges that EQ can affect. As every sound is different, though, these are necessarily very general guidelines… Kick Drum

Kusudama Tutorial part 2 Today I am showing you part 2 of how to make a kusudama ball. You can find the first part here. In part 1, I showed you have to make the individual flowers; you should now have 12 flowers made from 60 individual petals. The Benefits of Cold Coffee: A Music Review “I cannot stop to comfort them/I’m busy chasing up my demon…” Concept: Kate Bush tells madly macabre stories with a whimsical bent in between enthusing over such unrelated topics as Egyptian splendour and the music of Delius. Musically, I want to dub this thing “feminine psychedelia.” Deliciously weird. Antares Auto-Tune Evo Pitch Correcting Plug-In Click image to view full size version The Worldwide Standard in Affordable Professional Pitch Correction If you need Auto-Tune's world standard pitch correction, but not Auto-Tune 7's time manipulation or other new features (click here for a quick comparison of Auto-Tune features), then Auto-Tune Evo is the plug-in for you. It gives you all the power and sonic goodness of Auto-Tune's full-featured Automatic and Graphical pitch correction, pitch shifting and throat modeling, at an attractively affordable price. Core Functions

Wheeler's delayed choice experiment Wheeler's delayed choice experiment is actually several thought experiments in quantum physics, proposed by John Archibald Wheeler, with the most prominent among them appearing in 1978 and 1984.[1] These experiments are attempts to decide whether light somehow "senses" the experimental apparatus in the double-slit experiment it will travel through and adjusts its behavior to fit by assuming the appropriate determinate state for it, or whether light remains in an indeterminate state, neither wave nor particle, and responds to the "questions" asked of it by responding in either a wave-consistent manner or a particle-consistent manner depending on the experimental arrangements that ask these "questions."[2] This line of experimentation proved very difficult to carry out when it was first conceived. Nevertheless, it has proven very valuable over the years since it has led researchers to provide "increasingly sophisticated demonstrations of the wave–particle duality of single quanta

Hospital radio Typical hospital radio studio Hospital radio is a form of audio broadcasting produced specifically for the in-patients of hospitals. It is primarily found in the United Kingdom, hospital radio has been found to be beneficial to patients lifting their mood and aiding recovery.