The Essential Secrets of Songwriting Blog 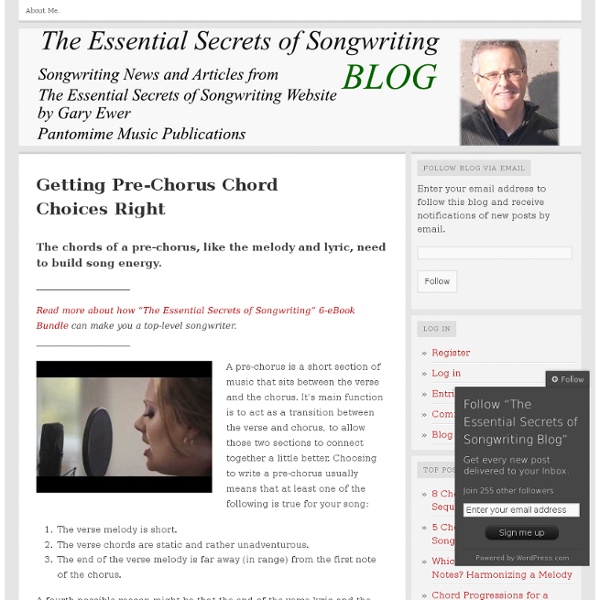 Some Interesting Keyboards Some books about music refer to a persistent "myth" that it is possible, using only two keyboards, to construct an instrument on which it is possible to play music in any key using just intonation. Indeed, it is true that it is not possible, with only 24 keys to the octave, to construct an instrument that will play in perfect just intonation in every key. However, it is possible to exhibit an example of the type of keyboard that has given rise to this "myth", so that its capabilities, as well as its limitations, can be seen. Thus, what may be constructed with 24 keys to the octave is a keyboard which allows playing diatonic music in just intonation in any of the twelve conventionally designated keys, even if nothing can be ensured concerning the pitch of accidentals, and with the provision that one has to make a jump in pitch when one transposes around the far end of the circle of fifths. This will be shown explicitly below. The most obvious design: This is the Wicki-Hayden keyboard.

Music Theory for Musicians and Normal People by Toby W. Rush This page includes links to each of the individual Music Theory pages I've created in PDF form. This is a work in progress; I am writing new ones regularly and fixing errors and omissions on existing ones as I find them. If you find them useful for your theory studies, you are welcome to use them, and if you find errors or have suggestions, I invite you to contact me. Click the thumbnails to view or download each page as a PDF for free! These pages are available for free under a Creative Commons BY-NC-ND license. This collection is a work in progress, but if you would prefer, you can download all the current pages as a single PDF. Each and every one of these pages is available is an 18" x 24" poster. These pages are available in multiple translations and localizations! Interested in helping translate these pages to your own language? What is Music Theory? And why are all these cool and attractive people studying it? Notation: Pitch Notation: Rhythm Notation: Meter Beaming Triads

A different way to visualize rhythm - John Varney To learn more on circular perceptions of rhythm with specific reference to African music, read this paper and then watch this Five(ish) Minute Drum Lesson on African Drumming. How has drumming played an essential role in African culture? What do specific rhythms represent? Interested in the software applications of a circular rhythmic approach? What exactly is rhythm? How does the beat of a song differ from its rhythm? As seen from this TED Ed lesson, different cultures share similar rhythms. Rhythm and Math are related? Just love music and want to learn more? How playing an instrument benefits your brain - Anita Collins Why we love repetition in music - Elizabeth Hellmuth Margulis Music as a language -Victor Wooten

Music theory Music theory considers the practices and possibilities of music. It is generally derived from observation of how musicians and composers actually make music, but includes hypothetical speculation. Most commonly, the term describes the academic study and analysis of fundamental elements of music such as pitch, rhythm, harmony, and form, but also refers to descriptions, concepts, or beliefs related to music. Because of the ever-expanding conception of what constitutes music (see Definition of music), a more inclusive definition could be that music theory is the consideration of any sonic phenomena, including silence, as it relates to music. Music theory is a subfield of musicology, which is itself a subfield within the overarching field of the arts and humanities. The development, preservation, and transmission of music theory may be found in oral and practical music-making traditions, musical instruments, and other artifacts. History of music theory[edit] Fundamentals of music[edit] Play .

How maths helps us understand why music moves people Music is known to provoke the senses, give pleasure and sometimes move people to tears. Surely this has little to do with mathematical models which are so frequently associated with cold and rational logic. So what can maths tell us about this powerful phenomenon closely connected to the emotions? Can mathematics help us measure what’s sublime or ineffable about a piece of music? Music evokes strong emotions such as frisson (goose bumps), awe and laughter – and has been found to use the same reward pathways as food, drugs and sex to induce pleasure. On one end of the spectrum, a performance or a piece of music that does just what you’d expect runs the risk of becoming banal. Author provided Listen PDQ Bach: The Short-tempered Clavier: Minuet in C Download MP3 / 735 KB The craving that comes from musical anticipation and the euphoria that follows the reward have both been found to be linked to dopamine release. Playing with expectations Listen Happy Birthday (first part) Download MP3 / 284 KB

Nashville number system The Nashville Number System can be used by someone with only a rudimentary background in music theory. Improvisation structures can be explained using numbers and chord changes can be communicated mid-song by holding up the corresponding number of fingers. The system is flexible, and can be embellished to include more information (such as chord color or to denote a bass note in an inverted chord). Scale degrees and major chords[edit] The Nashville Number System, (also referred to as NNS) is similar to (movable-do) Solfège, which uses "Do Re Mi Fa Sol La Ti" to represent the seven scale degrees of the Major scale. In the key of C, the numbers would correspond as follows: In the key of B♭, the numbers would be B♭=1, C=2, D=3, E♭=4, F=5, G=6, A=7. The key may be specified at the top of the written chord chart, or given orally by the bandleader, record producer or lead singer. So in the key of C, the Nashville Number System notation: Chord type[edit] Chord qualities[edit] Example[edit] Play ):