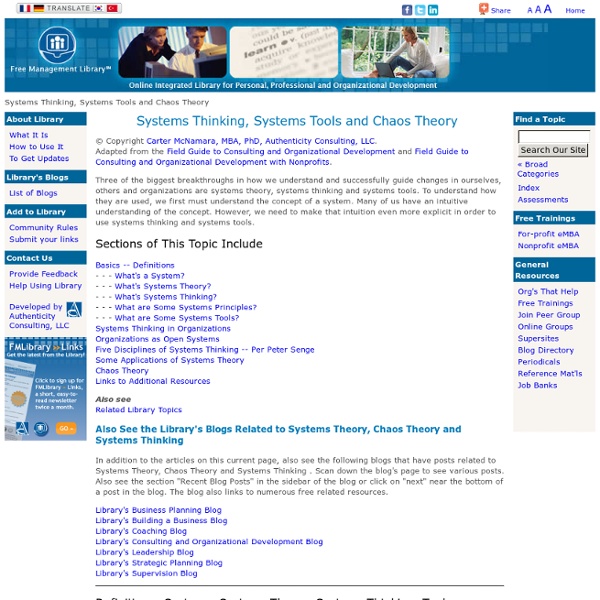 © Copyright Carter McNamara, MBA, PhD, Authenticity Consulting, LLC. Adapted from the Field Guide to Consulting and Organizational Development and Field Guide to Consulting and Organizational Development with Nonprofits. Three of the biggest breakthroughs in how we understand and successfully guide changes in ourselves, others and organizations are systems theory, systems thinking and systems tools. To understand how they are used, we first must understand the concept of a system. Many of us have an intuitive understanding of the concept. However, we need to make that intuition even more explicit in order to use systems thinking and systems tools. Sections of This Topic Include Basics -- Definitions - - - What's a System? Also seeRelated Library Topics Also See the Library's Blogs Related to Systems Theory, Chaos Theory and Systems Thinking Definitions: Systems, Systems Theory, Systems Thinking, Tools What's a System? Systems range from simple to complex. A pile of sand is not a system.

The Paradigm Shift of Systems Theory I. The Perspective of Systems Theory and its Relationship to the Traditional Mainstream Sciences, and its Approach to Mental Illness “Systems theory” is the name given to both a broad perspective and a large body of knowledge which has formed through the original efforts of many men and women in the last century, all of whom were working under the impulses of an important epistemological paradigm shift. That shift- the implications of which are too numerous and transformative to state or explain adequately in one place- was from the causal/linear and reductionist perspective that had largely dominated scientific thinking in their time, to an interactional perspective that explored reality in important new ways. From the perspective of the traditional sciences, the paradigm shift of systems theory was and is both radical and subversive. A Radical Shift Running for Cover To these pained souls, responses can be given. The Myth of Mental Illness But where is the problem? II.

systemdynamics.de BBC Systems Practice - Managing Complexity Copyrighted image Credit: The Open University Open2.net fades away... For ten years, give or take, Open2.net was the online home of Open University and BBC programming. Over the last few months, though, we've been moving into OpenLearn, creating one home for all The Open University's free learning content. It means we share a home with the Open University's iTunesU and YouTube channels, and much more besides. You can use the navigation at the top of this page to explore what we have on offer. Most of the content from Open2.net has been brought across; if you've landed here after typing or searching for an Open2.net URL then you're probably looking for something that fitted into one of these categories: Open2 forums We still want you to join in, comment and share your views. Open2 blogs All the blog content from Open2 is here on OpenLearn - it might be that you're trying to find a specific URL for the content that isn't being recognised by OpenLearn. Other Open2 pages

Knowledge Management Yes, knowledge management is the hottest subject of the day. The question is: what is this activity called knowledge management, and why is it so important to each and every one of us? The following writings, articles, and links offer some emerging perspectives in response to these questions. As you read on, you can determine whether it all makes any sense or not. Content Developing a Context Like water, this rising tide of data can be viewed as an abundant, vital and necessary resource. Before attempting to address the question of knowledge management, it's probably appropriate to develop some perspective regarding this stuff called knowledge, which there seems to be such a desire to manage, really is. A collection of data is not information. The idea is that information, knowledge, and wisdom are more than simply collections. We begin with data, which is just a meaningless point in space and time, without reference to either space or time. An Example A Continuum Extending the Concept

Critical Thinking Course Description: Critical Thinking is an introductory course in the principles of good reasoning. It covers pretty much the same subject as what is usually taught in practical logic, informal reasoning or the study of argumentation. This means that the main focus of the course lies in arguments, their nature, their use and their import. However, there are two major differences. The above features make Critical Thinking at once less formal and more dynamic than Logic. The present course is designed to serve as a methodical preparation for more effective reasoning and improved cognitive skills. The course includes the following areas of study: Introductory: Concepts, Propositions. Course Texts: The course is based on these textbooks and their incorporated or accompanying materials. Format: This course combines lectures, interpretive exercises in the assigned texts and practical logical exercises, classroom discussions, pop quizzes, tests, mind-teasers and exams. Objectives: Requirements:

Thinking with systems—Part 1 | Beyond this Brief Anomaly This week’s post is the first in a three-part introduction to the formal language of energy, as a foundation for subsequent discussion about just what it is that the energy concept deals with. My aim is to cover some essential ideas here—where they come from, how they relate to one another—in sufficient detail for later inquiry into the higher-level relationships between energy and societal futures. A central purpose of the approach I’m advocating is to maintain a connection between our understanding and use of energy-related concepts, and day-to-day experience of our physical world. It’s my contention that we might then be better placed to appreciate and respond to the societal dilemmas we’re confronted with through clear eyes—as free as possible from the fog of confused conceptions. In last week’s post, I introduced the energy concept as the capacity to do work or transfer heat. In the most straightforward terms, what it is, is a system. An introduction to systems

Opinion: Biodiversity Impacts Humanity Increasing evidence suggests that loss of Earth’s biological diversity will compromise our planet’s ability to provide the goods and services societies need to prosper. A biosphere designed for the 1967 World Expedition on St Helen's Island in Montreal, QuebecWIKIMEDIA, RENE EHRHARDTRecall the biosphere experiments from the 1990s, the most famous of which was perhaps Biosphere II. Philanthropist Ed Bass provided $200 million to construct the largest completely enclosed ecosystem ever created. Biologists and engineers spent 4 years designing and landscaping Biosphere II to have all of the systems needed to sustain life: agriculture for food production, rainforests to regulate the artificial atmosphere, even a mini-ocean to control temperature. Whether one views Biosphere II as a monumental failure or magnificent learning experience, it was a sobering reminder that we still don’t have even a basic understanding of how to design a biological system that can sustain human life. So what?

Systems thinking Impression of systems thinking about society[1] A system is composed of interrelated parts or components (structures) that cooperate in processes (behavior). Natural systems include biological entities, ocean currents, the climate, the solar system and ecosystems. Designed systems include airplanes, software systems, technologies and machines of all kinds, government agencies and business systems. Systems Thinking has at least some roots in the General System Theory that was advanced by Ludwig von Bertalanffy in the 1940s and furthered by Ross Ashby in the 1950s. Systems thinking has been applied to problem solving, by viewing "problems" as parts of an overall system, rather than reacting to specific parts, outcomes or events and potentially contributing to further development of unintended consequences. Systems science thinking attempts to illustrate how small catalytic events that are separated by distance and time can be the cause of significant changes in complex systems.

Adapting to a New Economy IN HIS 2006 BOOK on evolutionary economics, The Origin of Wealth, McKinsey Global Institute Fellow Eric Beinhocker suggests that new ways of thinking could take economic policy beyond the simplistic paradigm of left versus right. Harnessing the unpredictable complexities of evolutionary selection to spur economic growth and social well-being should be the goal. “We may not be able to predict or direct economic evolution,” Beinhocker writes, “but we can design our institutions and societies to be better or worse evolvers.” An evolution-informed policy would not merely let the free market sort out the strong and profitable from the weak and bankrupt, as Milton Friedman (who used the natural selection analogy in his own essay “The Methodology of Positive Economics”) would have had it. In biology, Hodgson reminds us, evolution does not produce objectively “better” species, but merely species effectively adapted to their current environment. “At the moment, we’re a ways from that.

AVID Leadership Dr. Sandy Husk, Chief Executive Officer Dr. As superintendent of Salem-Keizer Public Schools in Oregon, her leadership resulted in the implementation of a districtwide strategic plan with an accountability system for all schools and departments. Prior to Salem-Keizer Public Schools, Sandy served five years as the director of schools for the Clarksville-Montgomery County School System in Clarksville, Tennessee. Sandy earned her Ph.D. in Administration, Curriculum & Supervision from the University of Colorado, Denver; her M.A. in Guidance and Counseling from the University of Colorado, Boulder; and her B.S. in Elementary Education from the University of Georgia, Athens. top Robert Gira – Executive Vice President, Quality, Communications, and Research Rob joined AVID Center in 1994 and is currently responsible for overseeing AVID Center's research, communications, and quality teams. Michelle Mullen – Executive Vice President, Curriculum and Learning Mark S. Granger B. Dr. Dr. Dr. Dr. Dr.

Master of Business Administration (MBA) You are viewing Australian and NZ students' course information. Change to view international students' course information. Overview Early graduation options You may be able to graduate sooner with: Ranked in the top three nationally by the Australian Financial Review BOSS MBA Ranking in 2013. Details The program will teach you to challenge conventions and go beyond established pathways, and equip you to lead and manage decisively in a complex business world. MBA brochure, (PDF file, 404 KB) Units Download course structures and unit outlines for Master of Business Administration (MBA) The MBA program is made up four components that build on each other to provide you with an integrated and multi disciplinary curriculum to equip you to take on the challenges and opportunities of a complex business environment. Each MBA unit of six credit points is delivered in a seven-week module (six weeks teaching with final assessment in week seven). 1. 2. 3. Entrepreneurship and Innovation 4. Entry requirements