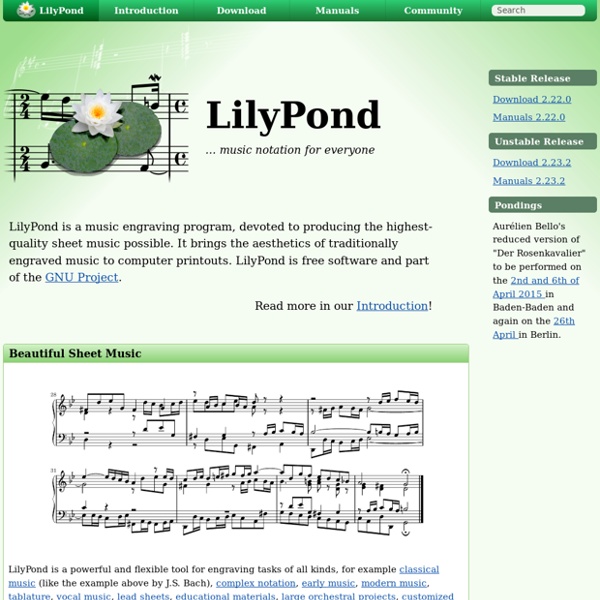 LilyPond production named BEST EDITION 2014 March 11, 2014 We are thrilled to announce that the new edition of the songs of Oskar Fried (1871-1941), published recently by our fellow contributors Urs Liska and Janek Warchoł [1], will receive the "Musikeditionspreis BEST EDITION 2014" of the German Music Publishers’ Association [2]! The ceremony will take place in a few days at the Frankfurt Musikmesse [3]. We congratulate Janek and Urs for gaining such public recognition of typographical and editorial excellence of their work. We are also delighted to inform you that they intend to make their work available under a Free license as soon as the publisher expenses are covered. Please support this initiative by buying the printed volume through the publisher [4] or by pledging a contribution at the Indiegogo campaign [5]!

6 Open Source Software Projects of (Musical) Notation As it's been pointed out before, there seems to be a sizable overlap between open source hardware and software enthusiasts and amateur musicians. And while some of you are making music through the tried-and-true "let's see what that button does" method, there are a few of you who might be interested in composing music the old-fashioned way -- digitally producing paper-based music sheets. Whether you're writing music for the guitar, learning how to improvise jazz solos, or writing entire music scores, chances are that one of the pieces of open source software listed below can make the process a little easier. Generalized Music Notation Software

Free Music Writing, Music Notation Software - Finale Notepad Etude in Eb minor, Frédéric Chopin Dubussy excerpt - With Human Playback Dubussy excerpt - No Human Playback 210 Awesome Open Guitar Chords and How to Use Them - A Kings Mercury Are you bored of the sound of standard chords? Then, using open guitar chords is a way to pimp up your playing and boring chord progressions. There are thousands of open guitar chords and millions of ways to use them creatively. In this post I introduce you to the world of open chords with a brief introduction, a library of 210 open guitar chords and some ideas on how to use them properly. Open chords are chords that have at least one open string like this shape of E-minor x7x087. Within this definition standard chords like C-major x32010 are also open chords because of their open strings.

Sight-reading Caravaggio's Rest on the Flight into Egypt (1594–96) Terminology[edit] Sight-reading[edit] Authors in music literature commonly use the term "sight-reading" generically for "the ability to read and produce both instrumental and vocal music at first sight ... the conversion of musical information from sight to sound" (Udtaisuk 2005). Udtaisuk and some other authors prefer the use of the more specific terms "sight-playing" and "sight-singing" where applicable. This differentiation leaves a third more restricted use of the term "sight-reading" for the silent reading of music without creating sound by instrument or voice. Music Theory for Musicians and Normal People by Toby W. Rush This page includes links to each of the individual Music Theory pages I've created in PDF form. This is a work in progress; I am writing new ones regularly and fixing errors and omissions on existing ones as I find them. If you find them useful for your theory studies, you are welcome to use them, and if you find errors or have suggestions, I invite you to contact me. Enjoy!

Chord (music) Mussorgsky's Pictures at an Exhibition "Promenade", is a piece showing an explicit chord progression.(Nattiez 1990, p. 218) Play In the medieval era, early Christian hymns featured organum (which used the simultaneous perfect intervals of a fourth, a fifth, and an octave[13]), with chord progressions and harmony an incidental result of the emphasis on melodic lines during the medieval and then Renaissance (15-17th centuries).[7][14] The Romantic period, the 19th century, featured increased chromaticism.[7] Composers began to use secondary dominants in the Baroque, and they became common in the Romantic period.[19] Many contemporary popular Western genres continue to rely on simple diatonic harmony, though far from universally:[20] notable exceptions include the music of film scores, which often use chromatic, atonal or post-tonal harmony, and modern jazz (especially circa 1960), in which chords may include up to seven notes (and occasionally more).[21] Macro analysis for triads on C.

Polychord Bitonal polychord: F major on top of C major.[1] Play The use of polychords may suggest bitonality or polytonality. Quartal and quintal harmony Four note quartal chord Play . Analysis[edit] Definition[edit] Analytical difficulties[edit] Scale (music) Pattern of intervals in the C-major scale Play A measure of the width of each scale step provides a method to classify scales. For instance, in a chromatic scale each scale step represents a semitone interval, while a major scale is defined by the interval pattern T–T–S–T–T–T–S, where T stands for whole tone (an interval spanning two semitones), and S stands for semitone.

Harmony practice 3 Simple entry positioning:set the current voice - bass, tenor, alto, soprano, then select a note, or rest, and click a position in the score. Should the entry result incorrect, keep the mouse button down, or click the entry again, and drag it to the desired location. Alternatively, select the repitch tool (an orange coloured arrow in the Accessory tools palette) and perform dragging. Simple entry erasing: set the current voice - bass, tenor, alto, soprano, then right click an entry, select Delete item from the fast menu. Alternatively, use the eraser tool (from the Accessory tools palette). Selection: partial and whole measure selection is allowed.

Glossary of musical terminology This is a list of musical terms that are likely to be encountered in printed scores, music reviews, and program notes. Most of the terms are Italian (see also Italian musical terms used in English), in accordance with the Italian origins of many European musical conventions. Sometimes, the special musical meanings of these phrases differ from the original or current Italian meanings. Most of the other terms are taken from French and German, indicated by "Fr." and "Ger. Understanding Basic Music Theory - Free online course Understanding Basic Music Theory is a comprehensive insight into the fundamental notions of music theory: music notation, rules of harmony, ear training, etc. It covers most of the topics needed to understand and develop your musical skills - with your favorite training tool EarMaster of course! This fantastic mine of information was written by Catherine Schmidt-Jones et al. and originally published on OpenStax CNX.