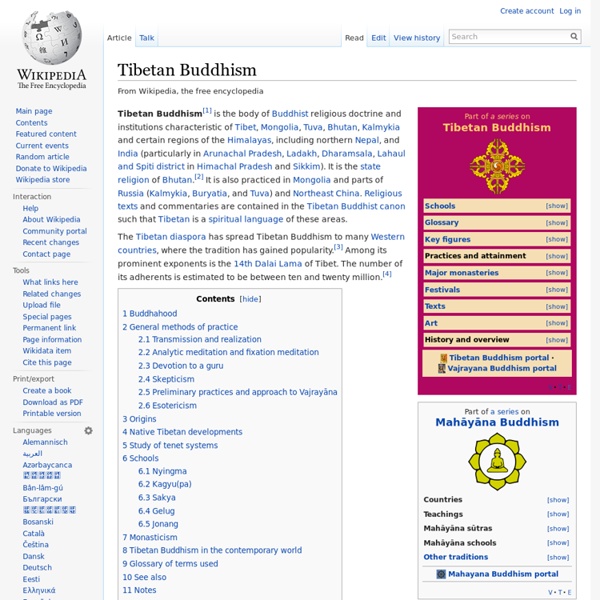 Tibetan Buddhism[1] is the body of Buddhist religious doctrine and institutions characteristic of Tibet, Mongolia, Tuva, Bhutan, Kalmykia and certain regions of the Himalayas, including northern Nepal, and India (particularly in Arunachal Pradesh, Ladakh, Dharamsala, Lahaul and Spiti district in Himachal Pradesh and Sikkim). It is the state religion of Bhutan.[2] It is also practiced in Mongolia and parts of Russia (Kalmykia, Buryatia, and Tuva) and Northeast China. Religious texts and commentaries are contained in the Tibetan Buddhist canon such that Tibetan is a spiritual language of these areas. The Tibetan diaspora has spread Tibetan Buddhism to many Western countries, where the tradition has gained popularity.[3] Among its prominent exponents is the 14th Dalai Lama of Tibet. Buddhahood[edit] General methods of practice[edit] Transmission and realization[edit] Analytic meditation and fixation meditation[edit] Spontaneous realization on the basis of transmission is possible but rare. Related:  Music Theory

Dzogchen According to Tibetan Buddhism and Bön, Dzogchen (Rdzogs chen or Atiyoga) is the natural, primordial state or natural condition, and a body of teachings and meditation practices aimed at realizing that condition. Dzogchen, or "Great Perfection", is a central teaching of the Nyingma school also practiced by adherents of other Tibetan Buddhist sects. According to Dzogchen literature, Dzogchen is the highest and most definitive path to enlightenment.[1] From the perspective of Dzogchen, the ultimate nature of all sentient beings is said to be pure, all-encompassing, primordial clarity or naturally occurring timeless clarity. This intrinsic clarity has no form of its own and yet is capable of perceiving, experiencing, reflecting, or expressing all form. It does so without being affected by those forms in any ultimate, permanent way. Nomenclature and etymology[edit] Maha Ati[edit] Esoteric transmission[edit] Background[edit] Indian originators[edit] Prahevajra (Tib. Tibet[edit] Padmasambhava (Tib.

Anarchy In Your Head » Archive » The Slave Test Are you a slave? Recently I wrote about how governments manufacture and evoke powerful symbols to essentially brainwash us and keep us obedient. I used an analogy of similar tactics in the past to efficiently maintain the obedience of household slaves. I have a friend who claims my language is far too strong. The slave test is very simple and fair. So let’s consider what it really means to be a slave. An important part of the slave test is to avoid engaging in any aggressive behavior that might actually justify violent intervention. Bearing that in mind, the slave test is incredibly simple. Stay tuned!

Sacred geometry As worldview and cosmology[edit] The belief that God created the universe according to a geometric plan has ancient origins. Plutarch attributed the belief to Plato, writing that "Plato said God geometrizes continually" (Convivialium disputationum, liber 8,2). In modern times the mathematician Carl Friedrich Gauss adapted this quote, saying "God arithmetizes".[2] At least as late as Johannes Kepler (1571–1630), a belief in the geometric underpinnings of the cosmos persisted among scientists. Closeup of inner section of the Kepler's Platonic solid model of planetary spacing in the Solar system from Mysterium Cosmographicum (1596) which ultimately proved to be inaccurate Natural forms[edit] Art and architecture[edit] Geometric ratios, and geometric figures were often employed in the design of Egyptian, ancient Indian, Greek and Roman architecture. In Hinduism[edit] Unanchored geometry[edit] Music[edit] See also[edit] Notes[edit] Further reading[edit] External links[edit] Sacred geometry at DMOZ

Vajrayana Vajrayāna (Sanskrit: वज्रयान, Bengali: বজ্রযান) is also known as Tantric Buddhism, Tantrayāna, Mantrayāna, Secret Mantra, Esoteric Buddhism and the Diamond Way or Thunderbolt Way. The Lama and the Guru yoga are central in this system.[1] Vajrayāna is a complex and multifaceted system of Buddhist thought and practice which evolved over several centuries. Founded by Indian Mahāsiddhas, Vajrayāna subscribes to Buddhist tantric literature. History of Vajrayāna[edit] Although the first tantric Buddhist texts appeared in India in the 3rd century and continued to appear until the 12th century, scholars such as Hirakawa Akira assert that the Vajrayāna probably came into existence in the 6th or 7th century, while the term Vajrayāna itself first appeared in the 8th century. India[edit] Historical origins[edit] Mantrayana and Vajrayana[edit] There are differing theories as to where in the Indian sub-continent that Vajrayāna began. The earliest texts appeared around the early 4th century. China[edit]

Meditation Meditation is a practice in which an individual trains the mind or induces a mode of consciousness, either to realize some benefit[1] or as an end in itself.[2] The term meditation refers to a broad variety of practices (much like the term sports) that includes techniques designed to promote relaxation, build internal energy or life force (qi, ki, prana, etc.) and develop compassion,[3] love, patience, generosity and forgiveness. A particularly ambitious form of meditation aims at effortlessly sustained single-pointed concentration[4] single-pointed analysis,[5] meant to enable its practitioner to enjoy an indestructible sense of well-being while engaging in any life activity. Meditation may involve generating an emotional state for the purpose of analyzing that state—such as anger, hatred, etc. Etymology[edit] The English meditation is derived from the Latin meditatio, from a verb meditari, meaning "to think, contemplate, devise, ponder".[13] History[edit] Man Meditating in a Garden Setting

Danny Carey Biography[edit] Born in Lawrence, Kansas, Carey's first encounter with the drums began at the age of ten by joining the school band and taking private lessons on the snare drum.[1] Two years later, Carey began to practice on a drum set. In his senior year of high school in Paola, Kansas, Carey joined the high school jazz band and began to study under drumming great Ben Kelso specifically for jazz drumming training. Religion and the occult[edit] Although Carey has not officially aligned himself with any particular school of philosophy or religion, he has projected a deep interest in and understanding for the magical arts - among them various occult teachings. Geometric designs[edit] Side projects and other musical endeavours[edit] In his time away from Tool, Carey has contributed (and still regularly does) to a vast number of projects: Equipment[edit] Current tour kit (2006-2007)[edit] Drum Heads (Evans):(Occasionally uses Remo skins with other projects.) Drumming techniques[edit]

Instrumental Hip-Hop Sucks. Ban It Forever. - San Francisco Music - All Shook Down ​ Instrumental hip-hop should be banned. It's the banal, meandering stepchild of hip-hop. It's a front-runner for the dubious honor of being the world's most snooze-inducing form of music. And, shockingly, there are still producers and fans who insist on validating it like it's anything but sample-based Chinese water-torture -- one of whom, RJD2, will be airing out his oh-so-atmospheric productions at Manor West on Wednesday, Feb.1. Beyond playing spot-the-samples, listening to the entirety of an instrumental project from the likes of Madlib, RJD2, or J Dilla -- who now presumably spends his days pestering heaven's denizens with the unreleased off-cuts from his bizarrely worshipped Donuts ruse -- is a feat requiring the ability to numb your mind while practicing saintly levels of patience. But that quaint, nostalgia-saturated scene has nothing to do with the modern idea of instrumental hip-hop. It's a formula that never works.

The Mathematics of Tuning & Temperament, with audio examples. Contents 1. Introduction 2. General Mathematical Basis 3. The Principle Tuning Systems 3.1 Pythagorean Tuning 3.2 Ptolemaic Tuning: "just intonation" 3.3 Mean-tone Temperament 3.4 Equal Temperament 4. Harmonic Comparison 4.1 Perfect 5ths 4.2 Major 3rds 4.3 Major 6ths 5. 1. Almost all Western music is based upon the diatonic scale, having seven notes within an octave. This description of the mathematical basis is very abridged. 2. For pure monophonic (one note at a time) musical melody, it does not matter a great deal what scale or tuning method is used. 3:2, perfect fifth 4:3, fourth 5:3, major sixth 5:4, major third 6:5, minor third 8:5, minor sixth All four of the main tuning systems considered here were devised around some or most of these intervals. 3. NOTE: The values given as "cents" represent the intervals where the octave is divided into 1200 cents. 3.1 Pythagorean Tuning Western music is generally considered to have started from Pythagoras, the ancient Greek. 4. 4.2 Major Thirds