How To Play And Name ALL The Three Note Chords On Piano. A Compendium of Lessons on Music & Piano Technique. Theory and Composition Hosted By Rick Louie. Music Theory for EDM Series.

This page includes links to each of the individual Music Theory pages I've created in PDF form. This is a work in progress; I am writing new ones regularly and fixing errors and omissions on existing ones as I find them. These pages are available for free under a Creative Commons BY-NC-ND license. This collection is a work in progress, but if you would prefer, you can download all the current pages as a single PDF. Ravenspiral Guide to Music Theory. A crash course in music theory : edmproduction. How Music Works with Howard Goodall - 01 - Melody (Full Show) Notes for Little Composers. Ear Trainer. Theory Lessons. Lessons.

When it comes to MIDI orchestration, the string section is probably the most difficult to emulate. 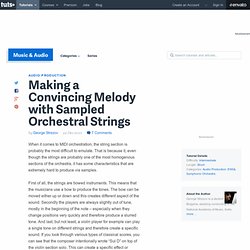 That is because it, even though the strings are probably one of the most homogenous sections of the orchestra, it has some characteristics that are extremely hard to produce via samples. First of all, the strings are bowed instruments. This means that the musicians use a bow to produce the tones. The bow can be moved either up or down and this creates different aspect of the sound. Secondly the players are always slightly out of tune, mostly in the beginning of the note – especially when they change positions very quickly and therefore produce a slurred tone. As you have probably guessed, most of the work on MIDI orchestration goes for string melodies.

So before we continue to the actual tutorial, I'd like to offer you some things that you should consider, observe and watch. Go to classical concerts. Step One: Creating the Melody This is the melody we will be using. I hope this helps you. The 10 best lectures on electronic music ever; watch them now. Thanks to the wonders of the internet, one’s quest for knowledge really has no limitations. 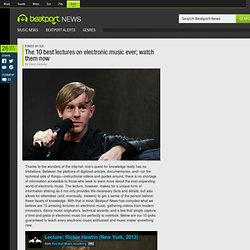 Between the plethora of digitized articles, documentaries, and—on the technical side of things—instructional videos and guides around, there is no shortage of information accessible to those who seek to learn more about the ever-expanding world of electronic music. The lecture, however, makes for a unique form of information sharing as it not only provides the necessary facts and details, but also allows for attendees (and, eventually, viewers) to get a sense of the person behind these facets of knowledge. With that in mind, Beatport News has compiled what we believe are 10 amazing lectures on electronic music, gathering videos from modern innovators, dance music originators, technical wizards, and a few that simply capture a time and place in electronic music too perfectly to overlook. Lessons. Which chords work together?

Learn How to Play Jazz Guitar Chords Download your free ebook and explore the world of jazz guitar Type your name & email below Chord progressions are a succession of chords played one after another and during a specified duration. 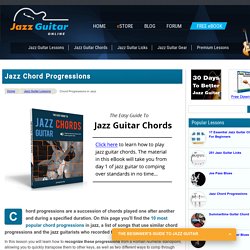 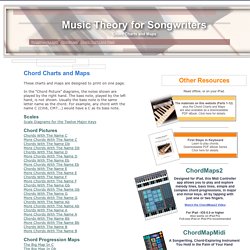 In the “Chord Picture” diagrams, the notes shown are played by the right hand. The bass note, played by the left hand, is not shown. Usually the bass note is the same letter name as the chord. For example, any chord with the name C (Cm6, CM7...) would have a C as its bass note. Scales. Map1.gif (GIF Image, 248 × 588 pixels) Lessons.