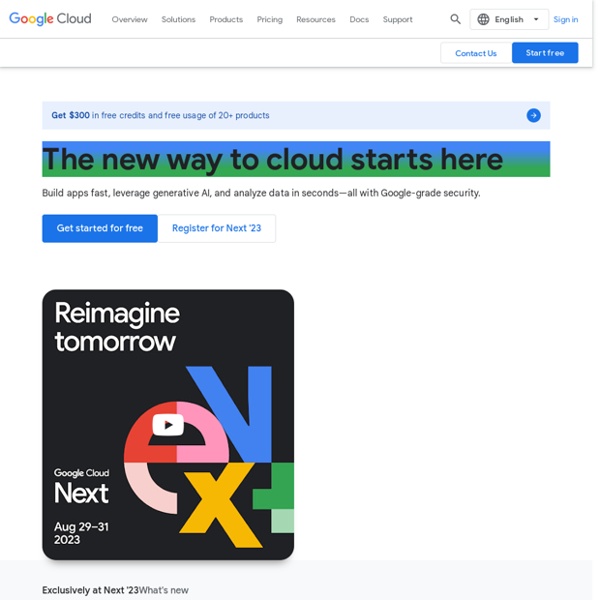 Blogger 21 hours ago Google Cloud Platform expands to Asia Pacific When Applibot needed a flexible computing architecture to help them grow in the competitive mobile gaming market in Japan, they turned to Google Cloud Platform. When Tagtoo, a online content tagging startup, needed to tap into the power of... Read more on Blogger

Make interactive games with Fungus & Unity3D - no coding! Paul McGrath is an Animator from Dublin, Ireland. He studied animation in the renowned Ballyfermot College in Dublin, but has yet to be nominated for an Oscar like some of his peers. After graduating, he went to work for Shepard Films in Dublin for a few months and then moved to LA to work as SFX designer for Hyperion Films. Back in Ireland, he continued specialising in SFX design for Shepard Films, after which he co-founded Kavaleer Productions. He wore several hats in the company –from making tea to producing and everything in between from 1999 to 2003, when he went to Australia for a change of scenery and a break from the rain.

A Collaboration Tool Your Team Will Actually Use Before Choosing an Online Collaboration Tool Understand You and Your Company’s Needs Empowering workers with collaboration tools can increase productivity, help keep deliverables on track, and improve overall workflow. There are plenty of online options available regardless of industry. How Azure Pricing Works Microsoft Azure allows you to quickly deploy infrastructures and services to meet all of your business needs. You can run Windows and Linux based applications in 19 Azure datacenter regions, delivered with enterprise grade SLAs. Sign-up and start a free trial today.

The Simple Way to Scrape an HTML Table: Google Docs Raw data is the best data, but a lot of public data can still only be found in tables rather than as directly machine-readable files. One example is the FDIC’s List of Failed Banks. Here is a simple trick to scrape such data from a website: Use Google Docs. The table on that page is even relatively nice because it includes some JavaScript to sort it. But a large table with close to 200 entries is still not exactly the best way to analyze that data.

The Earth Moves TERRA TRACTUS: The Earth Moves continues the Projects2k tradition of tremendous and multifaceted performance making. This year we look at the geological history of the Earth, and the Stony Creek Quarry itself, as they evolve through ancient history to our projected future through elemental, tectonic, and man-made forces. (from the Projects2K website) In April of 2014 Daniel Fine approached me about working on a show that was going to be staged and performed in a granite quarry in Branford Connecticut. I’ve worked with Dan on several complex site specific shows, and working in an active quarry seemed like a logical next step.

10 Tech Tools To Engage Students Websites, apps and devices help teachers teach and kids learn in new ways. Check out these 10 great education tech choices. 1 of 11 Information technology has become so tightly woven into our workday and personal lives that it's hard to imagine life without it. Gartner’s cloud showdown: Amazon Web Services vs. Microsoft Azure Gartner IaaS Research Director Kyle Hilgendorf says one of the most common questions he gets from enterprise customers looking to go to the cloud is: AWS or Azure? Amazon Web Services has been anointed the public IaaS cloud leader by Gartner and many others, but over the past year or so Satya Nadella’s Microsoft has made significant advancements to its public cloud platform. AWS now has competition. AWS clearly has a lead, and a pretty sizeable one, Hilgendorf says. But, it’s a marathon, not a sprint: “The race has just begun, and it’s a very long race,” Hilgendorf said during a presentation at AWS re:Invent comparing the two providers.

Free textures for your next web project. The seigaiha or wave is a pattern of layered concentric circles creating arches, symbolic of waves or water and representing surges of good luck. Made by Olga Libby Download A friend gave me a cork wallet. I scanned it and made this. Design I/O - JOHN LENNON: THE BERMUDA TAPES John Lennon: The Bermuda Tapes in an interactive Album App that tells the story of John Lennon’s life changing journey, sailing through a mid-Atlantic storm to Bermuda in June 1980. The Bermuda Tapes allows users to literally sail to Bermuda, seeing the journey and the creative re-discovery that it triggered through Lennon’s eyes and hearing the very early demo recordings he made while in Bermuda. The app album allows users to explore the very intimate artistic and collaborative process Lennon had with Yoko Ono, working with the early songs and finally leading to the release of his final recording, Double Fantasy: A Heart Play. The Bermuda Tapes comprises of six chapters of interactive and immersive storytelling and is narrated by John Lennon, Yoko Ono, The B52s, the ship’s captain and the crew among others.

The Best Tech Tools for Teachers Members of the Education World Tech Team reveal the best technology tools for teachers. Included: Suggestions for using those tools in and out of the classroom. We asked members of the Education World Tech Team to tell us about the technology tools they find most useful in their professional lives and about the technology -- hardware, software, programs, applications, Web sites-- they use most often and most successfully with their students. 24 Cloud Storage Solutions for Small Businesses Cloud storage can save your business. Disasters happen, devices get misplaced and you never know when you'll need access to your files on the go. Whether a spill fries your machine, your mobile device gets lost or stolen or you need instant access to your documents, cloud storage places all of your data at your fingertips. Cloud storage serves several purposes. It can act as a Web-based external hard drive without the clunky hardware; a data backup source for disaster recovery; a file-sharing platform to collaborate with or send supersize files to clients and colleagues; and a productivity tool for anytime, anywhere access to your files from any device.