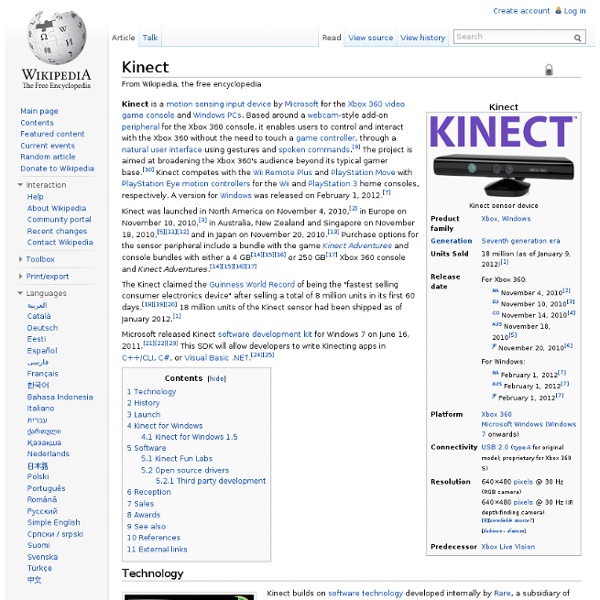 Kinect (codenamed in development as Project Natal) is a line of motion sensing input devices by Microsoft for Xbox 360 and Xbox One video game consoles and Windows PCs. Based around a webcam-style add-on peripheral, it enables users to control and interact with their console/computer without the need for a game controller, through a natural user interface using gestures and spoken commands.[9] The first-generation Kinect was first introduced in November 2010 in an attempt to broaden Xbox 360's audience beyond its typical gamer base.[10] A version for Windows was released on February 1, 2012.[6] Kinect competes with several motion controllers on other home consoles, such as Wii Remote Plus for Wii, PlayStation Move/PlayStation Eye for PlayStation 3, and PlayStation Camera for PlayStation 4. Technology Kinect sensor[9] is a horizontal bar connected to a small base with a motorized pivot and is designed to be positioned lengthwise above or below the video display. History Launch Related:  Kinect - LeaPmotion • Kinect Hackz

Getting Started with Kinect and Processing So, you want to use the Kinect in Processing. Great. This page will serve to document the current state of my Processing Kinect library, with some tips and info. The current state of affairs Since the kinect launched in November 2010, there have been several models released. Kinect 1414: This is the original kinect and works with the library documented on this page in Processing 2.1 Kinect 1473: This looks identical to the 1414, but is an updated model. Now, before you proceed, you could also consider using the SimpleOpenNI library and read Greg Borenstein’s Making Things See book. I’m ready to get started right now What hardware do I need? First you need a “stand-alone” kinect (model 1414 only for now!). Standalone Kinect Sensor If you have a previous kinect that came with an XBox, it will not include the USB adapter. Kinect Sensor Power Supply Um, what is Processing? What if I don’t want to use Processing? ofxKinectKinect CinderBlock More resources from: The OpenKinect Project So now what? 1.

EyeToy The EyeToy is a color digital camera device, similar to a webcam, for the PlayStation 2. The technology uses computer vision and gesture recognition to process images taken by the camera. This allows players to interact with games using motion, color detection and also sound, through its built-in microphone. It was released in October 2003. The camera is manufactured by Logitech (known as "Logicool" in Japan), although newer EyeToys are manufactured by Namtai. History[edit] The EyeToy was conceived by Richard Marks in 1999, after witnessing a demonstration of the PlayStation 2 at the 1999 Game Developers Conference in San Jose, California.[5] Marks's idea was to enable natural user interface and mixed reality video game applications using an inexpensive webcam, using the computational power of the PlayStation 2 to implement computer vision and gesture recognition technologies. Design[edit] The camera is mounted on a pivot, allowing for positioning. Use with computers[edit] Games[edit]

Kinect to help the blind ‘see’ in augmented reality | ImmersiveTech The system in question, which was designed by graduate students at the Universität Konstanz in Germany, has been dubbed the NAVI, or Navigational Aids for the Visually Impaired. NAVI works something like this. The infrared camera from a Kinect system is mounted to a helmet that can be worn by a bilnd person. The visual data from that camera is turned into a set of audio instructions that are then transmitted to the wearer via a wireless headset. The system also features a standard camera added as well, allowing for a kind of three-camera stereoscopic vision. The goal is to be able to give a blind person warnings about potential obstructions and directions to navigate in set spaces, at a longer distance than the current systems in place. The system is also paired with a vibro-tactile arduino system in the belt, that will most likely act as a warning system, should an obstacle come perilously close to the user.

Synapse for Kinect SYNAPSE for Kinect Update: There’s some newer Kinect hardware out there, “Kinect for Windows”. This hardware is slightly different, and doesn’t work with Synapse. Be careful when purchasing, Synapse only supports “Kinect for Xbox”. Update to the update: There appears to also be newer “Kinect for Xbox” hardware out there. List of Kinect games Official Xbox 360 Kinect banner used on Xbox 360 Kinect game covers This is an incomplete list of released and announced games that support or require the Kinect motion controller for the Xbox 360.[1][2] There are currently 129 (Upcoming games: 2; Existing games: 127) games on this list. This list does not include Xbox Live Arcade Kinect games, which are detailed in their own articles. Released games[edit] Announced games[edit] See also[edit] References[edit] External links[edit]

How-to: Successfully Install Kinect on Windows (OpenNI and NITE) UPDATE: For more Kinect blog posts, consider visiting my new website pterneas.com. The website will always be up-to-date with the latest SDKs and sensors. Playing Kinect games is a really great experience. Programming for Kinect is even greater! Browsing the web, you can find many cool "hacks" (CLNUI, OpenKinect) which allow Kinect be used by a PC rather than an XBOX. Via these hacks, we gain access to Kinect's cameras (color and depth), LED, accelerometer and motor. Fortunately, PrimeSense, the company behind Kinect, released OpenNI framework and NITE middleware. Prerequisites OpenNI and NITE installation can be painful if not done properly. Step 0 Uninstall any previews drivers, such as CLNUI. Step 1 Download Kinect Drivers and unzip. Drivers are now installed in your PC. Step 2 Download and install the latest stable or unstable OpenNI Binaries from OpenNI website. Step 3 Download and install the latest stable or unstable OpenNI Compliant Middleware Binaries (NITE) from OpenNI website.

Kinect Guide to Using Synapse with Quartz Composer Ryan Challinor wrote an incredibly useful tool for speeding up the set up process involved with using your Kinect sensor with Apple's free visual programming tool Quartz Composer. I was able to easily set up a quick demo where A particle system with a halo effect would follow my left hand along the X and Y axis. Incredibly easy to set up with a very rewarding end result. First you'll need to download Synapse. Since this guide uses Quartz Composer so you'll only need to download Mac version of Synapse for Kinect. You'll also need to download the Quartz Composer plugin qcOSC in order to send OSC joint messages QC. For those of you new to Quartz Composer (As I was when I frist tried this out) I had to use finder to open it up. Open up a "New Blank" and start following the instructions in Ryan's excellent YouTube video demo. As a little extra help, here's a screen capture of the "visual code" layout I ended up with after all was said and done. Click to Enlarge

Softkinetic DaVinci Goes Touchless With XBox Kinect The launch of Xbox Kinect has caused much excitement in the open source community. In the last few weeks, developers have managed to tap into the hardware with impressive results. We’ve seen applications ranging from gesture-based experiences to 3D imaging. We’ve taken this exciting opportunity to port our popular DaVinci experience to the Kinect platform. To date, many of the experiments in gestural interface development have not taken into account the hands. Gesture-based interaction is great when touch isn’t practical. To be honest, we had a blast playing with this experience. “Control, control, you must learn control.” – Yoda Share

OpenKinect NI mate Documentation (last update 22.1.2012) | NI Mate General Delicode NI mate is a program that uses OpenNI standard compliant devices such as the Microsoft Kinect, the ASUS Xtion and the PrimeSense Carmine to track body movement, converting this motion data into standard OSC or MIDI messages that can be received in any client program. Installation On Windows If you have previously installed SensorKinect, OpenNI or NITE, it's strongly recommended that you either uninstall all of them or update them to the latest versions before installing Delicode NI mate. If you have any other device drivers (like the Kinect for Windows SDK) installed other than SensorKinect you must uninstall these before installing Delicode NI mate. On Windows Vista and Windows 7 it doesn't matter if your sensor device is connected or not during the install. In order to use the non-OpenNI2 version of NI mate on Windows 8 please follow the instructions for Windows 8 below. Installation options: Windows 8 (non-OpenNI2 version of NI mate) Windows XP On OS X On Ubuntu 12.04 Either or

Setting up Kinect on Mac — black label creative Update 27/04/2013: Latest test of the OpenNI 2.1.0 beta and NITE2 was good but it’s not working with the SimpleOpenNI library yet. I’ll keep watching for updates and let you know when it’s all running. Thanks to open source projects like OpenNI and OpenKinect, you can now use Microsoft’s Kinect on more than just Windows. The main parts involved here are OpenNI, SensorKinect, NITE. Which Kinect? The hardware and interface differences mean that, for this guide and my experience at least, you will need an Xbox Kinect. Before we begin There are some things you’ll need to install before we can start with the Kinect utilities. First up is Xcode. Secondly you’ll need to get MacPorts. It’s worth restarting at the point (if MacPorts doesn’t get you to do it anyway) just to make sure any dependencies that are loaded at startup are there. Note: There is some command line in here and some sudo. The dependencies sudo port install libtool Once that’s done, restart you computer. The Kinect Install OpenNI

Introducing Kiretu - A Kinect reconstruction tutor - OpenKinect | Google Groupes Hi Antonio, > Daniel[1], you are right. I am quite new to mailing-lists/Google Groups and still accustomed to use Nicknames at the Internet. But i changed the name. :-) > This will save me a lot of time I would have spent fetching info here > and there, thanks. That's exactly what my intention was! > Would you add some info about the difference between doing calibration > with RGBDemo and using the registration data from the Kinect itself? Oh, I am asking myself if this is possible?! > A pure libfreenect solution will be even grater, maybe we can even fix > examples/glpclview.c to use the registration data? I took a look at glpclview.c and found So it looks that this example uses default calibration-parameter and does the same computations I did (even if the way is a bit different, because it is solved with matrix-multiplications). Regards, Daniel