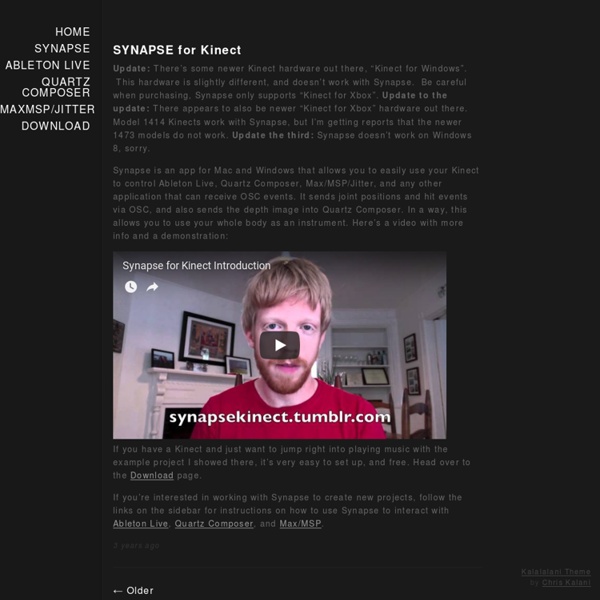 SYNAPSE for Kinect Update: There’s some newer Kinect hardware out there, “Kinect for Windows”. This hardware is slightly different, and doesn’t work with Synapse. Be careful when purchasing, Synapse only supports “Kinect for Xbox”. Update to the update: There appears to also be newer “Kinect for Xbox” hardware out there. Model 1414 Kinects work with Synapse, but I’m getting reports that the newer 1473 models do not work. Update the third: Synapse doesn’t work on Windows 8, sorry.Synapse is an app for Mac and Windows that allows you to easily use your Kinect to control Ableton Live, Quartz Composer, Max/MSP/Jitter, and any other application that can receive OSC events.

Kiel Figgins - Animator Rig Set 9 Rig by Steven Kalinowski, Facial setup by Dan Neufeldt model by CGNetworks (Maya 5-6, 2.5mb) WinRar Required Updated: 8/29/06 - Finger and Toe Controls hooked up. Thanks Stev jpbellona simpleKinect Application simpleKinect is an interface application for sending data from the Microsoft Kinect to any OSC-enabled application. The application attempts to improve upon similar software by offering more openni features and more user control. Kinect Kinect (codenamed in development as Project Natal) is a line of motion sensing input devices by Microsoft for Xbox 360 and Xbox One video game consoles and Windows PCs. Based around a webcam-style add-on peripheral, it enables users to control and interact with their console/computer without the need for a game controller, through a natural user interface using gestures and spoken commands.[9] The first-generation Kinect was first introduced in November 2010 in an attempt to broaden Xbox 360's audience beyond its typical gamer base.[10] A version for Windows was released on February 1, 2012.[6] Kinect competes with several motion controllers on other home consoles, such as Wii Remote Plus for Wii, PlayStation Move/PlayStation Eye for PlayStation 3, and PlayStation Camera for PlayStation 4. Technology Kinect sensor[9] is a horizontal bar connected to a small base with a motorized pivot and is designed to be positioned lengthwise above or below the video display. History Launch

toxi.co.uk 1. system requirements to successfully run this application and its modules the following hardware is required as minimum configuration:Pentium 3, 800MHz+ CPUWindows 2k/XP64MB+ RAMGeForce3 or better graphics card (16MB+ VRAM)DirectX 7 or OpenGLSoundcard input functionalityup-to-date sound and video card driversstandard keyboard please note that for a show/exhibition environment a better configuration is desired. software has been written & tested on: Dell Inspiron 8500, 1.4GHz Pentium 4, 512MB RAM, GeForce 4Go with 64MB VRAM, SigmaTel soundcard. 2. installation this app can be run from anywhere on your hard disk or even directly from CD, although in the latter case it is advised to have a fast CD-ROM drive to avoid delays when switching between modules. no other installation process is necessary. simply launch the file "macronaut_hub_v019.exe" and follow the instructions below.

Max/Msp to Kinect Via OSC for Offical Microsoft SDK Today I finished the very first stages of my 4th year research project which was finding a way to take data from the Xbox Kinect and send it to Max/Msp. By using the Ventuz OSC C# wrapper i was able to pack all the X, Y, Z data for all the skeletal points into an OSC bundle and send that to Max where it was unpacked in the patch. The data sent from the Kinect is the unchanged co-ordinate system of values in metres rangeing from -1 to 1. That being said the data sent from Kinect to Max can be used by any device that is capable of reading OSC packets .The format of the OSC message is Motion capture data BVH tools and files For everybody who is interest in using motion capture data, here is a list of services which could be useful to you. Most of them are free or are very affordable. Free Motion Capture Data Files: Over 2500 files at CG Speed:

Daniel Shiffman The Microsoft Kinect sensor is a peripheral device (designed for XBox and windows PCs) that functions much like a webcam. However, in addition to providing an RGB image, it also provides a depth map. Meaning for every pixel seen by the sensor, the Kinect measures distance from the sensor. Getting Started with Kinect and Processing So, you want to use the Kinect in Processing. Great. This page will serve to document the current state of my Processing Kinect library, with some tips and info. al jazari Al-Jazari was an influential scholar and engineer who lived at the beginning of the 13th century, this project was inspired by his robot musicians who were designed to play at royal drinking parties. More info Live coding is the art of programming in front of an audience. Screens are projected in order to display the entire process to the audience, thus making computer based performances more interesting and inclusive.

OpenNI to Max/MSP via OSC – tohm judson OpenNI is a “natural interaction” software that uses the Kinect for XBox 360. Using this, connected to a Mac, we can control various software via OSC. Here, I will show you how to get the data into Max.