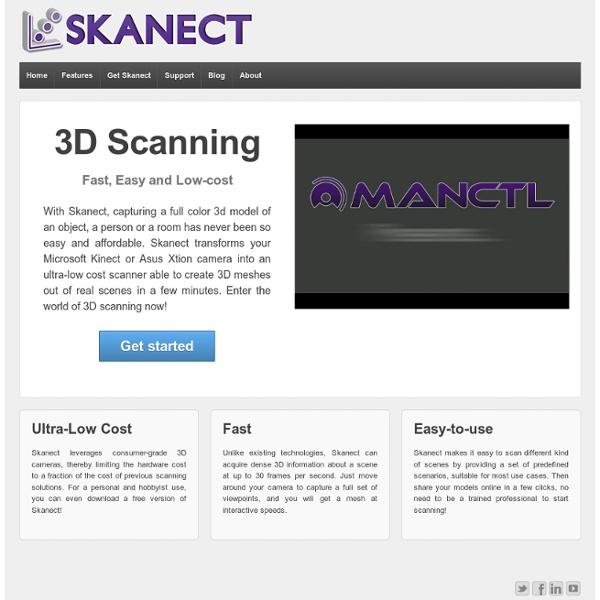 ReconstructMe and Realistic 3D Scans May 10, 2012 in Scanning by Tim Owens I’ve been playing recently with a great new piece of software called ReconstructMe which is free for now and Windows only. It uses the Xbox Kinect (an incredibly worthwhile investment for 3D scanning) to create 3D models. 3D Scan 2.0 Scanning The only things you need are our framework, the Kinect and some AR markers. Therefor we constructed some Scan Tablets Point Cloud After scanning the object you get a colored point cloud. See more point clouds in our 3D Gallery ! How It Works With KScan3D, you can quickly and easily scan, edit, process, and export data for use with your favorite 3D modeling software. Here's how it works: Kinect and Xtion sensors gather data.

Demonstration of RGB Demo0.7 on UBuntu12.04 - 3d reconstruction using kinect Installing Libfreenect Installing Open-NI, Sensor kinect, Avin2Sensor patch and NITE ( Note : only 1.5xx versions work with RGB demo source not the github) Installing PCL-1.6 Installing OpenCV-2.3.1 Installing RGB demo Installing QT Note: PCL-1.6, OpenCV2.3.1 and QT libraries should be downloaded from Ubuntu repositories, otherwise there will be a conflict Getting started with OpenKinect (Libfreenect) Here are the list of Ubuntu Kinect Installation commands. Install the following dependencies.The first line in each of the listings below takes care of this step:

iverse: Cerberus by Steve Graber Derivative of the Rostock 3D delta printer - [cc by sa 3.0] Cerberus is an experimental 3D Delta Robot printer that uses spectra filament for the vertical carriage drive system instead of traditional toothed belts. Please be aware that there will probably (and most likely) be significant changes and improvements made to this design. - A photo gallery of the Ceberus prototype can be found in the G+ gallery here: Using Kinfu Large Scale to generate a textured mesh This tutorial demonstrates how to use KinFu Large Scale to produce a mesh (in meters) from a room, and apply texture information in post-processing for a more appealing visual result. The first part of this tutorial shows how to obtain the TSDF cloud from KinFu Large Scale. The second part shows how to convert the TSDF cloud into a uniform mesh. The third part shows how to texture the obtained mesh using the RGB images and poses we obtained from KinFu Large Scale. TSDF Cloud This section describes the TSDF Cloud, which is the expected output of KinFu Large Scale.

Kintinuous: Spatially Extended KinectFusion Download:PDF “Kintinuous: Spatially Extended KinectFusion” by T. Whelan, M. SLAMDemo - rtabmap - Demo of 6DoF RGBD SLAM using RTAB-Map - RTAB-Map : Real-Time Appearance-Based Mapping In this example, we use a hand-held Kinect sensor: we assemble incrementally the map depending on the 6D visual odometry, then when a loop closure is detected using RTAB-Map, TORO is used to optimize the map with the new constraint. We did two loops in the IntRoLab robotic laboratory of the 3IT . The first image below is the final map without optimizations. The second image is the final map with TORO optimizations with RTAB-Map detected constraints. The third and fourth images are closer examples of before and after map optimizations. The ROS bag for the demo is here : kinect_720.bag .

Kinect Fusion Kinect for Windows 1.7, 1.8 KinectFusion provides 3D object scanning and model creation using a Kinect for Windows sensor. The user can paint a scene with the Kinect camera and simultaneously see, and interact with, a detailed 3D model of the scene. Kinect Fusion can be run at interactive rates on supported GPUs, and can run at non-interactive rates on a variety of hardware.