Getting Started with Kinect and Processing 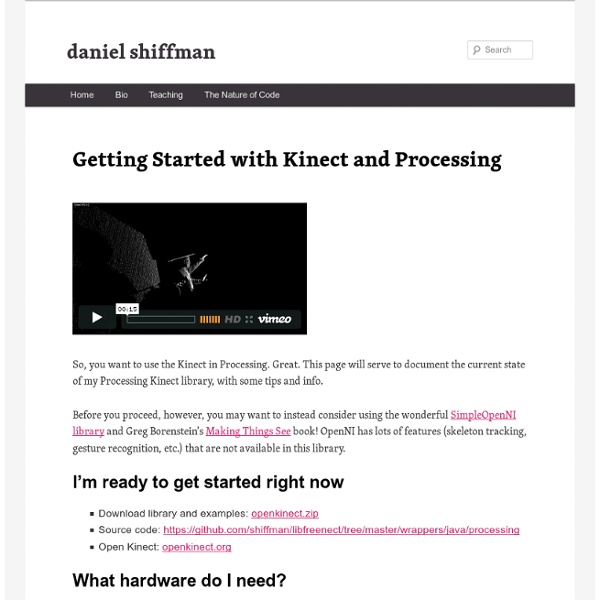 So, you want to use the Kinect in Processing. Great. This page will serve to document the current state of my Processing Kinect library, with some tips and info. The current state of affairs Since the kinect launched in November 2010, there have been several models released. Here's a quick list of what is out there and what is supported in Processing for Mac OS X. Kinect 1414: This is the original kinect and works with the library documented on this page in Processing 2.1 Kinect 1473: This looks identical to the 1414, but is an updated model. Now, before you proceed, you could also consider using the SimpleOpenNI library and read Greg Borenstein’s Making Things See book. I’m ready to get started right now What hardware do I need? First you need a “stand-alone” kinect (model 1414 only for now!). Standalone Kinect Sensor If you have a previous kinect that came with an XBox, it will not include the USB adapter. Kinect Sensor Power Supply Um, what is Processing? ofxKinectKinect CinderBlock Lots!

Deece Records: Kinect simpleKinect simpleKinect is an interface application for sending data from the Microsoft Kinect to any OSC-enabled application. The application attempts to improve upon similar software by offering more openni features and more user control. Kinect Guide to Using Synapse with Quartz Composer Ryan Challinor wrote an incredibly useful tool for speeding up the set up process involved with using your Kinect sensor with Apple's free visual programming tool Quartz Composer. I was able to easily set up a quick demo where A particle system with a halo effect would follow my left hand along the X and Y axis. Incredibly easy to set up with a very rewarding end result. First you'll need to download Synapse. Since this guide uses Quartz Composer so you'll only need to download Mac version of Synapse for Kinect. You can download it from the original source of from our resource section right here.

simple-openni - OpenNI library for Processing This project is a simple OpenNI and NITE wrapper for Processing. Therefore not all functions of OpenNI are supported, it's meant more to deliver a simple access to the functionality of this library. For a detailed list of changes see the ChangeLog Version 1.96 Support for Win32/64, OSX32/64, Linux64 Installation is now much simpler --- OpenNI2 --- Version 0.26 Added the autocalibration, now you can only enter the scene and get the skeleton data without the psi pose Updated the examples to enable auto-calibration (User, User3d) Unified the SimpleOpenNI distribution library, from now there is only one library distribution for OSX,Windows and Linux. Had to make this change because of the Processing 2.0 autoinstaller.

Kinect Kinect (codenamed in development as Project Natal) is a line of motion sensing input devices by Microsoft for Xbox 360 and Xbox One video game consoles and Windows PCs. Based around a webcam-style add-on peripheral, it enables users to control and interact with their console/computer without the need for a game controller, through a natural user interface using gestures and spoken commands.[9] The first-generation Kinect was first introduced in November 2010 in an attempt to broaden Xbox 360's audience beyond its typical gamer base.[10] A version for Windows was released on February 1, 2012.[6] Kinect competes with several motion controllers on other home consoles, such as Wii Remote Plus for Wii, PlayStation Move/PlayStation Eye for PlayStation 3, and PlayStation Camera for PlayStation 4. Technology Kinect sensor[9] is a horizontal bar connected to a small base with a motorized pivot and is designed to be positioned lengthwise above or below the video display. History

Digital Puppetry: Tryplex Makes Kinect Skeleton Tracking Easier, for Free, with Quartz Composer Via the experimentation of the movement+music+visual collective in Ireland, we see another great, free tool built on Apple’s Quartz Composer developer tool. Tryplex is a set of macro patches, all open source, that makes Kinect skeleton tracking easier. There’s even a puppet tool and skeleton recorder. Aesthetically, the video below is all stick-figure stuff (which is the only reason I can imagine why it’s getting any dislikes on YouTube). But it shouldn’t take much imagination to see the potential here. For one example, see the video at top — something that must make Terry Gilliam get hot and bothered (or wish he had been born later).

Synapse for Kinect SYNAPSE for Kinect Update: There’s some newer Kinect hardware out there, “Kinect for Windows”. This hardware is slightly different, and doesn’t work with Synapse. Be careful when purchasing, Synapse only supports “Kinect for Xbox”. Update to the update: There appears to also be newer “Kinect for Xbox” hardware out there. Model 1414 Kinects work with Synapse, but I’m getting reports that the newer 1473 models do not work.