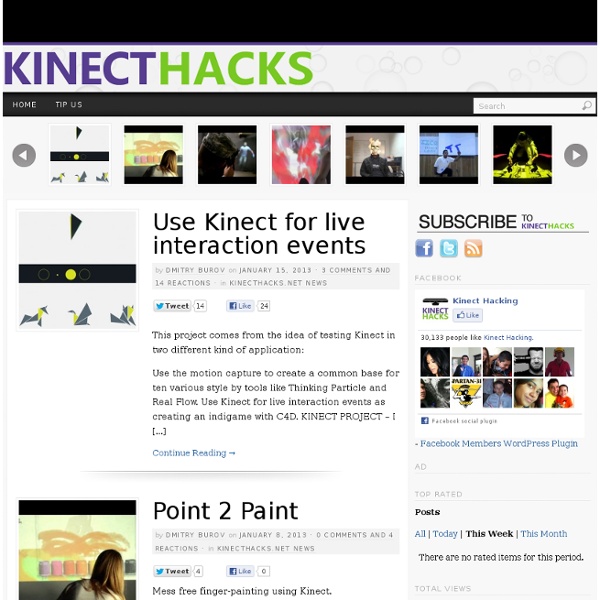 CLNUI 4 Java (Kinect) Kinect is a new product from Microsoft for XBox360. With an RGB camera, a 3D depth sensor (structured IR light) and a multi-array microphone , it is able to compute a depth map, something very interesting for the interactive world of creativity and gaming. Nothing new as technology, but still, interesting and cheap. Since its release people have been trying to work in order to hack it and get it to work with windows and mac OS. Quite a few people have been working on drivers and a way to hack the gadget to get access to the color/depth data. One of these people is called Alex from Code Laboratories, the man behind the PS3eye camera drivers for PC’s.

About - Goodthink Alright so this program is running some effects on a video stream, in this particular case it’s the webcam feed but it can also be a video playing (see this post) It doesn’t do anything complicated: dividing the image in pixel grids then each pixel have parameters that can be controlled (scaling, x y position of each corner of the polygon, fading speed, filled / outlined, etc…) basically a sum of effects put together make pretty tripping and unexpected results, as it’s often the case while playing with Processing. I plan to dig deeper on that one as well, an interesting effect to explore is to have each “pixel” or rather each polygon, act as intelligent agents with some rules and behaviors, on that particular sketch the only rule they follow is to go in one of 8 directions, but we can do much more interesting things than that. We could also play with gradients, alpha, and overlay effects, etc, etc… endless ;-) Details »

Interactive Art & Computational Design / Spring 2011 » Search Results » kinect Background Following on my final project from IACD Spring ’11, Kinect Portal, I wanted to pursue an Independent Study to advance several aspects of the interaction. Written in C++ using OpenFrameworks, Kinect Portal was a project that used an opaque acrylic panel in conjunction with an XBox Kinect and a projector. The first version had significant problems, chiefly the jittery-nature of the displayed image. The rectangle-fitting algorithm I had developed was rudimentary and had a lot of trouble fitting the user’s acrylic panel.

Integrating OpenNI to Unity3D Prerequisites PrimeSense sensorFor this tutorial, you will need to connect a PrimeSense sensor (PrimeSense RD1.081 or RD1.082, Asus Xtion Pro, or Asus Xtion Pro Live) to your development platform. Unity 3.5 installed Download a character asset from the Unity Asset StoreIn this tutorial, we use the soldier character, available for download under 3D Models/Character/Humanoids/Humans. Latest PrimeSense SDK installedDownload OpenNI package 20.4.2.20 from and install the OpenNI package thru the step-by-step installer.

Ideas For Dozens Intro “2H2K: LawyeR” is a multimedia project exploring the fate of legal work in a future of artificial labor and ubiquitous interactive machine learning. This project arose out of 2H2K, my ongoing collaboration with John Powers where we’re trying to use science fiction, urbanism, futurism, cinema, and visual effects to imagine what life could be like in the second half of the 21st century. One of the major themes to emerge in the 2H2K project is something we’ve taken to calling “artificial labor”.

Two Kinect talks: Open Source Bridge and ITP Camp In the last couple of weeks, I’ve given a couple of public presentations about the Kinect. This post will be a collection of relevant links, media, and follow up to those talks. The first talk, last week, was in Portland, Oregon at Open Source Bridge. It was a collaboration with Devin Chalmers, my longtime co-conspirator. We designed out talk to be as much like a circus as possible. Getting Started with Kinect and Processing So, you want to use the Kinect in Processing. Great. This page will serve to document the current state of my Processing Kinect library, with some tips and info. The current state of affairs Since the kinect launched in November 2010, there have been several models released. Here's a quick list of what is out there and what is supported in Processing for Mac OS X.

KinectSEN - Processing Kinect Resources For a little effort you can expand the opportunities for using the Kinect three fold by downloading Processing. Like the Kinect Processing is world wide, like the programs on the main page it is also free, and all these wonderful interactive programs will cost your special needs school setting nothing. Processing is a coding platform designed for artists and graphic designers. It is open source and free and can be downloaded onto PC's or Macs. You then run the Processing program and you can either write your own program or 'sketch' or, and this is where the ease comes in, you can download and open someone else's sketch from the Internet.