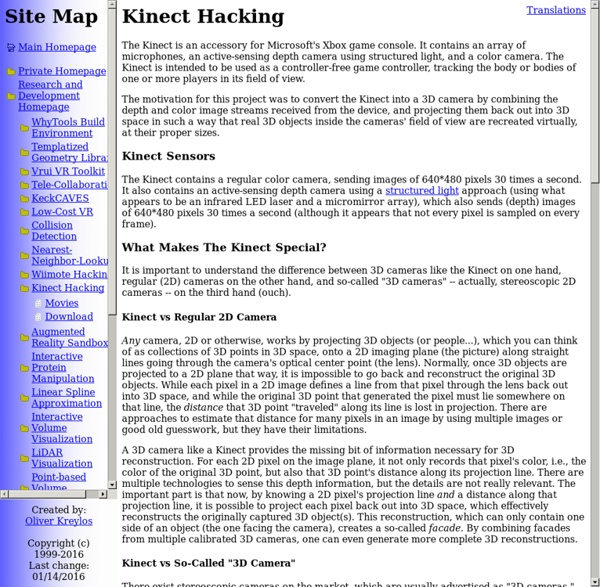 Roadmap In the current roadmap, there are several pieces of distributable software that we will produce: libfreenect The libfreenect software includes all code necessary to activate, initialize, and communicate data with the Kinect hardware. This includes drivers and a cross-platform API that works on Windows, Linux, and OS X. Finding an alternative to the Mac Mini Are there any good alternatives to the Mac Mini? I only know of the Asus Eee box. Size is an issue; performance not so much. Basically, I'm starting to think about upgrading my 2007 Mac Mini, and while I like the Mac, I'm wondering if I can get a similar computing experience from a PC alternative. I have no particular attachment to either Mac or PC, and I have a netbook running Jolicloud, so Linux could be considered. I use the computer for everything from photo editing to basic video processing, but mostly for media consumption and web surfing.Chris Taylor

Download The Augmented Reality Sandbox is free software, distributed under the GNU General Public License. To build and install the software, refer to the included README file. The process is usually as simple as "make," but some minor changes might have to be made according to the target operating system. The tarballs contain README files with rudimentary build and use instructions; please read them. Our Kinect Controlled living room Recently I created a project for a Swedish Kinect contest at Migbi.se this was my second entry, my first one (and third place winner) was my Robosapien project. I have always been fascinated by home automation, I bought my first X-10 system ten years ago. My friends thought I was insane, “-You can just get up an shut the light off". But that’s not the point, it’s not because I’m lazy it’s all about removing obstacles, what if when I enter a room the lights turns on, when I go to bed everything turns off. Saves energy, saves time, removes obstacles.

How to Do Gesture Recognition With Kinect Using Hidden Markov Models (HMMs) December 22, 2011 (@11:33 am) Note: The precious little I know about machine learning I learned from the brilliant Frank Wood, whose talk at the Machine Learning meetup inspired me to finally put together this post. I also worked with my friend Frederik Lang on the material presented here, but the shortcomings remain all my own.Microsoft’s Kinect sensor is the first large-scale, commercial release of a depth camera device—a camera that can see in 3D. Though depth cameras are not exclusive to Microsoft (and, in fact, the Kinect’s hardware design is licensed from the Israeli company, PrimeSense), Microsoft’s novel use of the device as a game controller is driven by the company’s own software for analyzing its 3D data, including proprietary algorithms for feature selection, scene analysis, motion tracking, skeletal tracking and gesture recognition. Now, suppose we want to do this kind of analysis ourselves.

Augmented Reality Sandbox Using a Kinect Want to make all your 5 year old son’s friends jealous? What if he told them he could make REAL volcanoes in his sandbox? Will this be the future of sandboxes, digitally enhanced with augmented reality? It’s not actually that hard to set up! Kinect Open Source Programming Secrets Kinect Open Source Programming Secrets (KOPS) is the only book that explains the official Java wrappers for OpenNI and NITE. (If you want installation instructions, scroll down this page a little.) The main drawback of using the PrimeSense Java wrappers is their lack of documentation. Instructions This page will hold purchase, construction, setup, and calibration instructions for an Augmented Reality (AR) Sandbox. Hardware Requirements An AR Sandbox requires the following hardware components: A computer with a good graphics card, running any version of Linux. The AR Sandbox software, in principle, also runs on Mac OS X, but we advise against it. A Microsoft Kinect 3D camera. The AR Sandbox software, or rather the underlying Kinect 3D Video Package as of version 2.8, supports all three models of the first-generation Kinect (Kinect-for-Xbox 1414 and 1473 and Kinect for Windows).

User Tracking with LabVIEW and Kinect based on the OpenNI Interface I found a way to get the user recognition to work in LabVIEW using Microsoft Kinect. It is based on the OpenNI interface with PrimeSense middleware components and drivers. A short video presenting some of the features is available: To get it working, you will need to install the previously named components. MainPage UC Davis' W.M. Keck Center for Active Visualization in the Earth Sciences (KeckCAVES), together with the UC Davis Tahoe Environmental Research Center, Lawrence Hall of Science, and ECHO Lake Aquarium and Science Center, is involved in an NSF-funded project on informal science education for freshwater lake and watershed science. As part of this project, we are primarily developing 3D visualization applications to teach earth science concepts, but we also built a hands-on exhibit combining a real sandbox, and virtual topography and water created using a closed loop of a Microsoft Kinect 3D camera, powerful simulation and visualization software, and a data projector. The resulting augmented reality (AR) sandbox allows users to create topography models by shaping real sand, which is then augmented in real time by an elevation color map, topographic contour lines, and simulated water.

Using the Kinect with LabVIEW and the Upgraded Microsoft .NET API There have been a few versions of Kinect wrappers for LabVIEW circulating since the original release of the Kinect. Many had advantages others did not (I, personally, wrote one of them), but none take advantage of the new upgrades to the Microsoft Kinect API (which actually broke some previous versions of the Kinect API). The library outlined here gives much of the basic functionality users are looking for when using the Kinect.