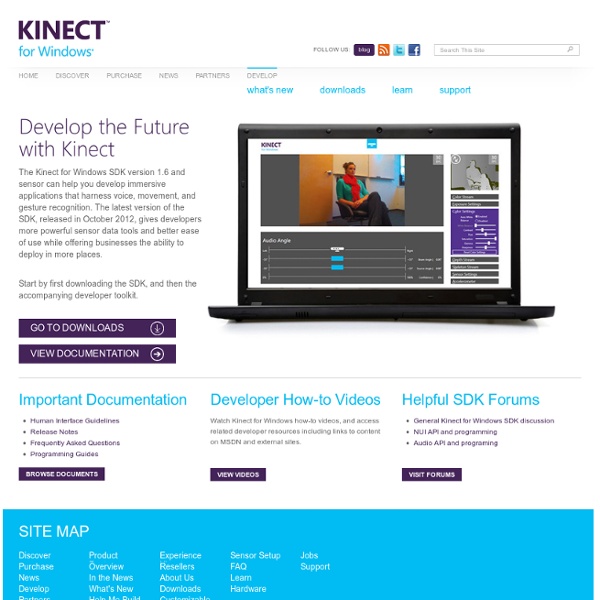 Microsoft XNA Game Studio 4.0 from Official Microsoft Download Center Microsoft XNA Game Studio 4.0 makes it easier than ever to create great video games for Windows-based PCs, Xbox 360 consoles, and Windows Phone XNA Game Studio 4.0 is a programming environment that allows you to use Visual Studio 2010 to create games for Windows Phone, the Xbox 360 console, and Windows-based computers. XNA Game Studio 4.0 includes the XNA Framework 4.0, which is a set of managed libraries designed for game development based on Microsoft .NET Framework 4. Supported Operating System Windows 7, Windows Vista, Windows XP To run XNA Framework games on a computer running a Windows operating system, you need a graphics card that supports, at minimum, Shader Model 1.1 and DirectX 9.0c. We recommend using a graphics card that supports Shader Model 2.0, which is required by some samples and starter kits. Loading your results.

Getting Started with Kinect and Processing So, you want to use the Kinect in Processing. Great. This page will serve to document the current state of my Processing Kinect library, with some tips and info. The current state of affairs Since the kinect launched in November 2010, there have been several models released. Kinect 1414: This is the original kinect and works with the library documented on this page in Processing 2.1 Kinect 1473: This looks identical to the 1414, but is an updated model. Now, before you proceed, you could also consider using the SimpleOpenNI library and read Greg Borenstein’s Making Things See book. I’m ready to get started right now What hardware do I need? First you need a “stand-alone” kinect (model 1414 only for now!). Standalone Kinect Sensor If you have a previous kinect that came with an XBox, it will not include the USB adapter. Kinect Sensor Power Supply Um, what is Processing? What if I don’t want to use Processing? ofxKinectKinect CinderBlock More resources from: The OpenKinect Project So now what? 1.