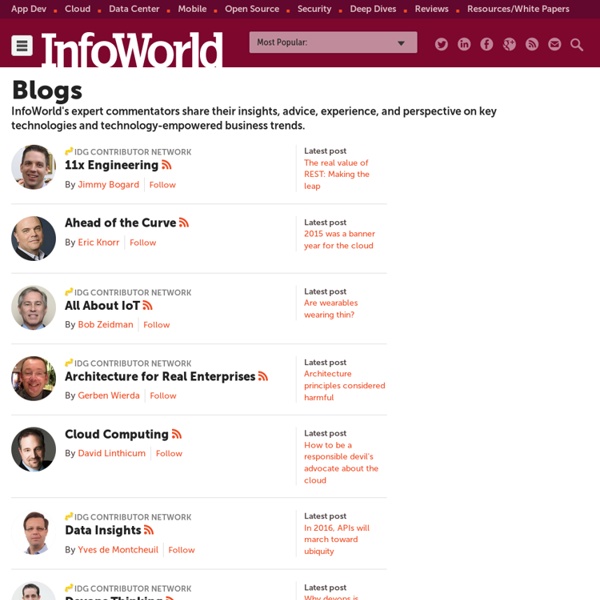 Enterprise Decision Management - a Weblog The relationship between algorithmic developments and hardware improvements has led to the immense speed-up in optimization codes over the last few decades. There has long been a debate over which improvement has done the most for forward progress. Hardware developments seem to have taken two main routes: the supercomputer and at the lower end, the multi-processor, multicore chip. The supercomputer has become even more “super”, but the special algorithms once developed for vector processing are no longer used. The situation at the low-end has been different. What of the future?

Big data is the killer app for the public cloud Big data analytics are driving rapid growth of public cloud computing. Why? It solves real problems, delivers real value, and is pretty easy to implement on public clouds. Don't take my word for it. [ Download InfoWorld's "Big Data Analytics Deep Dive" PDF special report. | From Amazon Web Services to Windows Azure, see how the elite 8 public clouds compare in the InfoWorld Test Center's review. | Stay up on the cloud with InfoWorld's Cloud Computing Report newsletter. ] TBR's latest figures reveal the extent to which public cloud providers are using big data to drive their own operations, get new customers, and expand features and functions. Public clouds providers, such as Amazon Web Services, Google, and Microsoft, offer their own brands of big data systems in their clouds, whether NoSQL or SQL, that can be had by the drink. Big data is driving public cloud adoption for fairly obvious reasons: So, big data + cloud = match made in heaven?

StumbleUpon - Wikipedia, the free encyclop StumbleUpon is a discovery engine (a form of web search engine) that finds and recommends web content to its users. Its features allow users to discover and rate Web pages, photos and videos that are personalized to their tastes and interests using peer-sourcing and social-networking principles. StumbleUpon acquired 5by in 2013 which its video discovery product.[3] History[edit] StumbleUpon was founded in November 2002[8] by Garrett Camp, Geoff Smith, Justin LaFrance and Eric Boyd during Garrett's time in post-graduate school in Calgary, Canada. The popularity of the software attracted Silicon Valley investor Brad O'Neill to take notice of the company and assist with a move to San Francisco, as well as bringing in subsequent fund-raising totaling $1.2 million from other angel investors including Ram Shriram (Google), Mitch Kapor (Mozilla Foundation), First Round Capital and Ron Conway. Service details[edit] StumbleVideo[edit] StumbleThru[edit] Su.pr[edit] Advertising[edit] Growth[edit]

Business of Life™ April 9, 2014 Suicide in the white professional class You can not underestimate the importance of family and friends in having a good and happy life. This is especially true for professional men. When Bankers and Physicians Commit Suicide Apparently, the media finds stories about Wall Street bankers killing themselves to be compelling. Another recent example is Roy Cullen, long-time president of the Cullen Foundation, Houston's most well-known charitable foundation which gave millions in 2013 who shot himself dead in a locked bedroom in his family mansion two days ago. Posted by Jill Fallon at 3:55 PM | Permalink Categories: Death and Dying Health Roundup: Ibuprofen, junk food, good food, exercise, Viagra and Glucosamine to extend life Ibuprofen. Painkillers may raise risk of irregular heartbeat that could trigger stroke. Ibuprofen Can Triple Stroke Risk; Painkillers Can Double Heart Attack Chances Junk Food: Junk food is so bad for asthmatics it can make inhalers 'useless', doctors warn

BenBishop.me.uk : Blog Archive : How to: Del.icio.us Part 1 This is part I of a II part guide to making the most of Delicious, the social bookmarking service. Part I is intended as a ‘Getting Started’ or a ‘Beginners Guide’ to Delicious, pitched at the user who has never heard of Delicious or has just signed up (its free). Part II will follow, though a continuation, it is aimed at the more experienced web user who’s interested in developing the way they use Delicious to make the most of this excellent service and the extras that have been made available. “Del.icio.us?… Social Bookmarking? Started in 2004 by Joshua Schachter, Delicious is one of the original web services that started the now clichd term, Web2.0. Most of us are familiar with the concept of bookmarking sites we like and would like to come back to (I doubt you’d be reading this now if you’re not!). Delicious is probably best summed up with the points from the ‘About’ section on their site. · Share favourites with friends, family, and colleagues. · Discover new things. Sign Me Up!

newsmap Update: Jan 20, 2012 My appologies for not updating this site lately. Flipboard has been keeping me a little busy. I'll try to work something out here soon, but in the meantime, you might want to say hello on Twitter, browse through a few photos here or peek into what it is like designing Flipboard. marumushi.com the life and work of Marcos Weskamp Marcos Weskamp is a Design Engineer who has a deep interest in playing with and visualizing lots of data. In March 2010, Marcos joined a yet-to-be-named startup in Palo Alto, where he designs, sketches, codes, serves coffee, washes dishes and leads the User Experience vision of a product that's going to be so awesome, it's going to blow your pants off. Marcos is based in Palo Alto, California, where right now it is Fri Jun 09, 10:17am and the weather is .contact: marcos@marumushi.com 404, Lalala, Document not found! Fresh From the Lab Latest News tags

Cloud computing will save us from the zombie apocalypse It's just a matter of time before we migrate our existing IT assets to public cloud systems. Additionally, it's a short window until the dead rise from the grave and attempt to eat our brains. In other words, "The Walking Dead" could be a documentary. The first thing we must ask ourselves as lumbering corpses make their way to our office building: How can the migration to the cloud save us from forever roaming the earth as zombies? Here are some guidelines that should keep you safe in case of the zombie apocalypse. [ Get the no-nonsense explanations and advice you need to take real advantage of cloud computing in InfoWorld editors' 21-page Cloud Computing Deep Dive PDF special report. | Stay up on the cloud with InfoWorld's Cloud Computing Report newsletter. ] Avoid the zombies by living with your data. As cities fall to the zombie hordes, your applications and data will automatically fail over to other cloud centers not yet infested by zombies.