Many Clouds. One API. No Problem. 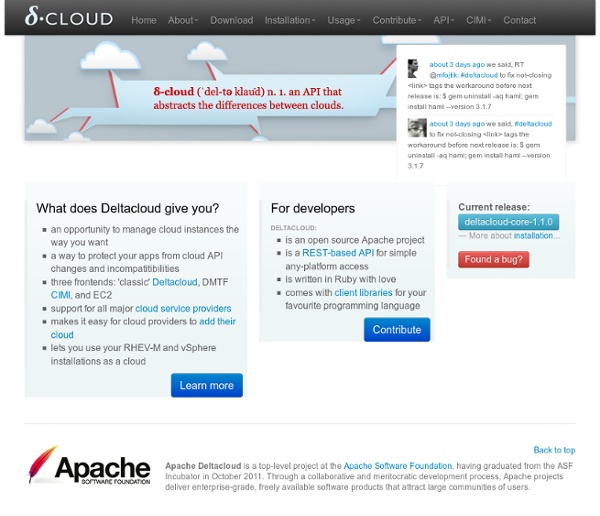 Driver for Deploying Any App to Any Cloud Available for Free Last December, a company called GigaSpaces began demonstrating a unique kind of Java-based abstraction layer made for use within cloud platforms. Cloudify is a layer that abstracts the application platform from the cloud that it's running on. So you can literally do this: You can set up and fully flesh out your SaaS application on your local system, complete with middleware, just as though it's running in the cloud. Then once it works, you relocate it. A unique cloud driver makes the homogenous application cloud run atop the specific platform cloud. The upshot is that if you can make your app run on the local platform, you can move it to Windows Azure just as easily as you can move it to Amazon EC2. On Tuesday, GigaSpaces concluded Cloudify's beta program, opening it up as a commercial service with an optional free tier. Cloudify, writes GigaSpaces architect Sean Kumar, "makes any application agnostic to the underlying deployment environment.

Open-source cloud frameworks: A work in progress Computerworld - When IT consultancy OpenCredo set out to launch three new applications within seven months for a major insurance underwriter, it had three goals in mind: Trim development time from the usual years-long pace, allow for frequent changes from the client, and build a system that can handle unpredictable traffic spikes. By using the Cloud Foundry open-source framework along with other open-source software, OpenCredo eliminated "heavy lifting" such as configuring virtual machines and adjusting the size of storage volumes, says CEO Russell Miles. The framework allowed developers to write code locally, share it with the client, and automate the integration, testing, and deployment of application components. Among other advantages, Cloud Foundry makes it easier to scale an application by adding more instances without downtime, Miles says. Even with all those benefits, open-source cloud frameworks like Cloud Foundry are a work in progress. Understanding the Basics Three Steps 1. 2.

BB Introduction ¶ OsmocomBB is an Free Software / Open Source GSM Baseband software implementation. It intends to completely replace the need for a proprietary GSM baseband software, such as drivers for the GSM analog and digital baseband (integrated and external) peripherals the GSM phone-side protocol stack, from layer 1 up to layer 3 In short: By using OsmocomBB on a compatible phone, you will be able to make and receive phone calls, send and receive SMS, etc. based on Free Software only. For more information please have a look at the ProjectRationale. Working with OsmocomBB can be challenging (technically and socially). Overview ¶ Several talks by Osmocom team member were presented at 29C3. "Let Me Answer That for You" by Nico Golde ​Abstract & Slides ​Video"Furt ... (Read more) Osmocom-BB team member Sylvain Munaut gave a talk at PHDays 2012 about abusing the calypso phones. The talk video is available [​ ... (Read more) Depending on the hardwa ... (Read more) (Read more)

Google downshifts App Engine to infrastructure cloud The Importance of Reputation Google I/O Microsoft just downshifted its Azure platform cloud so it could support raw virtual machines and any old applications companies want to cram into them, and now Google has followed suit with Compute Engine. Announced today at the Google I/O extravaganza in San Francisco by Urs Hölzle, senior vice president of infrastructure at the Chocolate Factory, Compute Engine gives Google customers what they have been asking for: Virtual machines that run on Google's vast infrastructure. And it gives Google something it wants: yet another product that can generate revenue and profits from its many large data centers scattered around the globe. To illustrate the power of Compute Engine, Hölzle talked about the Cancer Regulome Explorer application created by the Institute for Systems Biology, which used to run its genome-matching algorithms, used in cancer research, on an internal cluster with 1,000 cores. The Importance of Reputation

6 Best Free Linux Boot Utilities The Linux startup process (or boot process) is the manner in which the Linux operating system is started. The process begins with the BIOS (Basic Input/Output System) which undertakes hardware-platform specific startup tasks, and starts the partition boot code. The latter contains the first part of a Linux boot loader. The boot loader will typically give the user a choice of possible boot options. Boot time has a real impact on the first impression of the speed of a system. To provide an insight into the quality of software that is available, we have compiled a list of 6 useful boot utilities. Now, let's explore the 6 boot utilities. If you are looking for software to help you deal with a system that will not boot, you may need assistance in finding a dependable recovery tool. Return to our complete collection of Group Tests, highlighting the finest Linux software.

AWS: the good, the bad and the ugly | awe.sm: the blog Here at awe.sm we have been hosted from the beginning on Amazon Web Services (AWS). Over the past 3 years we’ve learned a lot about what it’s good at, what it’s not so good at, and have formulated our own set of best practices for running a high-availability, high-performance system, which differ in some important ways from Amazon’s own advice. We’re going to talk about two related things: For people who have heard of AWS but haven’t started using it yet, we thought we’d lay out both the benefits and the challenges we’ve encountered.For those already using AWS, we go into some detail of the best practices we’ve picked up for running a high-performance service like ours, where uptime is one of the highest priorities. It’s not an exaggeration to say that AWS has radically changed the economics of running a technology startup, but so slowly and gradually that it crept up on the industry. EC2 is a new way of running software we can deploy major upgrades on new hardware. Lessons learned