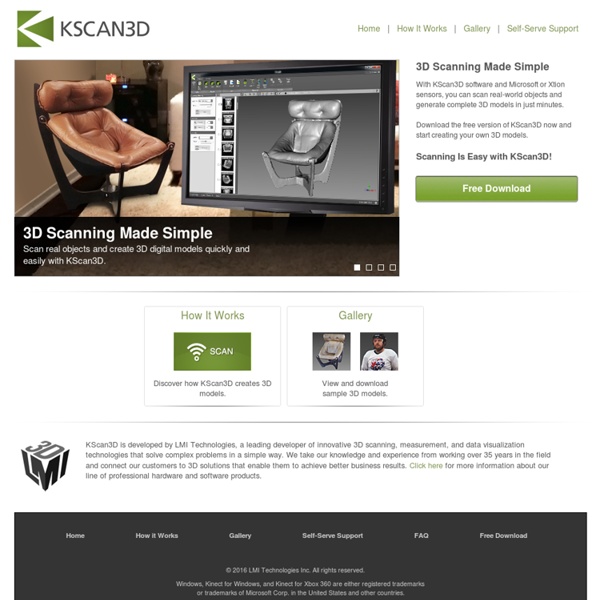 ReconstructMe and Realistic 3D Scans May 10, 2012 in Scanning by Tim Owens I’ve been playing recently with a great new piece of software called ReconstructMe which is free for now and Windows only. It uses the Xbox Kinect (an incredibly worthwhile investment for 3D scanning) to create 3D models. The greatest thing about this software is it stitches together scans in realtime so 360 degree scanning is easier than it has ever been before and the results are stunning. For this print I sat in a rolling chair with the Kinect mounted on a tripod faced at an angle and slowly turned 360 degrees to build it. I then used Tony Busers incredible video on cleaning up 3D scans to patch the holes, smooth out the rough areas, decrease the polygon count, and get a nice flat cut on the bottom to print on.

3D Scan 2.0 Scanning The only things you need are our framework, the Kinect and some AR markers. Therefor we constructed some Scan Tablets Point Cloud After scanning the object you get a colored point cloud. Get Skanect - Skanect 3D Scanning Software By Occipital 3D Scan From An iPad to Skanect on Your Mac or PC - Wirelessly There’s no easier way to capture high-quality, full-color 3D scans than with the Structure Sensor attached to your iPad streaming wirelessly to Skanect on your Mac or PC. But the Structure Sensor is much more than just a 3D scanner. It’s also a developer-friendly 3D sensing platform for mobile devices that lets you map indoor spaces, explore mixed reality worlds and much more. Compatible with iPad Air 2, iPad Air, iPad mini 2/3 and 4th Generation iPad - and it’s developer hackable to work with Android, Linux, Windows and OS X too.

Primesense Carmine 1.09 This is the Primesense Carmine 1.09 Short-range 3D Camera Sensor for short-range scanning. You can scan faces, heads, and smaller objects. It can capture motion just like the Kinect scanner which is based on the Primesense technology. Using Kinfu Large Scale to generate a textured mesh This tutorial demonstrates how to use KinFu Large Scale to produce a mesh (in meters) from a room, and apply texture information in post-processing for a more appealing visual result. The first part of this tutorial shows how to obtain the TSDF cloud from KinFu Large Scale. The second part shows how to convert the TSDF cloud into a uniform mesh. The third part shows how to texture the obtained mesh using the RGB images and poses we obtained from KinFu Large Scale. TSDF Cloud

Very easy 3D scanning software with ReconstructMe [Maxzillian] sent in a pretty amazing project he’s been beta testing called ReconstructMe. Even though this project is just the result of software developers getting bored at their job, there’s a lot of potential in the 3D scanning abilities of ReconstructMe. ReconstructMe is a software interface that allows anyone with a Kinect (or other 3D depth camera) in front of a scene and generate a 3D object on a computer in an .STL or .OBJ file. There are countless applications of this technology, such as scanning objects to duplicate with a 3D printer, or importing yourself into a video game. There are a few downsides to ReconstructMe: The only 3D sensors supported are the xBox 360 Kinect and the ASUS Xtion.

Kinect — Artec 3D Scanners 3D Scanner for fun Kinect combined with Artec Studio is an easy and inexpensive way to get started with 3D scanning. The combination of the two products will cost less than 700€ and will let you try 3D scanning in your field.

Michael Kaess @ CSAIL Here are some of my current and past projects at MIT. For my earlier work, please see my Georgia Tech web page. Kintinuous: Live Dense Mapping Kintinuous provides live dense 3D mapping of extended environments using RGB-D sensors such as Microsoft's Kinect. Unlike the original KinectFusion algorithm, we are not restricted to a small volume by the available memory on the GPU.

Matterport 3D camera aims to map your interior world, display it from the cloud March 07, 2013 08:00 AM Eastern Time Matterport Unveils $5.6 Million Funding to 3D Capture Everything, Even the Kitchen Sink MOUNTAIN VIEW, Calif.--(BUSINESS WIRE)--Matterport, the leader in rapid 3D scanning of spaces and objects, announced today that it raised a $5.6 million Series A financing round to create immersive experiences with interior spaces, starting with your home.

Kinect-carrying drone automatically builds 3D maps of rooms Google Street View eat your heart out: An MIT-built quadrocopter uses Microsoft Kinect, and some smart odometry algorithms, to fly around a room and spit out a 3D map of the environment. The drone itself is a lightweight UAV with four rotors, an antenna, protective and stabilising shielding and the guts of a Kinect sensor. It communicates with a nearby laptop, but all sensing and computation to determine position is done onboard an internal computer. The quadrocopter runs an MIT-developed real-time visual odometry algorithm to work out location and velocity estimates, which helps stabilise the vehicle during its fully autonomous 3D flight. Most small drones use GPS or pre-coded information about the area to avoid bumping into things.