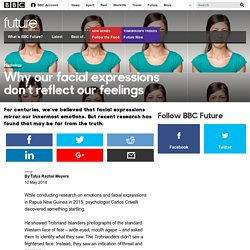 He showed Trobriand Islanders photographs of the standard Western face of fear – wide-eyed, mouth agape – and asked them to identify what they saw. The Trobrianders didn’t see a frightened face. Instead, they saw an indication of threat and aggression. Capital - How Ikea has changed the way we shop. Ingvar Kamprad, who started Ikea as a teenager, died last week at the age of 91. 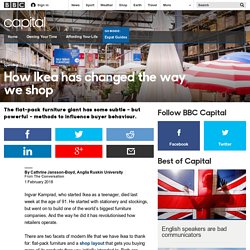 He started with stationery and stockings, but went on to build one of the world’s biggest furniture companies. And the way he did it has revolutionised how retailers operate. There are two facets of modern life that we have Ikea to thank for: flat-pack furniture and a shop layout that gets you buying more of its products than you initially intended to. Both are principles that a number of other companies have put to good use. Ikea first brought out its now signature style of flat-pack furniture in the 1950s. The simple act of touching products can increase your overall perceived value of the product When Ikea made the switch away from selling furniture that was already assembled, it was most likely unaware of how it would influence its consumers. This effect is further enhanced by the fact that touch itself is neurologically coupled with emotion.

Earth - Why you should mostly trust what science tells you. Science writer and astrophysicist Adam Becker explains how science really works to BBC Earth's Michael Marshall and Melissa Hogenboom, with help from the animators at Pomona Pictures. 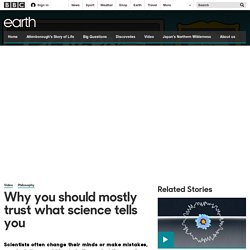 Culture - The world’s quirkiest phrases. This phrase is used when you want to say that something isn't your problem, so you're indifferent to it. 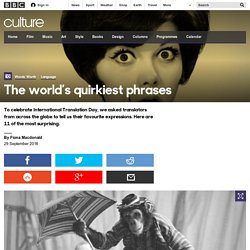 I have used it in my translations before without making any substitute for the literal meaning, because everyone understands the point, and the phrase is so funny. Antonia Lloyd-Jones, co-chair of the Translators Association, Society of Authors This is a French expression I love that’s used to describe a smooth wine. Ros Schwartz, Society of Authors I tend to translate this into English as ‘So and so is a subject matter expert’. Mohammed Yahya Abu-Risha, Vice-President for Education and Training, Arab Professional Translators Society. Ig Nobel win for Alpine 'goat man' Image copyright TIM BOWDITCH A British man who lived in the Alps as a goat for three days has won one of this year's Ig Nobel prizes. 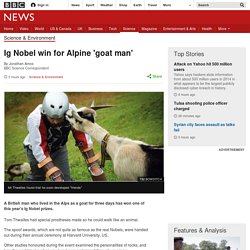 Tom Thwaites had special prostheses made so he could walk like an animal. The spoof awards, which are not quite as famous as the real Nobels, were handed out during their annual ceremony at Harvard University, US. Other studies honoured during the event examined the personalities of rocks, and how the world looks when you bend over and view it through your legs.

On the surface, all the celebrated research sounds a bit daft, but a lot of it - when examined closely - is actually intended to tackle real-world problems. And nearly all of the science gets published in peer-reviewed, scholarly journals. This Battery Has Lasted Over 175 Years And No One Knows What It Is Made Of. Capital - The secret to stopping your ‘ummms’ Can you solve it? Are you smarter than Jo Nesbø? Strangers often ask me to challenge them with mathematical brainteasers. 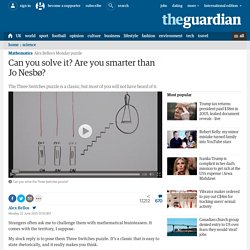 It comes with the territory, I suppose. My stock reply is to pose them Three Switches puzzle. It’s a classic that is easy to state rhetorically, and it really makes you think. I’ve challenged many people over the years, but only one person has solved it right there in front of me. Jo Nesbø, the Norwegian crime writer, who I once met at a literary festival in Glasgow. Altering the DNA of humans - should we allow gene editing? 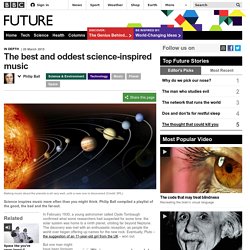 Philip Ball compiled a playlist of the good, the bad and the far-out. In February 1930, a young astronomer called Clyde Tombaugh confirmed what some researchers had suspected for some time: the solar system was home to a ninth planet, orbiting far beyond Neptune. The discovery was met with an enthusiastic reception, as people the world over began offering up names for the new rock. Eventually, Pluto – the suggestion of an 11-year-old girl from the UK – won out.

This group should have written Star Wars — Which band was Mark Bolan praising? But one man might have been forgiven for not welcoming the discovery. British composer Colin Matthews was asked by the Halle Orchestra to write an addendum for the planet Pluto. The tale of Holst and Matthews might be seen as a warning for any artist or musician tempted to explore science through their work. But not all scientifically inspired music is based on principles that endure. Glam science.