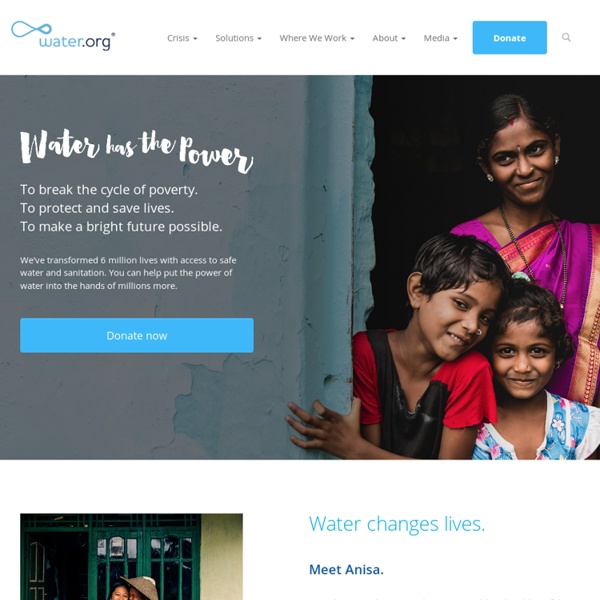 Water, Sanitation and Hygiene According to the latest estimates of the WHO/UNICEF Joint Monitoring Programme for Water Supply and Sanitation (JMP), 32 per cent of the world’s population – 2.4 billion people – lacked improved sanitation facilities, and 663 million people still used unimproved drinking water sources in 2015 Inadequate access to safe water and sanitation services, coupled with poor hygiene practices, kills and sickens thousands of children every day, and leads to impoverishment and diminished opportunities for thousands more. Poor sanitation, water and hygiene have many other serious repercussions. Children – and particularly girls – are denied their right to education because their schools lack private and decent sanitation facilities. Women are forced to spend large parts of their day fetching water.

Climate Leaders Learn How to Measure and Lower GHG Emissions Throughout an Organization's Supply Chain » EPA's Center for Corporate Climate Leadership serves as a resource center for all organizations looking to expand their work in the area of greenhouse gas (GHG) measurement and management. The Center was launched in 2012 to establish norms of climate leadership by encouraging organizations with emerging climate objectives to identify and achieve cost-effective GHG emission reductions, while helping more advanced organizations drive innovations in reducing their greenhouse gas impacts in their supply chains and beyond. The Center also recognizes exemplary corporate, organizational, and individual leadership in addressing climate change by co-sponsoring The Climate Leadership Awards with the Association of Climate Change Officers, the Center for Climate and Energy Solutions, and The Climate Registry, and serving as the Climate Leadership Conference headline sponsor.

Wall of Silence - Women's Aid This November Avon UK and GLAMOUR magazine teamed up to launch the Wall Of Silence, a campaign created by GLAMOUR reader Charli Bailey who took up the magazine's challenge to its readers to create a campaign for Women's Aid and Refuge. The Wall Of Silence is made up of real people who have posted "shhh" selfies tagged #wallofsilence on Instagram, Twitter, Facebook or uploaded them directly to the site. It has also been supported by some of Women's Aid's celebrity supporters, including Ambassadors Jahmene Douglas and Charlie Webster (below). "As a survivor myself, I know how hard it is to open up," says creator Charli.

Lists of environmental topics The natural environment, commonly referred to simply as the environment, is all living and non-living things that occur naturally on Earth or some part of it (e.g. the natural environment in a country). This includes complete ecological units that function as natural systems without massive human intervention, including all vegetation, animals, microorganisms, rocks, atmosphere and natural phenomena that occur within their boundaries. And it includes universal natural resources and physical phenomena that lack clear-cut boundaries, such as air, water, and climate, as well as energy, radiation, electric charge, and magnetism, not originating from human activity. General lists[edit] Lists of countries[edit] Celebrate Toilet Day No invention has saved more lives than a toilet. More than 80% of sewage in developing countries is discharged untreated, polluting rivers, lakes and coastal areas. All because there is no infrastructure - a toilet, or city utilities - to flush away yesterday's meal. But that's not all. Toilets bring dignity, privacy, safety and health.

Water Wise - Water Conservation and Education Campaign by Rand Water "Water Wise" is Rand Water's environmental brand. It is a campaign aimed at increasing awareness of the need to value water and to use it wisely. South Africa is a water stressed country, and the water resources are under tremendous pressure from a growing population, ongoing development, pollution, wetland destruction, alien invasive plants and the effects of global warming. The amount of water available for use remains the same, and despite plans to increase storage capacity through the building of new dams or water transfer schemes, predictions are that the demand for water will outstrip supply by 2025. The only answer to this dilemma lies in changing people's attitude and thus their behaviour to use water more wisely, and in this regard Rand Water’s “Water Wise” campaign is visionary.

Click To Give @ The Rainforest Site Hokey Smoke, A Flying Squirrel! The amazing flying squirrel doesn't need wings to soar. This aerodynamic rodent has flexible membranes connecting its front and hind legs that let it glide through the air with ease. 5 Ways Toilets Change the World The loo, the W.C., the lavatory, the privy, the porcelain god -- while it goes by many names, the toilet -- one of life's most mundane objects -- plays a fundamental role in society. Yet more than a third of the world's population lacks access to even a basic pit latrine, and the problem may get worse. A recent statistical analysis predicts the world population will hit 11 billion by 2100. From preventing illness to fostering education, here are five ways toilets change the world:

Water, sanitation & hygiene Women and girls from remote mountain villages in North Vietnam walk up to three hours a day to haul water back to their houses for cooking. Here in Australia we turn on our taps. Fresh, clean accessible water for drinking and for cooking. We all need it, only some of us have to go to the limits of human endurance to get it. Screening Green Businesses Certification for Green Businesses Green America certifies businesses that are committed to using business as a platform for social change. Since 1982, Green America has evaluated over 8,000 small businesses.

Learning to Give - Teachers Moments of Service Lesson Plans Themed teaching resources to support calendar events. Includes lesson plans, toolkits, project ideas, and more. Human Waste Used by 200 Million Farmers, Study Says August 21, 2008 Facing water shortages and escalating fertilizer costs, farmers in developing countries are using raw sewage to irrigate and fertilize nearly 49 million acres (20 million hectares) of cropland, according to a new report—and it may not be a bad thing. While the practice carries serious health risks for many, those dangers are eclipsed by the social and economic gains for poor urban farmers and consumers who need affordable food, the study authors say. Nearly 200 million farmers in China , India , Vietnam , sub-Saharan Africa, and Latin America harvest grains and vegetables from fields that use untreated human waste. Ten percent of the world's population relies on such foods, according to the World Health Organization (WHO).

Food and Agriculture Organization of the United Nations FAO's role in water Agriculture faces complex challenges between now and 2050 to satisfy an estimated population of nine billion. One certainty, however, is that more water will be needed to produce the estimated 60% of extra food needed. FAO’s work in water focuses on a more efficient, equitable and environmentally friendly use of water in agriculture.