WWF Footprint Calculator. The World In 2050 [The Real Future Of Earth] - Full BBC Documentary 2017. Future - Chocolate vs vegetables: The true environmental costs. As humankind faces the threat of global warming, we are becoming increasingly aware that our every indulgence will leave its mark on the environment. 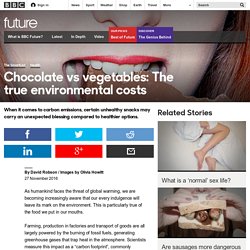 This is particularly true of the food we put in our mouths. Farming, production in factories and transport of goods are all largely powered by the burning of fossil fuels, generating greenhouse gases that trap heat in the atmosphere. Scientists measure this impact as a “carbon footprint”, commonly expressed as the volume of carbon dioxide produced per 100g serving of food. With this, it is possible to create a food pyramid based on the harm each snack and delicacy inflicts on the environment. Meat and dairy products lie at the bottom, wreaking the greatest damage, while fruit and vegetables are the most environmentally friendly at the top. This approach, however, doesn’t consider how much energy our bodies get from those foods. Viewed in this way, the pyramid turns upside down. Bread Cakes Chocolate Eggs Milk Meat Tinned vegetables. We asked 86 burglars how they broke into homes. Burglary Investigation: Part 2 Share Video Burglary Investigation: Part 2 None App users: Tap to view By Kyle Iboshi, KGW News, Portland, Ore. 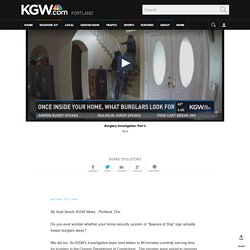 Do you ever wonder whether your home security system or “Beware of Dog” sign actually keeps burglars away? We did too. What we learned could help you keep your home safe from burglaries. Below is a summary of the answers we received. 1. Most inmates broke in through an unlocked door or window. “I would kick in the door rather than break glass. 2. Jewelry, electronics, cash and credit cards are all attractive to burglars. “NRA sticker on car bumper = Lots of guns to steal,” wrote one burglar. Is Eating Bugs Healthier Than Eating Meat? A global protein shortage is prophesied for the coming decades, but bugs are flying in to the rescue. 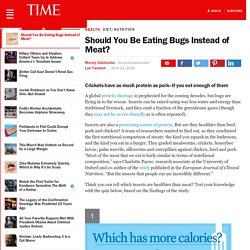 Insects can be raised using way less water and energy than traditional livestock, and they emit a fraction of the greenhouse gases (though they may not be as eco-friendly as is often repeated). Insects are also a promising source of protein. But are they healthier than beef, pork and chicken? A team of researchers wanted to find out, so they conducted the first nutritional comparison of meats: the kind you squash in the bathroom, and the kind you eat in a burger. They graded mealworms, crickets, honeybee larvae, palm weevils, silkworms and caterpillars against chicken, beef and pork. Think you can tell which insects are healthier than meat? Global Warming Facts, Global Warming Information, Global Warming Questions, Quiz. Eco-friendly Bristol 'poo bus' powered by human waste. Learning English - Crossword - Weather idioms.

How pickpockets trick your mind. Our 12 days of Christmas rundown of the top stories of the year continues with #11: Pickpockets use much more than sleight of hand, says Caroline Williams, they hack your brain’s weaknesses. 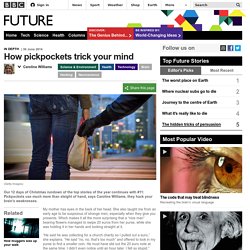 My mother has eyes in the back of her head. She also taught me from an early age to be suspicious of strange men, especially when they give you presents. Which makes it all the more surprising that a “nice man” bearing flowers managed to swipe 20 euros from her purse, while she was holding it in her hands and looking straight at it. “He said he was collecting for a church charity so I pulled out a euro,” she explains. “He said “no, no, that’s too much” and offered to look in my purse to find a smaller coin. But she needn’t feel bad. The most important of these loopholes is the fact that our brains are not set up to multi-task. So while sleight of hand helps, it’s as much about capturing all of somebody’s attention with other movements. Other tactics are more psychological. Dirty tricks. Global Warming 101.pdf. Global Warming 101.