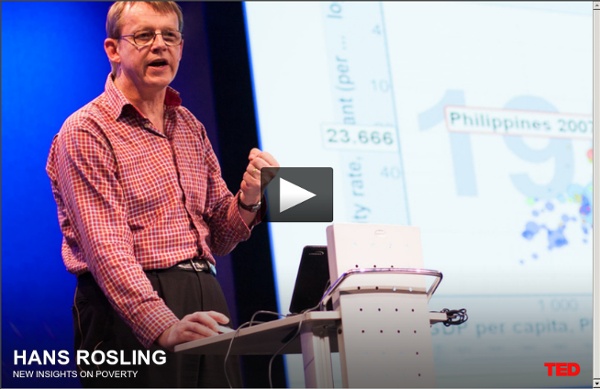 GOP antics may lead to a 'de-Americanized world' When there’s a global economic crisis, investors from around the world have spent the last several generations doing one thing: they buy U.S. treasuries. The reasoning, of course, is that there is no safer investment, anywhere on the planet, than the United States of America – which has the strongest and largest economy on the planet, and which always pays its bills. All of these assumptions, of course, were cultivated over generations, and pre-date the radicalization of the Republican Party.

5 Best Data Visualization Projects of the Year – 2009 It was a huge year for data. There's no denying it. Data is about to explode. Applications sprung up left and right that help you understand your data - your Web traffic, your finances, and your life. There are now online marketplaces that sell data as files or via API. Data.gov launched to provide the public with usable, machine-readable data on a national scale. Don’t Panic — End Poverty Hans Rosling asks: Has the UN gone mad? The United Nations just announced their boldest goal ever: To eradicate extreme poverty for all people everywhere, already by 2030. Looking at the realities of extremely poor people the goal seems impossible. The rains didn’t fall in Malawi this year. The poor farmers Dunstar & Jenet, gather a tiny maize harvest in a small pile on the ground outside their mud hut.

German Growth Led by Domestic Demand as Investment Climbs German economic growth was driven exclusively by domestic demand in the third quarter as investment and construction offset an export slowdown. Capital investment rose 1.6 percent in the three months through September from the prior quarter and construction increased 2.4 percent, the Federal Statistics Office in Wiesbaden said today. The expansion in gross domestic product slowed to 0.3 percent from 0.7 percent, it said, confirming a Nov. 14 estimate. Germany is relying more on its domestic economy as the euro area, its biggest export destination, struggles to sustain a nascent recovery. Growth in the 17-nation currency bloc almost stalled in the third quarter, as the French economy unexpectedly shrank and Italy extended a record-long recession. “The investment surge was much stronger than we and consensus had expected and bodes well for an investment-led expansion next year as well,” said Christian Schulz, senior economist at Berenberg in London.

Decode Exhibition Points Way to Data-Driven Art The cryptic works on display at London’s Decode: Digital Design Sensations exhibition manipulate raw data as a kind of virtual pigment, finding form and fun amid the sensory overload that threatens to overwhelm the 21st-century hive mind. Several exhibition pieces showcased at Victoria and Albert Museum depend on human presence to produce their full effect. A motion-detecting eyeball, for examples, blinks each time a visitor blinks. In another piece, a video screen enables visitors to “paint” smears of color through the power of their gyrations. Let’s Kill The Aid Industry Long have I nursed a healthy contempt for the aid industry. As I spent much of a decade wandering around the planet, taking local public transit through poor and/or unstable nations1, I kept encountering aid workers in their flashy white branded 4x4s, and was almost invariably resoundingly unimpressed. As I’ve written elsewhere:

MindMapping: Mind Maps, PDF Management and Reference Management Are you using mind mapping tools such as MindManager, FreeMind or XMind? And reference management tools such as JabRef, Endnote, or Zotero? And do you sometimes even create bookmark in PDFs? Then you should have a look at SciPlore MindMapping. We Can't Escape Our 'Groundhog Day' Recovery - Matthew O'Brien Every day, we wake up hoping that the economy has finally picked up. And every day, we wake up to hear Sonny and Cher playing find out that it hasn't. Columbia Pictures I'm never going to forgive Punxsutawney Phil for the last six weeks of wintry weather, but the economy will. The past five years have been a Groundhog Day recovery. Every day, we wake up hoping that this will be the day that the economy finally picks up.