Don't Drink it Though 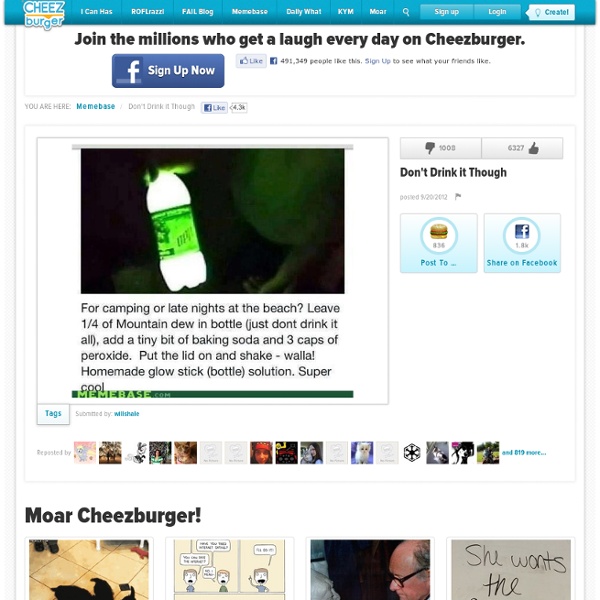 Most Upvoted 492 votes This Snowman is Straight out of Calvin and Hobbes 477 votes Nice Work, Dad 442 votes

How Islam will dominate the world « Allah (swt) says in the Qur’aan: “It is he (Allah) who has sent his Messenger (saw) with guidance and the religion of truth, in order for it to be dominant over all other religions, even though the Mushrikoon (disbelievers) hate it.” (EMQ at-Tawbah, 9: 33) And the messenger Muhammad (saw) said: “Verily Allah has shown me the eastern and western part of the earth, and I saw the authority of my Ummah (nation) dominate all that I saw.” (Saheeh Muslim, hadeeth #2889) The 10 Most Adorable Unusual Animal Friendships Ah, interspecies animal love – it’s something we simply adore at the PBH Network. So we did a little research and found the 10 most adorable unusual animal friendships for your viewing pleasure: 10. A Chimpanzee Adopts An Orphaned Puma Cub At the The Institute of Greatly Endangered and Rare Species in South Carolina, 5 year old chimpanzee Anjana took up the task of helping to hand-raise an orphaned cub named Sierra. The results were expectedly adorable!

Hyperforeignism A hyperforeignism is a non-standard language form resulting from an unsuccessful attempt to apply the rules of a foreign language to a loan word (for example, the application of the rules of one language to a word borrowed from another) or, occasionally, a word believed to be a loan word. The result reflects "neither the... rules of English nor those of the language from which the word in question comes."[1] For example, "habanero" is sometimes spelled or pronounced with an ñ (habañero), which is not the correct Spanish form from which the English word was borrowed.[2] In an extreme form, this can also apply to words that have a foreign origin but have since been assimilated to follow the general rules or even words that are not foreign at all but are misperceived as foreign. English[edit]

Several ways to tie shoes. Oh Cleverbot... is there anything you don't know? If Dexter were a Dr. Seuss character. How my mouth tastes after flossing. When you wish upon a star. Atomic orbital The shapes of the first five atomic orbitals: 1s, 2s, 2px, 2py, and 2pz. The colors show the wave function phase. These are graphs of ψ(x, y, z) functions which depend on the coordinates of one electron. To see the elongated shape of ψ(x, y, z)2 functions that show probability density more directly, see the graphs of d-orbitals below. Each orbital in an atom is characterized by a unique set of values of the three quantum numbers n, ℓ, and m, which correspond to the electron's energy, angular momentum, and an angular momentum vector component, respectively.

The gentleman's guide to amputation. The five stages of incessant pop music. Text me when you get home. How I feel standing vs sitting. Nothing racist going on here. The Man Card. Hologram technology. There is a lot of food in this house... We can't eat a whole pie! It's an amazing age we live in... Rushden Research Group: Shoemaking - Sole Attaching Channelling and Opening Soles are channelled to enable stitches to sink below the surface to prevent the tops of the stitches from being worn off, to make a clean bottom and to give an appearance of lightness to the bottom. It is not always necessary to channel soles. They may be stitched aloft or in groove, which add character to the bottom.

List of Top Gear episodes Episodes are listed in order of their original U.K. air date along with featured cars, challenges, and guests. For more information on features and challenges included in each series, visit each series' respective page. Comprehensive lists of challenges and races can be found at Top Gear challenges and Top Gear Races.