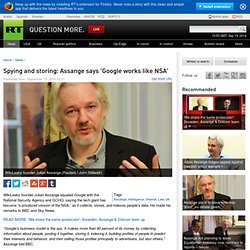 (Reuters / John Stillwell/) WikiLeaks founder Julian Assange equated Google with the National Security Agency and GCHQ, saying the tech giant has become “a privatized version of the NSA,” as it collects, stores, and indexes people’s data. He made his remarks to BBC and Sky News. READ MORE: 'We share the same prosecutor': Snowden, Assange & Dotcom team up “Google’s business model is the spy. “So the result is that Google, in terms of how it works, its actual practice, is almost identical to the National Security Agency or GCHQ,” the whistleblower argued. ‘Google deeply involved in US foreign policy’ Google has been working with the NSA “in terms of contracts since at least 2002,” Assange told Sky News.

“They are formally listed as part of the defense industrial base since 2009. Google has tricked people into believing that it is “a playful, humane organization” and not a “big, bad US corporation,” Assange told BBC. Assange stakeout has cost nearly $12 million. Published time: August 06, 2014 03:54 Julian Assange (Reuters / Andrew Winning) As WikiLeaks founder Julian Assange marks his 777th day in the Ecuadorian embassy in London, the Metropolitan Police has spent over $11.8 million on guarding the embassy. 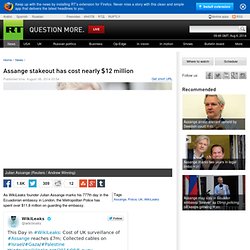 This Day in #WikiLeaks: Cost of UK surveillance of #Assange reaches £7m; Collected cables on #Israel/#Gaza/# — WikiLeaks (@wikileaks) August 6, 2014 Assange has been detained without charge for 1,337 days – and 777 of those days have been spent in the Ecuadorian embassy in London, according to the latest WikiLeaks statement. Meanwhile, the price tag for guarding Assange hit over seven million British pounds (US$11.8 million) early on Wednesday, according to govwaste.co.uk counter. Officers have been staking out the embassy around the clock since June 2012, with the cost to the London taxpayers surpassing $15,000 per day. 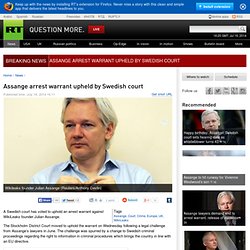 The Stockholm District Court moved to uphold the warrant on Wednesday following a legal challenge from Assange’s lawyers in June. The challenge was spurred by a change to Swedish criminal proceedings regarding the right to information in criminal procedures which brings the country in line with an EU directive. Assange to hit runway for Vivienne Westwood’s son. Published time: June 27, 2014 23:29 WikiLeaks founder Julian Assange (AFP Photo / Carl Court) Julian Assange has been asked to be a guest model at London Fashion Week in September. 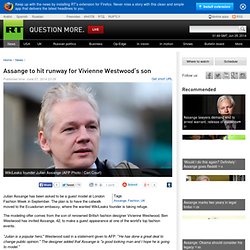 The plan is to have the catwalk moved to the Ecuadorian embassy, where the wanted WikiLeaks founder is taking refuge. The modeling offer comes from the son of renowned British fashion designer Vivienne Westwood. Ben Westwood has invited Assange, 42, to make a guest appearance at one of the world's top fashion events. "Julian is a popular hero," Westwood said in a statement given to AFP. According to Westwood's PR spokesman, the show is inspired by Clint Eastwood's costumes in spaghetti western films. Assange may stay in Ecuador embassy 'forever' as £6mn policing bill keeps growing. 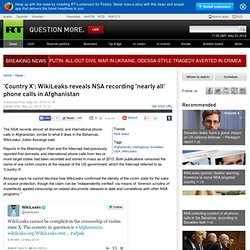 Reports in the Washington Post and the Intercept had previously reported that domestic and international phone calls from two or more target states had been recorded and stored in mass as of 2013. Both publications censored the name of one victim country at the request of the US government, which the Intercept referred to as 'Country X'. Assange says he cannot disclose how WikiLeaks confirmed the identity of the victim state for the sake of source protection, though the claim can be “independently verified” via means of “forensic scrutiny of imperfectly applied censorship on related documents released to date and correlations with other NSA programs.”

The collection of phone conversation audio is not limited to the Bahamas and Afghanistan. WikiLeaks ignores ‘deaths’ warning, threatens to name NSA-targeted country. Julian Assange on Civil Courage, Ethics, Ukraine, Internet, NSA. Quotes from his direct sending at SXSW. Click on image below to watch the video with the full interview Transcripts below based in the direct sending, synthesized in twits by @wikileaks (and @treisoroon, @avilarenata, @professorsblogg) 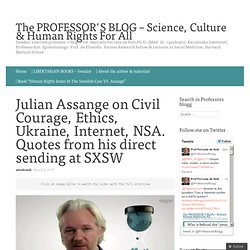 Assange: NSA, GCHQ’s ability to surveil everyone on planet ‘almost here’ 'This Week' Transcript: WikiLeaks' Julian Assange. A rush transcript of "This Week with George Stephanopoulos" airing on Sunday morning, June 30, 2013 on ABC News is below. 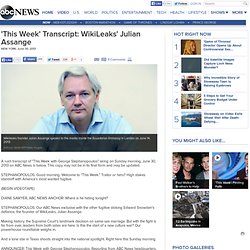 This copy may not be in its final form and may be updated. STEPHANOPOULOS: Good morning. Welcome to "This Week. " Traitor or hero? High stakes standoff with America's most wanted fugitive. DIANE SAWYER, ABC NEWS ANCHOR: Where is he hiding tonight? STEPHANOPOULOS: Our ABC News exclusive with the other fugitive stoking Edward Snowden's defiance, the founder of WikiLeaks, Julian Assange. Making history: the Supreme Court's landmark decision on same-sex marriage. And a lone star in Texas shoots straight into the national spotlight. ANNOUNCER: This Week with George Stephanopoulos. STEPHANOPOULOS: So much to get to in one of the newsiest weeks of the year. BYRON PITTS, ABC NEWS CORRESPONDENT: Good morning, George. Moving is right. Later in Cape Town, he meets with Bishop Desmond Tutu to shine a light on AIDS awareness here. STEPHANOPOULOS: Thanks, Byron. Good morning, Pierre. Pentagon prisons revealed: WikiLeaks publishes terror detainee manuals.

Assange embassy gamble follows famous precedents. By Richard Allen Greene, CNN updated 8:20 PM EDT, Sun August 19, 2012 A document that says that WikiLeaks founder Julian Assange is to be arrested in any circumstances if he comes out of the Embassy of Ecuador is seen on a police officer's clipboard. 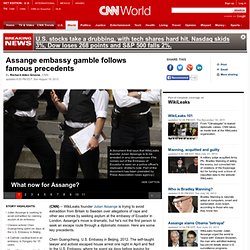