Book of da Week: Graffiti Brasil by Tristan Manco. A touch of vandalism (sorry, graffiti) this week in the form of an art book we bought in London back in 2006. 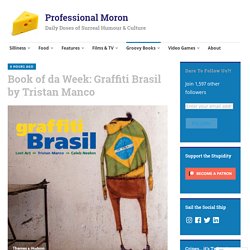 It was a present for sister Wapojif. We trust she still has the copy! An art book is for life, not just Christmas. Playful Illustrative Characters Span Brightly Painted Walls by Joachim. The Sultans Elephant in London (Longer Version) A Collaboratively Painted ‘Mural of Brotherhood’ Stretches for Over a Mile on Mexico’s Border. Field Station Berlin Teufelsberg: NSA spy station on buried Nazi college. Filed 26/6/2009 | Updated 9/9/2015 A Cold War relic lies abandoned on top of a mountain made of rubble, built over a Nazi college that couldn't be destroyed after World War II. 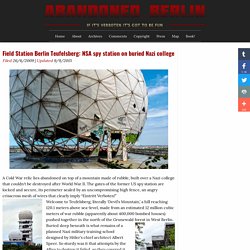 The gates of the former US spy station are locked and secure, its perimeter sealed by an uncompromising high fence, an angry crisscross mesh of wires that clearly imply “Eintritt Verboten!” Welcome to Teufelsberg, literally ‘Devil's Mountain,’ a hill reaching 120.1 meters above sea-level, made from an estimated 12 million cubic meters of war rubble (apparently about 400,000 bombed houses) pushed together in the north of the Grunewald forest in West Berlin.

Banksy Painting Spontaneously Shreds Itself Moments After Selling for $1.4 Million at Sotheby’s. Soviet war memorials in Eastern Europe continue to strain relations with Russia. Decades after the fall of the communist regimes in Eastern Europe, Soviet World War II monuments continue to arouse significant controversy in many former Eastern Bloc countries where they are either being dismantled by law or vandalised by activists. 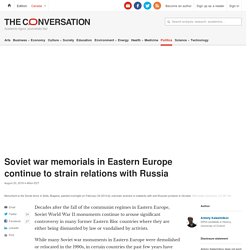 While many Soviet war monuments in Eastern Europe were demolished or relocated in the 1990s, in certain countries the past few years have seen a spike in these activities. The Ukrainian “decommunisation law” which passed on April 9, 2015 opened the way for the removal of public art bearing communist symbolism. While war monuments were officially exempt, the political climate has encouraged sporadic destruction and vandalism (particularly in the western regions of Ukraine – Lviv’s Memorial of Glory to Heroes Fallen in World War II, for instance, was vandalised less than two months ago). In Poland, the process of dismantling Soviet war monuments was accelerated by an amended “decommunisation” law, which came into force in October 2017. Pref. Peeta. GREY AREA. Dublin’s Sweep of Public Mural Removals Prompts Wave of New Artworks. Banksy Emerges in New York and Calls Attention to Imprisoned Turkish Artist Zehra Doğan. Banksy Unofficially Collaborates With Basquiat Outside the Barbican.

How 21 artists graffitied one man’s property, made it famous, sued him when he knocked it down and won $6.7m. It’s an extraordinary tale with a whiff of Banksy about it, although surprisingly, he was not involved. 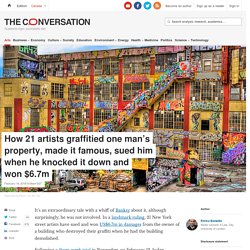 In a landmark ruling, 21 New York street artists have sued and won US$6.7m in damages from the owner of a building who destroyed their graffiti when he had the building demolished. Following a three-week trial in November, on February 12, Judge Frederic Block ruled against Jerry Wolkoff, owner of the 5Pointz complex in Queens, conferring the biggest award of $1.3m on the building’s mastermind-curator, graffiti artist Meres One, real name Jonathan Cohen.

The demolition of the former factory site turned graffiti mecca began in August 2014. The year before, artists had tried to oppose the warehouse’s destruction, but an attempt to win an injunction to prevent the owner from knocking it down was unsuccessful. In the 1990s, Wolkoff had agreed to allow the derelict factory to be used as a showcase for local graffiti talent. Amok Island Paints Modern Minimalist Murals of Native Flora and Fauna. Mona Caron (@mona.caron) Mantra (@mantrarea) Bordalo II Opens the Doors to ‘Attero,’ a Giant Exhibition of Animal Assemblages Built with Trash. Street Artists Biographies/blu. JR - Artist. Jonesy Street Art in London, the Artist Who is Our Little Secret. One of the most elusive and mysterious street artists around in London at the moment is surely the artist known only as Jonesy. 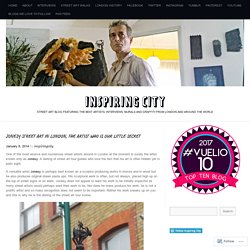 A darling of street art tour guides who love the fact that his art is often hidden yet in plain sight. A versatile artist Jonesy is perhaps best known as a sculptor producing works in bronze and in wood but he also produces original drawn paste ups. His sculptural work is often, but not always, placed high up on the top of street signs or on walls. Jonesy does not appear to want his work to be initially impactful as many street artists would perhaps want their work to be.

Nor does he mass produce his work, he is not a prolific artist and so mass recognition does not seem to be important. CTRL+X: Street Artists “Delete” Graffiti with a Painted Anamorphic Illusion. As part of the Stenograffia street art and graffiti festival in Russia, a collaborative of artists worked to create this phenomenal illusion that appears to “erase” a collection of graffiti from a small car and trash dumpster. 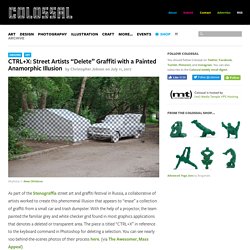 With the help of a projector, the team painted the familiar grey and white checker grid found in most graphics applications that denotes a deleted or transparent area. The piece is titled “CTRL+X” in reference to the keyboard command in Photoshop for deleting a selection. You can see nearly 100 behind-the-scenes photos of their process here. (via The Awesomer, Mass Appeal) Стенограффия - STREET ART AND GRAFITI FESTIVAL. A Crumbling Building in Greenpoint Now Features a Ghoulish Skull by Suitswon. Artist Shows That Putting Googly Eyes on Inanimate Objects Never Gets Old. Ah yes, eyebombing, the street art equivalent of drawing a funny mustache on Mona Lisa. 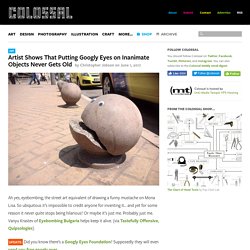 So ubiquitous it’s impossible to credit anyone for inventing it… and yet for some reason it never quite stops being hilarious? Or maybe it’s just me. Probably just me. Vanyu Krastev of Eyebombing Bulgaria helps keep it alive. Painted Shadows in an Abandoned Psychiatric Hospital. 1000 Shadows is an ongoing project by Brazilian street artist Herbert Baglione that features eerie shadows taking residence in abandoned buildings. 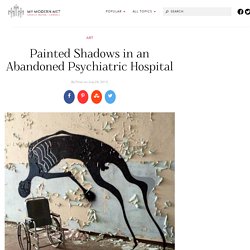 The painted silhouettes have emerged on the walls, floors, and ceilings of empty rooms and outside deserted homes in So Paulo and Paris. Perhaps the most interesting locale that Baglione has chosen for the elongated shadows, though, is an abandoned psychiatric hospital in Parma, Italy. As if the vacant, crumbling edifice with a history of housing mental illness didn't provide enough emotional context, Baglione adds his ghostly figures to the dilapidated decor.

Although his flower is the only image he repeats in his street art, Michael has created a variety of other works in the streets. De Feo's current studio work reflects his ongoing interest in Dutch 17th century flower still life painting and Vanitas painting. Michael's studio paintings frequently incorporate geographical maps as a metaphor for painting the entire globe. Michael's work has appeared in countless media outlets, including three covers of New York Magazine's "Reasons to Love New York" issues, The New York Times, The London Sunday Times and TIME Magazine. 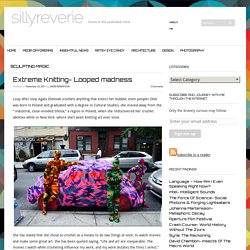 Olek was born in Poland and graduated with a degree in Cultural Studies, she moved away from the ” industrial, close-minded Silesia,” a region in Poland, when she rediscovered her crochet abilities while in New York- where she’s been knitting art ever since. She has stated that she chose to crochet as a means to do two things at once: to watch movies and make some great art. She has been quoted saying, “Life and art are inseparable.

The movies I watch while crocheting influence my work, and my work dictates the films I select.” I’d do the same to keep myself interested for the many hours of knitting to be done. Knit the City: your friendly neighbourhood graffiti knitting art collective. Crop circles found in the snow. Forget Crop Circles, Here Come Snow Circles! WELCOME TO THE CROP CIRCLE CONNECTOR. Jean-Michel Basquiat. Keith Haring. Banksy – Jerusalem Wall « hardcore as something more beautiful. Old man: „You paint the wall, you make it look beautiful.“ Me:“Thanks.“ Old man:“We don‘t want it to be beautiful, we hate this wall, go home! “ Nazir Tanbouli Contemporary Art - Drawing, Mural and Installation.

How to be a Guerilla Artist. June 8th, 2010 How to be a Guerilla Artist (originally published in 2006) Guerilla art is a fun and insidious way of sharing your vision with the world. It is a method of art making which entails leaving anonymous art pieces in public places. It can be done for a variety of reasons, to make a statement, to share your ideas, to send out good karma, or just for fun. AOC. Street Art News. Great Street Art : Vol 22. More Great Street Art : 22 Here’s the latest collection of great street art from some of the world’s best urban artists.

Collecting incredible work from street artists such as Faith47, Zilda, ROA, Banksy, Axel Void and many more. See more amazing urban art & great street art in Mr Pilgrim’s street art blog or catch up with the very latest urban art posts on Mr Pilgrim’s street art page. Above the Influence Sao Paulo, Brazil by Sliks. El Mac // Great Urban Artists // Street Art Online // Mr Pilgrim. El Mac // Great Urban Artists When you are looking at more classically inspired urban artists there aren’t many with the mind blowing skills to actually pull it off. Of course there are some and one you will undoubtedly come across is El Mac. 20 awesome examples of street art.