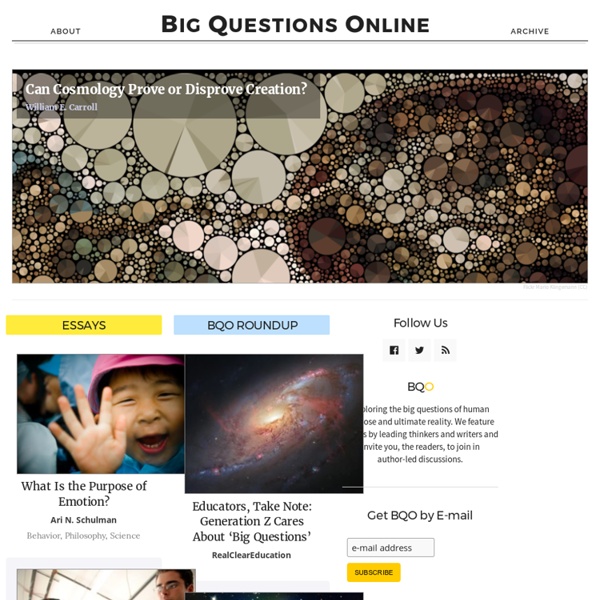 Metacognition: The Gift That Keeps Giving Editor's note: This post is co-authored by Marcus Conyers who, with Donna Wilson, is co-developer of the M.S. and Ed.S. Brain-Based Teaching degree programs at Nova Southeastern University. They have written several books, including Five Big Ideas for Effective Teaching: Connecting Mind, Brain, and Education Research to Classroom Practice. Students who succeed academically often rely on being able to think effectively and independently in order to take charge of their learning. These students have mastered fundamental but crucial skills such as keeping their workspace organized, completing tasks on schedule, making a plan for learning, monitoring their learning path, and recognizing when it might be useful to change course.

We're Underestimating the Risk of Human Extinction Unthinkable as it may be, humanity, every last person, could someday be wiped from the face of the Earth. We have learned to worry about asteroids and supervolcanoes, but the more-likely scenario, according to Nick Bostrom, a professor of philosophy at Oxford, is that we humans will destroy ourselves. Bostrom, who directs Oxford's Future of Humanity Institute, has argued over the course of several papers that human extinction risks are poorly understood and, worse still, severely underestimated by society.

Analysis predicts extremely disruptive, total transition to EV / autonomous vehicles in 13 years (Tech Xplore)—RethinkX, an independent think tank that analyzes and forecasts disruptive technologies, has released an astonishing report predicting a far more rapid transition to EV/autonomous vehicles than experts are currently predicting. The report is based on an analysis of the so-called technology-adoption S-curve that describes the rapid uptake of truly disruptive technologies like smartphones and the internet. Additionally, the report addresses in detail the massive economic implications of this prediction across various sectors, including energy, transportation and manufacturing. Rethinking Transportation 2020-2030 suggests that within 10 years of regulatory approval, by 2030, 95 percent of U.S. passenger miles traveled will be served by on-demand autonomous electric vehicles (AEVs). "Our analysis indicates that 2021 is the most likely date for the disruption point," the report reads. The energy sector

GOD AND NATURE Before he even opened his mouth, most of the 1,600 people in the audience were on their feet. Hands flew together and a chorus of shouts and whoops filled the large Richmond, Kentucky, auditorium, which had reached capacity well before that warm October night’s Chautauqua lecture was scheduled to start. In three separate viewing rooms in buildings just steps away from the assembly hall at Eastern Kentucky University’s Brock Auditorium, video screens had been erected to simulcast the event to the 600+ disappointed fans turned away at the door. Who was responsible for this adoring, zealous support in a small college town in rural Kentucky? Whose most recent book did this throng of mostly young adults clutch in their hands, hoping to see his autograph scrawled upon its title page? A great British evolutionary biologist—a man hailed for his skill at communicating science to the masses—Richard Dawkins.

Voltaire French writer, historian and philosopher François-Marie Arouet (French: [fʁɑ̃swa maʁi aʁwɛ]; 21 November 1694 – 30 May 1778), known by his nom de plume Voltaire (;[5][6][7] also ,[8][9] French: [vɔltɛːʁ]), was a French Enlightenment writer, historian, and philosopher famous for his wit, his criticism of Christianity—especially the Roman Catholic Church—as well as his advocacy of freedom of speech, freedom of religion, and separation of church and state. Biography François-Marie Arouet was born in Paris, the youngest of the five children of François Arouet (1649–1722), a lawyer who was a minor treasury official, and his wife, Marie Marguerite Daumard (c. 1660–1701), whose family was on the lowest rank of the French nobility. Some speculation surrounds Voltaire's date of birth, because he claimed he was born on 20 February 1694 as the illegitimate son of a nobleman, Guérin de Rochebrune or Roquebrune. He mainly argued for religious tolerance and freedom of thought.

The Problem with the Data-Information-Knowledge-Wisdom Hierarchy - David Weinberger by David Weinberger | 9:00 AM February 2, 2010 The data-information-knowledge-wisdom hierarchy seemed like a really great idea when it was first proposed. But its rapid acceptance was in fact a sign of how worried we were about the real value of the information systems we had built at such great expense. What looks like a logical progression is actually a desperate cry for help. The DIKW hierarchy (as it came to be known) was brought to prominence by Russell Ackoff in his address accepting the presidency of the International Society for General Systems Research in 1989.

Science and Nonduality In this article standup philosopher Tim Freke articulates the nature of ‘paralogical’ thinking, which is the foundation of the philosophy and practices he shares to guide people to a ‘deep awake’ state. The need for paralogical thinking arises from an important insight. Life is profoundly paradoxical. I’ve already mentioned in passing the paradox that on the surface of life we live in a world of separate things, but at the depths all is one.

MACH: The best and latest in Tech & Innovation Dominic Hogdson / Sentinel-2/ESA Environment Iceberg's break from Antarctic ice shelf is 'geologically imminent' Atheism with Positivity Alberta Officials Reject Proposed Catholic Sex Ed Lessons That “Deny Science” Alberta officials deserve praise for this strong stance against harmful misinformation. Read more Gordon Klingenschmitt: “The Church Should Take Over the Government” Gordon Klingenschmitt, the former Colorado State Rep. who eventually lost his seat in part because of his theocratic fantasies, is at it again.