Do we live in a computer simulation? UW researchers say idea can be tested 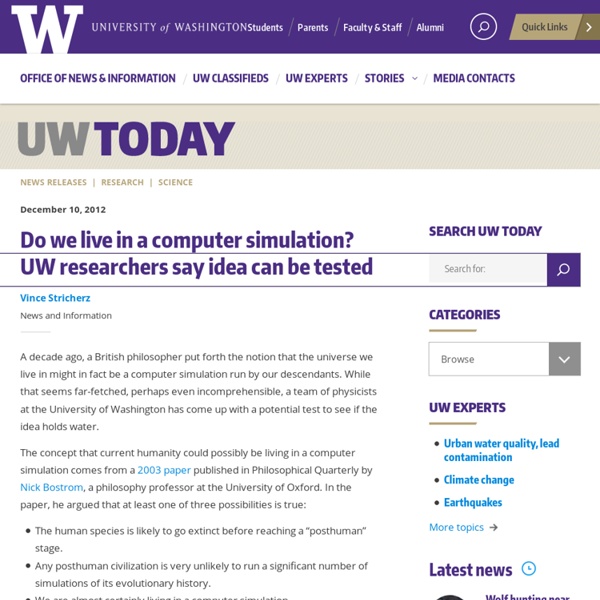 News releases | Research | Science December 10, 2012 A decade ago, a British philosopher put forth the notion that the universe we live in might in fact be a computer simulation run by our descendants. The concept that current humanity could possibly be living in a computer simulation comes from a 2003 paper published in Philosophical Quarterly by Nick Bostrom, a philosophy professor at the University of Oxford. The human species is likely to go extinct before reaching a “posthuman” stage.Any posthuman civilization is very unlikely to run a significant number of simulations of its evolutionary history.We are almost certainly living in a computer simulation. He also held that “the belief that there is a significant chance that we will one day become posthumans who run ancestor simulations is false, unless we are currently living in a simulation.” Eventually, more powerful simulations will be able to model on the scale of a molecule, then a cell and even a human being.

Snapping an atom's shadow? Now that's a first As the image above illustrates, my colleagues and I at Griffith University have been able to photograph the shadow of an atom for the first time – the culmination of five years of work by our team. The image, and attendant paper, are published today in the journal Nature Communications. So, in a nutshell, how did we get the image? The following analogy might help. On a sunny day at the beach, your shadow is a constant companion. If we were to take a closer look using a microscope we would see dark strands of tightly wound DNA in the nucleolus (composed of proteins and nucleic acids found within the nucleus) of the skin cells. The picture leading this article shows the shadow cast in a laser beam by a single Ytterbium atom suspended in empty space. Our lens is like a smaller versions of the lenses used in lighthouses – both have many separate segments all working in concert to focus the light. Implications

Is Life One Gigantic Computer Simulation? University of Washington scientists think they’ve found a way to test Nick Bostrom’s controversial 2003 theory. And now for a bit of news that you (and I) will almost certainly not understand: scientists at the University of Washington say they’ve devised a test that may prove whether or not the lives we live are actually just one giant computer simulation created by our future descendants. Yes, you read that right. The researchers are responding to a 2003 paper published in Philosophical Quarterly by Nick Bostrom, a philosophy professor at the University of Oxford, who posited that somewhere down the line humans will become smart enough (and computer processing powerful enough) to model entire universes, and that we might be one of them. “The belief that there is a significant chance that we will one day become posthumans who run ancestor simulations is false, unless,” he wrote—bum bum BUM! I’d go into more detail, but I’ve just ran out of processing power myself.

10 Interesting Futuristic Materials 1. Aerogel Aerogel holds 15 entries in the Guinness Book of Records, including "best insulator", and "lowest-density solid". Sometimes called "frozen smoke", aerogel is made by the supercritical drying of liquid gels of alumina, chromia, tin oxide, or carbon. 2. Carbon nanotubes are chains of carbon held together by the strongest bond in all chemistry, the sacred sp2 bond, even stronger than the sp3 bonds that hold together diamond. 3. "Metamaterial" refers to any material that gains its properties from its microscopic structure rather than bulk composition. 4. We're starting to lay down thick layers of diamond in CVD machines, hinting towards a future of bulk diamond machinery. 5. Diamonds may be strong, but aggregated diamond nanorods (ADNRs) are stronger. 6. Amorphous metals, also called metallic glasses, consist of metal with a disordered atomic structure. 7. A superalloy is a generic term for a metal that can operate at very high temperatures, up to about 2000 °F (1100 °C). 8. 9.

Bigfoot DNA Tests Prove Hairy Creature Exists, Genetic Researcher Says Bigfoot is real. At least that's what veterinarian Melba S. Ketchum claims after a five-year study of more than 100 DNA samples that she believes comes from the elusive hairy beast. Under Ketchum's direction at DNA Diagnostics in Nacogdoches, Texas, a team of researchers has concluded that the creature may be a human relative that somehow developed around 15,000 years ago as a result of a hybrid cross between Homo sapiens with an unknown primate. Ketchum's research has yet to stand the scrutiny of independent researchers. "Well, it came to me, I didn't go after it, that's for sure," Ketchum said of the evidence of Bigfoot's existence in an exclusive interview with The Huffington Post. Ketchum's professional work includes nearly 30 years in genetics research and forensics. DNA Diagnostics received more samples to investigate -- including hair, blood, saliva and urine, all reportedly from various Bigfoot sightings. Not so, counters Ketchum. Loading Slideshow

Muscular Christianity Muscular Christianity is a Christian commitment to piety and physical health, basing itself on the New Testament, which sanctions the concepts of character (Philippians 3:14) and well-being (1Corinthians 6:19–20).[1][2][3] The movement came into vogue during the Victorian era and stressed the need for energetic Christian evangelism in combination with an ideal of vigorous masculinity. Historically, it is most associated with the English writers Charles Kingsley and Thomas Hughes, and in Canada with Ralph Connor, though the name was bestowed by others. Kingsley and Hughes promoted physical strength and health as well as an active pursuit of Christian ideals in personal life and politics. Origins[edit] The term "Muscular Christianity" became well known in a review by the clergyman T. The idea was controversial. Influence[edit] Muscular Christianity spread to other countries in the 19th century. See also[edit] References[edit] Jump up ^ Marjorie B. External links[edit]

Blink and you'll miss it: Eye-control TV arrives which lets couch potatoes change the channel without lifting a finger By Eddie Wrenn Published: 10:17 GMT, 31 August 2012 | Updated: 17:05 GMT, 31 August 2012 Couch potatoes just found another excuse not to get off the sofa - a TV which can monitor your eyes and change the channel if you give it the nod. The Eye Control TV, by Chinese manufacturer Haier, comes with an admittedly bulky device that you place in front of your TV, and with a determined blink of your eyes you can change channels, change the volume, or power your television off. The eye-sensing technology relies on a Kinect-style sensor sat on your table, and Haier says your standard blinks will not interrupt your scheduled viewing. Scroll down for video No more lost remotes: The prototype sensor sits in front of the television, responding to blinks from the couch potato Blinks can bring up a menu bar, with a slide of your head allowing you to adjust the volume After that, long blinks activate the sensor, bringing up an on-screen display. VIDEO: Control the TV with with just your eyes

researchers discover a new kind of magnetism Following up on earlier theoretical predictions, MIT researchers have now demonstrated experimentally the existence of a fundamentally new kind of magnetic behavior, adding to the two previously known states of magnetism. Ferromagnetism — the simple magnetism of a bar magnet or compass needle — has been known for centuries. In a second type of magnetism, antiferromagnetism, the magnetic fields of the ions within a metal or alloy cancel each other out. In both cases, the materials become magnetic only when cooled below a certain critical temperature. The prediction and discovery of antiferromagnetism — the basis for the read heads in today’s computer hard disks — won Nobel Prizes in physics for Louis Neel in 1970 and for MIT professor emeritus Clifford Shull in 1994. “We’re showing that there is a third fundamental state for magnetism,” says MIT professor of physics Young Lee. Finding the evidence The material itself is a crystal of a mineral called herbertsmithite. Scattering neutrons

Disembodied Erotomania Inspired by Matt’s The Incubus Made Me Do It post from last week, it occurred to me that I’d actually written an entire chapter on the rarely explored topic of astral molestation in my first book. It’s out of print and I’m quite sure none of you have read it, so we’ll just mine it a bit at this point as I finish the final edits for my next book on occult weirdness (out spring 2013). Maybe I’ll do a re-release some day, but truthfully, I basically did nothing to promote the thing because I didn’t like it much. Parts are great but overall, way too dark. As was the nature of my life at the time. For now, let’s talk about sex with the spirits. “Less than a week after the first time I had sex, something completely unexpected and incontrovertibly unnerving occurred. So that was the first foray into this sort of madness. “The only thing I honestly recall of the experience is that I was sleeping in the same bed as this girl, not fucking mind you, just sleeping.

Toward a New Model of the Cell Date: December 17, 2012 Everything You Always Wanted to Know About Genes Turning vast amounts of genomic data into meaningful information about the cell is the great challenge of bioinformatics, with major implications for human biology and medicine. Researchers at the University of California, San Diego School of Medicine and colleagues have proposed a new method that creates a computational model of the cell from large networks of gene and protein interactions, discovering how genes and proteins connect to form higher-level cellular machinery. The findings are published in the December 16 advance online publication of Nature Biotechnology. “Our method creates ontology, or a specification of all the major players in the cell and the relationships between them,” said first author Janusz Dutkowski, PhD, postdoctoral researcher in the UC San Diego Department of Medicine. “What’s new about our ontology is that it is created automatically from large datasets.