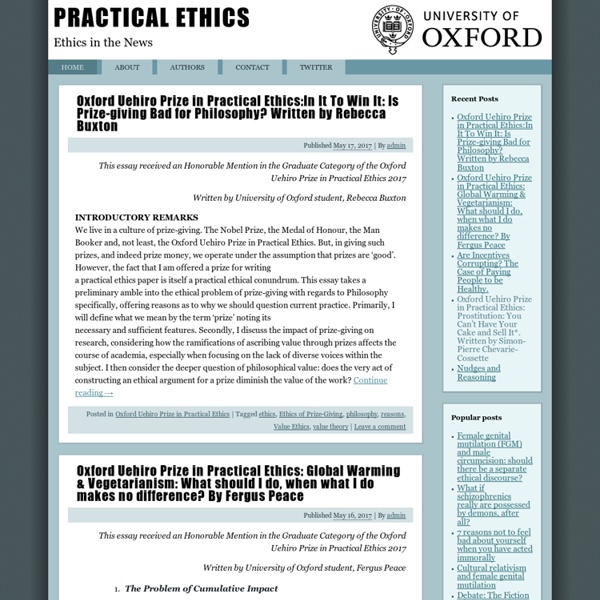 Welcome to Philosophical Investigations Experimental Philosophy I've been thinking a great deal lately about how best to study moral judgment. Let me say a few things myself, but I hope others will be able to chime in and share ideas, especially since I'm in the process of designing some studies. What's best to measure? So far it seems most researchers focus on measuring something other than what we might call purely "evaluative judgments," such as whether someone did something good or bad. This seems right to me since these don't necessarily constitute judgments about whether an action is right or wrong, which is paradigmatically a moral verdict. So I think rightly the focus has been instead on what we might call "deontic judgments" such as whether an act is right/wrong, permissible/impermissible, etc. How best to measure it? Some researchers present participants with a forced, dichotomous choice. One potential problem with this, however, is that the forced-choice situation provides no option for participants to register uncertainty. Another Tack?

orsakverkan. Philosophy association board reaches out to victims of sexual assault and harassment It’s hard these days to talk about women in philosophy without talking about sexual harassment and assault and sexism in general. Whether conditions for women in the discipline are actually worse than they are in the humanities overall is up for debate and likely impossible to quantify, but philosophy has attracted much criticism in recent years for what some have called a systemic discrimination problem. From accounts on the blogs What Is It Like to Be a Woman in Philosophy? In perhaps its strongest statement on the matter yet, the association’s Board of Officers is releasing later Tuesday morning a letter acknowledging the suffering experienced by victims of sexual assault and harassment. The letter addresses familiar complaints by some victims that their harassers have been less than adequately punished for their actions, taking a leave of absence or a new job. The letter also potentially puts harassers on watch. Mixed Reaction So how can an association board serve members?