How I Study Animation 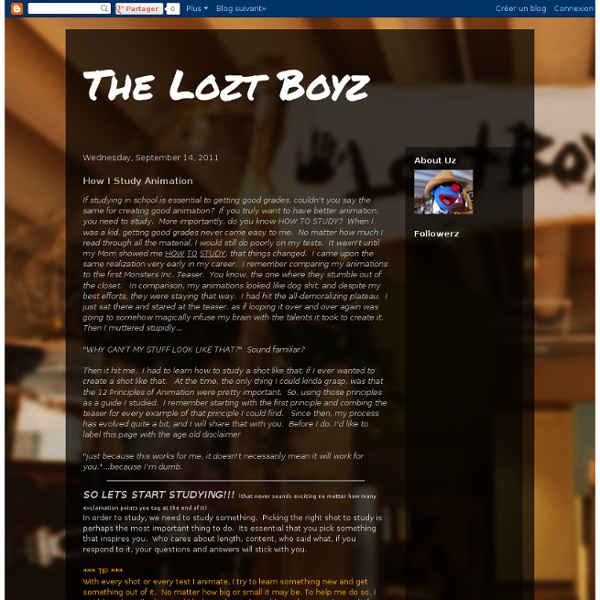 If studying in school is essential to getting good grades, couldn't you say the same for creating good animation? If you truly want to have better animation, you need to study. More importantly, do you know HOW TO STUDY? "WHY CAN'T MY STUFF LOOK LIKE THAT?" Then it hit me. "just because this works for me, it doesn't necessarily mean it will work for you."...because I'm dumb. SO LETS START STUDYING!!! In order to study, we need to study something. With every shot or every test I animate, I try to learn something new and get something out of it. For this demonstration I have selected a shot from the movie THE SECRET OF NIMH. My first group of questions are pretty standard. Can you give a brief description of the shot? Its a scene from The Secret of Nimh, in which Miss Brisby soaks her cut arm in a water dish within a birdcage. If not a stand alone, what is the context of the shot? Why Did I pick this shot? As a kid I would rewind my VHS tape and watch this sequence over and over again. ...Why?

Speaking of Animation » Archive for year 2011 I had a chance to check out this past weekends animation offerings and I must say that I was thrilled with both. First was the Toy Story short Small Fry that is playing in front of The Muppets. This is the first animation I’ve seen from Pixar’s new studio Pixar Canada. It came out great and for a short the quality was right up there with the film. The story was fun and very entertaining. I then went and saw Arthur Christmas. Let us know if you had a chance to see either of these two this past weekend and tell us what you thought in the comments below. Thanks, -Steve Thinking Animation Blog: 10ThingsToThinkAbout 10 Things to Think About - from the book Thinking Animation by Angie Jones and Jamie Oliff. This is one of the lectures I use at the online school ianimate.net. I created this list for my book Thinking Animation to help animators create a clear and solid message with their work. #9 Eyes: (This particular lecture is much longer when I teach. Basic Notes on animating Eyes: Eyes are windows into the soul and the soul is controlled by the mind.Eye darts and glances tell more than any other gestures in the body when used in the right place in the scene. Overview of Eye Movement: Never animate without a reason! ...eye shape: when the iris moves around the eye the lid cuts across it changing its shape from round to oval. ...lid shape: The lid itself changes shape as the eye line changes and the brow pushes down on it with emotional poses. ...darts: Darts tell us the character is thinking, confused or trying to understand something. ...blinks: Never blink unless there is a reason! Eye Darts:

Toon In… to the World of Animation The AniMazing Spotlight website is full of information on this year’s festival, coming up in just 3 weeks, September 4 & 5, at Woodbury University, in Burbank. Visit their web site at www.animazspot.com, then click the big white panel at the top of the Home page, with Lou Romano’s Juggler, which he designed exclusively for the festival. Clicking this panel takes you to their Festival page. If you scroll down you see all the festival events, one of which we’ll talk about next, screenings of all the shorts nominated in various categoies, advertising opportunities, collectables to purchase, awards presentations, eateries near by, and more. But, the highlight for us is the very first “Toon in to the World of Animation” event, outside of this podcast. We are hosting an event on Sunday, from 12:30 to 1:30, in Section 3, called “I Did it My Way“, which features about two dozen of our Toon In interviews, talking about how they got interested in getting into animation.

The Cinematography of "The Incredibles" - Part 1 Whether its up shots or down shots, you'll often find these lines that run through the character's eyes, again unconsciously leading your eyes to where the director wants you to focus. With so many nice angles that keep making the shots look visually interesting even when they are meant to be very simple, all reminds of the show Mad Men. Almost that retro look, I suppose The Incredibles is meant to be set in the 50s and then once they flash forward to after the marriage and the trial we're in the 60s. Off-center subjects can be balanced on the opposite side of the frame with leading lines, shadows, and objects in the foreground or background. See all the crazy angles in the following shots. Watch the story reel (animatic) for this sequence here. Courtesy of Carlos Baena. Establishing shot to show where we are. The camera moves here, telling us where to go and where the character is looking and going. The following shots cut fast, with the on-screen action moving quick as well.

11 Second Club - The Monthly Character Animation Competition Film/Book Analysis | AnimatedSpirit In this series of Favorite Films, we’ll feature the genre that drove many of us to do what we do: Animation. There are countless films that feature the use of animation, from live action to fully-animated cartoon features, including those that have lost their grasp in our fast-growing technological society, namely Hand-Drawn (2D) animation and Stop-Motion (sometimes referred to as claymation). Despite the host of good CG films that have been made in the past couple of decades I opted for this select group of traditionally crafted films because of their extraordinary quality and their impact on me personally. You may feel differently. That said, I hope that you’ll revisit these films (assuming you’ve watched them all before) and see them as the incredible wonders that they are. Pinnochio (directed by Ham Luske & Ben Sharpsteen) According to Animation critic and historian, Charles Soloman, “Pinocchio remains the most perfect animated feature Walt Disney produced.” The Fantastic Mr.

News Flooby Nooby: Cinematography Something I try to make clear on a regular basis is that cinematography is only a part of the many pieces that make up a film. Lighting, blocking and framing aside, colour and set design are obviously a big part of what we need to pay attention to, and here you can see a very specific pallet has been chosen for this film. From scene to scene there are different splashes here and there, but overall, shadows are warm and highlights cool - often, it's the other way around. Regardless, I absolutely love how colour was handled in this film. The pace of the first chapter is so perfect and the tension that Tarantino builds is almost traumatizing!

AnimSchoolBlog Visual Storytelling in Filmmaking | DSLRguide February 22, 2015 Film is a brilliant combination of written word, music, sound and pictures, so this week we’re looking at the ways we can tell a story visually, rather than always relying on dialogue to explain things. Too often, we rely on a narrator to tell the story, or have characters awkwardly explain things to each other so the audience can understand. However it’s true that films do usually need dialogue, and there’s nothing inherently wrong with using a narrator. The key is to be on the look out for better ways to tell the story, and this often means using visuals. It’s one thing for a character to say exactly how they are feeling, but if can get them to show how they’re feeling then that frees up the dialog for other uses. If our film is just a sequence of dialog scenes, why not make a radio show? One of the least talked about parts of filmmaking, the set design costume and locations play a huge role in the visuals of a film. A necklace from her late husband. Simon Cade

The Power of Posing | ..::avneriginal::.. Head over to Vanity Fair for a great article by the photographer Howerd Schatz. He photographed actors at his studio in a series of roles and dramatic situations to reveal the essence of their characters. My top three are: GEOFFREY RUSHLeft: You’re the cornerman for a winded female boxer, desperately exhorting her: “She’s run away with your boyfriend! She’s kidnapped your kid! Get out there and kill that heifer!” JOHN GOODMANLeft: You’re a geek flirting with a cheerleader, unaware that you don’t stand a chance. IAN McSHANELeft: You’re a politically ambitious prosecutor trying a sensational murder case, and you’ve just realized that the defense’s key witness has given you a huge opening to prove that he’s lying. Here are the rest of the images from the article.

Gorilla Resources Page Turn your computer into a lightbox. A free version of Photoshop with layers and a nice brush tool. Also can open and save PSD files if you install this plug in. Easily the best free video editing program around. Play AVIs, MOVs, SWFs and DVDs all with one player. The Personal Learning Edition of Maya, puts a nasty water mark on your renders, but its pretty amazing that you can download and learn the same animation software used at Pixar, Dreamworks and Disney for free. Blender is the best free open source 3D animation package on the net. Active Pen lets you draw over the top of other programs, great for analysing the line of action in that pose or planing the arc you want something to follow.