The Science of Procrastination and How to Manage It, Animated 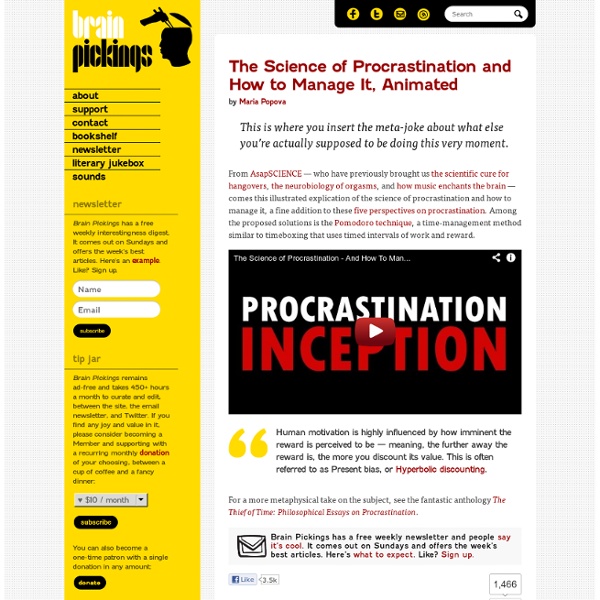 The Genius of Dogs and a Dimensional Definition of Human Intelligence by Maria Popova “Genius means that someone can be gifted with one type of cognition while being average or below average in another.” For much of modern history, dogs have inspired a wealth of art and literature, profound philosophical meditations, scientific curiosity, deeply personal letters, photographic admiration, and even some cutting-edge data visualization. Despite the mind-numbing title, The Genius of Dogs: How Dogs Are Smarter than You Think (public library; UK) by Brian Hare, evolutionary anthropologist and founder of the Duke Canine Cognition Center, and Vanessa Woods offers a fascinating tour of radical research on canine cognition, from how the self-domestication of dogs gave them a new kind of social intelligence to what the minds of dogs reveal about our own. In examining the definition of genius, Hare echoes British novelist Amelia E. As you probably remember, tests such as IQ tests, GREs, and SATs focus on basic skills like reading, writing, and analytical abilities.

The Science of Orgasms and Your Brain on Porn By Maria Popova We’ve already explored the origins of sex, the neurochemistry of heartbreak, and how drugs affect desire. But what, exactly, happens in the brain when the body belts out its ultimate anthem of sexual triumph? Count on creative duo Mitchell Moffit and Gregory Brown, better known as AsapSCIENCE — who have previously explained how music enchants the brain and what science teaches us about curing hangovers — to break down the body’s response during orgasm: But what about sexual experiences that don’t involve direct contact with a partner? For more on this ceaselessly fascinating tangle of biology and behavior, see the recently released The Chemistry Between Us: Love, Sex, and the Science of Attraction by neuroscientist Larry Young and journalist Brian Alexander, who take us inside the living brain to explore how its neurotransmitters, hormones, and circuits shape the very behaviors we find ourselves most invested in.

How to Think Like Sherlock Holmes: Lessons in Mindfulness and Creativity from the Great Detective by Maria Popova “A man’s brain originally is like a little empty attic, and you have to stock it with such furniture as you choose.” “The habit of mind which leads to a search for relationships between facts,” wrote James Webb Young in his famous 1939 5-step technique for creative problem-solving, “becomes of the highest importance in the production of ideas.” But just how does one acquire those vital cognitive customs? That’s precisely what science writer Maria Konnikova explores in Mastermind: How to Think Like Sherlock Holmes (UK; public library) — an effort to reverse-engineer Holmes’s methodology into actionable insights that help develop “habits of thought that will allow you to engage mindfully with yourself and your world as a matter of course.” The idea of mindfulness itself is by no means a new one. It is most difficult to apply Holmes’s logic in those moments that matter the most. Our intuition is shaped by context, and that context is deeply informed by the world we live in.

How Mind-Wandering and “Positive Constructive Daydreaming” Enhance Creativity and Improve Our Social Skills by Maria Popova The science of why fantasy and imaginative escapism are essential elements of a satisfying mental life. Freud asserted that daydreaming is essential to creative writing — something a number of famous creators and theorists intuited in asserting that unconscious processing is essential to how creativity works, from T. S. Eliot’s notion of “idea incubation” to Alexander Graham Bell’s “unconscious cerebration” to Lewis Carroll’s “mental mastication.” In the 1950s, Yale psychologist Jerome L. In a recent paper titled “Ode to Positive Constructive Daydreaming” (PDF), published in the journal Frontiers in Psychology, writer Rebecca McMillan and NYU cognitive psychologist Scott Kaufman, author of Ungifted: Intelligence Redefined, revisit Singer’s work to deliver new insights into how the first style of Singer’s mind-wandering, rather than robbing us of happiness, plays an essential, empowering role in daily life and creativity. Thanks, Scott Myers Donating = Loving Share on Tumblr

The Baloney Detection Kit: Carl Sagan’s Rules for Bullshit-Busting and Critical Thinking By Maria Popova Carl Sagan was many things — a cosmic sage, voracious reader, hopeless romantic, and brilliant philosopher. But above all, he endures as our era’s greatest patron saint of reason and common sense, a master of the vital balance between skepticism and openness. In The Demon-Haunted World: Science as a Candle in the Dark (public library) — the same indispensable volume that gave us Sagan’s timeless meditation on science and spirituality, published mere months before his death in 1996 — Sagan shares his secret to upholding the rites of reason, even in the face of society’s most shameless untruths and outrageous propaganda. Through their training, scientists are equipped with what Sagan calls a “baloney detection kit” — a set of cognitive tools and techniques that fortify the mind against penetration by falsehoods: The kit is brought out as a matter of course whenever new ideas are offered for consideration. Sagan ends the chapter with a necessary disclaimer:

Secrets of the Creative Brain As a psychiatrist and neuroscientist who studies creativity, I’ve had the pleasure of working with many gifted and high-profile subjects over the years, but Kurt Vonnegut—dear, funny, eccentric, lovable, tormented Kurt Vonnegut—will always be one of my favorites. Kurt was a faculty member at the Iowa Writers’ Workshop in the 1960s, and participated in the first big study I did as a member of the university’s psychiatry department. I was examining the anecdotal link between creativity and mental illness, and Kurt was an excellent case study. He was intermittently depressed, but that was only the beginning. His mother had suffered from depression and committed suicide on Mother’s Day, when Kurt was 21 and home on military leave during World War II. His son, Mark, was originally diagnosed with schizophrenia but may actually have bipolar disorder. While mental illness clearly runs in the Vonnegut family, so, I found, does creativity. “Doing good science is … like having good sex.

studies_shows_why_boredom_may_boost_creativity Photo by Oli Scarff/Getty Images This story first appeared in Inc. These days there are more options than ever to avoid ever feeling truly bored. Got five minutes to spare? Whip out your phone for some gaming or trawl through Twitter. Have a bit more time? At first blush that sounds like a great thing. How? Researchers recently confirmed the counterintuitive creativity-boosting effects of boredom by subjecting one group of study participants to the mind-numbing task of copying out the telephone book for 15 minutes. A follow-up study compared those who were given passive but boring tasks (just reading the phone book, i.e. the rough equivalent of hearing someone drone on stultifyingly at a meeting) to those completing the original active but boring task of writing out telephone numbers. The author of the telephone book study, Dr. Bosses, she notes, who demand constant busyness may actually be inadvertently denting their team's creativity.

Swami Vivekananda on the Secret of Work: Intelligent Consolation for the Pressures of Productivity from 1896 by Maria Popova “Every work that we do… every thought that we think, leaves such an impression on the mind-stuff…” In December of 1895, the renowned Indian Hindu monk and philosopher Swami Vivekananda, then in his early thirties, traveled to New York, rented a couple of rooms at 228 West 39th Street, where he spent a month holding a series of public lectures on the notion of karma — translated as work — and various other aspects of mental discipline. They attracted a number of famous followers, including groundbreaking inventor Nikola Tesla and pioneering psychologist and philosopher William James, and were eventually transcribed and published as Karma Yoga: The Yoga of Action (public library) in 1896. Vivekananda begins by noting that a great deal of our existential confusion about work has to do with our chronic judgment — and, most cripplingly, self-judgment — regarding “good” and “bad.” (Cue in Joan Didion on character.) Do you not see how everybody works? Donating = Loving