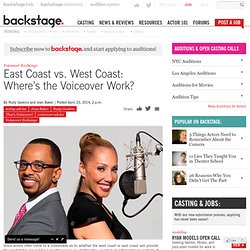 Voice actors often come to a crossroads as to whether the west coast or east coast will provide the most fertile ground for a gainful career, or whether they can truly live their dreams outside of these two media behemoths. New York and Los Angeles are generally the cities in question, though solid opportunities abound in Chicago, Atlanta, Miami, Dallas and elsewhere. The good news is that you can have success on either coast, and being bicoastal or multi-regional is a growing reality, even if a virtual one. For most folks this quandary has to do with L.A. and N.Y. The challenge is taking a hard look at the differences between the two regions as they relate to your skill set, personal resources, lifestyle, and networking style. 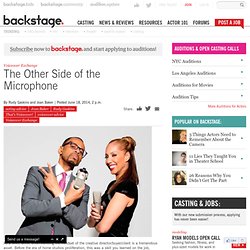 As a voice actor, understanding the mindset of the creative director/buyer/client is a tremendous asset. Before the era of home studios proliferation, this was a skill you learned on the job, working with them face to face. Kalmenson Voice Casting and Voice Over Classes- Upcoming Class Cycles. Vo2gogo.com. 90210 Talent. Vo2gogo.com. An Audible Approved Producer's insider secrets for voice actors wanting to record ACX audio books via Audiobook Creation Exchange. Dave Courvoisier's Blog. Braintracks Audio. Pursuing a new line of business requires an investment of both time and money. 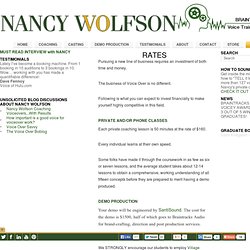 The business of Voice Over is no different. Following is what you can expect to invest financially to make yourself highly competitive in this field. Each private coaching lesson is 50 minutes at the rate of $160. Every individual learns at their own speed. Some folks have made it through the coursework in as few as six or seven lessons, and the average student takes about 12-14 lessons to obtain a comprehensive, working understanding of all fifteen concepts before they are prepared to merit having a demo produced.

Cashman Commercials. BTA Sound Real. I really loved the videos and so appreciate all the information. 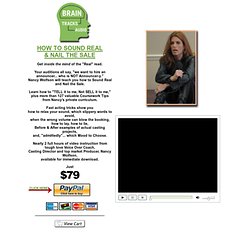 I've been auditioning a lot more because I'm feeling so confident. I'm actually ranked as a favorite on 3 projects right now. I used to barely be listened to. I am seriously working studying with you into my business plan. Thank you for all you do. Voice Over Resource Guide - Training. Garden of Sound Voice Over Studio. TUESDAY November 12th with Ilko Drozdoski from TGMD 7:30-9:30pm - Garden of Sound. November 12th – Ilko Drozdoski with TGMD – PLEASE NOTE THIS IS ON A TUESDAY!!! 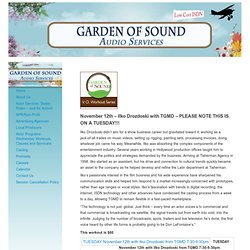 Ilko Drozdoski didn’t aim for a show business career but gravitated toward it; working as a jack-of-all trades on music videos, setting up rigging, painting sets, processing invoices, doing whatever job came his way. Meanwhile, Ilko was absorbing the complex components of the entertainment industry. Several years working in Hollywood production offices taught him to appreciate the politics and strategies demanded by the business.

Arriving at Tisherman Agency in 1998, Ilko started as an assistant, but his drive and connection to cultural trends quickly became an asset to the company as he helped develop and refine the Latin department at Tisherman. Ilko’s passionate interest in the film business and his wide experience have sharpened his communication skills and helped him respond to a market increasingly concerned with prototypes, rather than age ranges or vocal styles. “The technology is not just global. Audiobook Creation Exchange Blog (ACX) Welcome to the third part of our popular Studio Gear series. 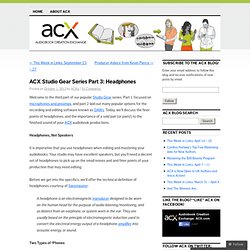 Part 1 focused on microphones and preamps, and part 2 laid out many popular options for the recording and editing software known as DAWs. Today, we’ll discuss the finer points of headphones, and the importance of a sold pair (or pairs!) To the finished sound of your ACX audiobook productions. Headphones, Not Speakers. Demo Production. "A La Carte" Demo Coaching & Production Robin will help you through any and all parts of the process you need, including Material Selection: helping you find what genres and material best show-off your abilities and match the market Pre-session Coaching: Adjusting your pacing, proper word stress, and finding the author's point of view and releasing the emotional content of the characters and overall material. 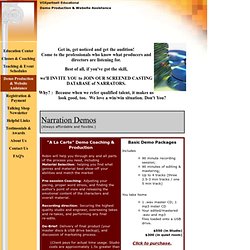 Recording direction: Securing the highest quality studio and engineer, overseeing takes and re-takes, and performing any final re-edits. De-Brief: Delivery of final product (your master discs & USB drive backup), and discussion of marketing process. (Client pays for actual time usage. Note: Demo Production costs hinge in part on your preparedness: you can greatly reduce them by being ready for coachings and recording.