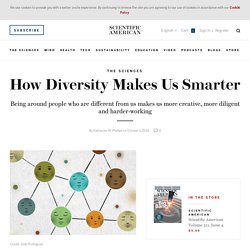 In the U.S., where the dialogue of inclusion is relatively advanced, even the mention of the word “diversity” can lead to anxiety and conflict. Supreme Court justices disagree on the virtues of diversity and the means for achieving it. Corporations spend billions of dollars to attract and manage diversity both internally and externally, yet they still face discrimination lawsuits, and the leadership ranks of the business world remain predominantly white and male. It is reasonable to ask what good diversity does us. Diversity of expertise confers benefits that are obvious—you would not think of building a new car without engineers, designers and quality-control experts—but what about social diversity? The fact is that if you want to build teams or organizations capable of innovating, you need diversity. Research on large, innovative organizations has shown repeatedly that this is the case.

What is the value of a scientific article? *The embed functionality can only be used for non commercial purposes. 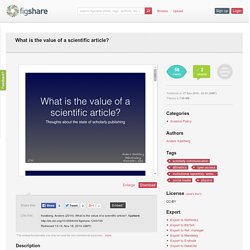 In order to maintain its sustainability, all mass use of content by commercial or not for profit companies must be done in agreement with figshare. Seminar given in Nice, France, 19th November 2014 (in French). English abstract: The advent of things like digital content, the internet and the movements on open access and open science has profoundly changed the playing field in the dissemination of science. Nevertheless, the scientific article remains the dominating way to validate and to diffuse scientific endeavors, and the central components in evaluation of science are still the journal impact factor, and various forms of publication and citation statistics.

Traditionally, scientific interactions other than articles, such as discussions, debates, seminars and media coverage, have mostly been ephemeral in nature. There are already companies that do this, and their services are for example bought by some publishers. Mouvement Open Data : histoire, ambition, ambiguïtés, militantisme, déception. Data Mining Methods for the Content Analyst: An Introduction to the Computational Analysis of Content. With continuous advancements and an increase in user popularity, data mining technologies serve as an invaluable resource for researchers across a wide range of disciplines in the humanities and social sciences. 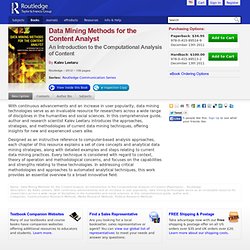 Confessions of an Aca-Fan — — The Official Weblog of Henry Jenkins. Who should see what when? Three principles for personalized news. I really don’t know how a news editor should choose what stories to put in front of people, because I don’t think it’s possible to cram the entire world into headlines. 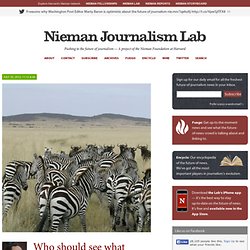 The publisher of a major international newspaper once told me that he delivers “the five or six things I absolutely have to know this morning.” But there was always a fundamental problem with that idea, which the Internet has made starkly obvious: There is far more that matters than any one of us can follow. In most cases, the limiting factor in journalism is not what was reported but the attention we can pay to it. Yet we still need news. Something’s got to give. If not every person sees the same news at the same time, then the question becomes: Who should see what when? You specifically go looking for it.It affects you or any of your communities.There is something you might be able to do about it. Making Web applications more efficient. Most major websites these days maintain huge databases: Shopping sites have databases of inventory and customer ratings, travel sites have databases of seat availability on flights, and social-networking sites have databases of photos and comments. 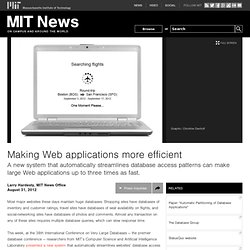 Almost any transaction on any of these sites requires multiple database queries, which can slow response time. This week, at the 38th International Conference on Very Large Databases — the premier database conference — researchers from MIT’s Computer Science and Artificial Intelligence Laboratory presented a new system that automatically streamlines websites’ database access patterns, making the sites up to three times as fast. And where other systems that promise similar speedups require the mastery of special-purpose programming languages, the MIT system, called Pyxis, works with the types of languages already favored by Web developers.