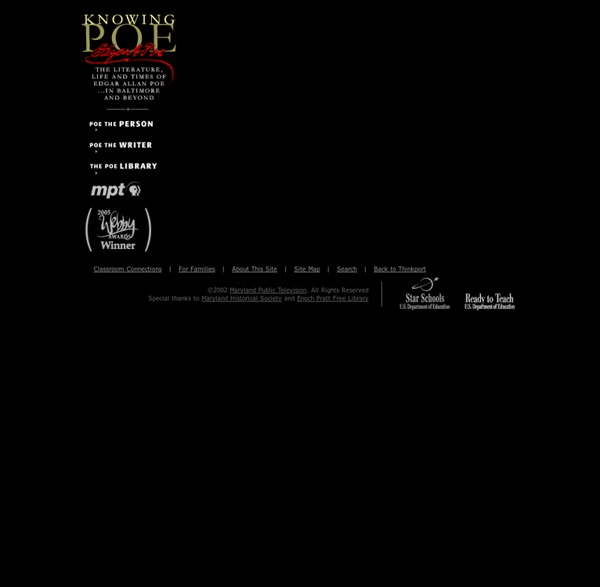 Ode to Poetry – Websites to Generate Student Poetry Online One of my favorite units to teach is poetry. The playing with words, the cleverness of students, and the discovering of new ways to describe a simple object always gives me a thrill. I mean really. How often does one get to use words like hanker after to replace want or quick on the uptake for clever? DIY Solar Lamp: Make Your Own Eco-Friendly Sun Jars The principle is simple and seductively clever: solar lights that store energy during the day and release light at night. These can be purchased ready-made in a variety of colors (yellow, blue and red) but they can also be built at home. A simple, less-technical approach involves buying a conventional solar-powered yard lamp and then essentially harvesting it for key pieces to put in a jar. This is simply a way of taking an existing solar lamp design and appropriating its parts to make something more attractive for display around a house or home.

SAVE THE POE HOUSE AND MUSEUM IN BALTIMORE Patricia Riffe, WA Jan 10, 13:03 Of course this should someday become self sustaining but now is not that time - let them continue as is and get a group together to set up fundraising before throwing this to the curb. Poe was one of our greatest poets! How to Create an Awesome Summer Reading List Here's my one bit of advice on the subject — summer is for reading stuff you *want* to read, not stuff you *have* to, or stuff you feel like you *need* to. I review books for my web site, and I can't say that I ever enjoy them enough to carry them to the beach, you know what I mean? That's a job. And then at times I'll get into an "I'm too unproductive" mood and suddenly feel like my free time has to be spent learning important things, so I'll go read business books and self help books and other things that I feel like I'm reading because of some specific benefit I need to achieve. But when I hit the beach it's going to be stuff like Girl With The Dragon Tattoo on my Kindle. I will gain nothing from the experience other than whether I liked it or did not.

ONLINE SUPERHEROES: BATTLE FOR THE INTERNET - StumbleUpon From the creative mind of Caldwell Tanner, illustrator of College Humor, writer of his own captivating and hilarious illustration blog, and graphic artist/comedian extraordinaire, now comes “The Internet League of Justice” illustration series! Imagine if the most popular online websites and social media networks were superheroes! What powers would they have? See Also REAL LIFE DISNEY PRINCESSES Who would their nemeses be? Thanks to Tanner’s amazing wit and humor, we don’t have to guess anymore! EyeWitness To The Middle Ages and Renaissance Life in a Christian Monastery, ca. 585"When he was dead his body was not placed with the bodies of the brethren, but a grave was dug in the dung pit, and his body was flung down into it. . . " Crime and punishment in a medieval monastery: the monastery's Abbott provides insight into the monastic life. The Vikings Discover America, ca. 1000"There was no want of salmon either in the river or in the lake." Five hundred years before Columbus, the Vikings discover a New World.

Edgar Allan Poe’s Eerie Richard Parker Coincidence Even Edgar Allan Poe, master of eerie twists and turns, would have been mystified by this mind-boggling coincidence created in part by one of his stories. But let's start from the beginning. In 1838, Poe's only novel was published - The Narrative of Arthur Gordon Pym of Nantucket . Partway through the book, the crew of a ship called Grampus finds themselves with a busted boat and no food or water. They manage to catch a tortoise and strip off its shell, but eventually, in order to survive, the crew draws straws to figure out which of them will be sacrificed to provide meat for everyone else. The death straw goes to a former mutineer named Richard Parker, who is promptly stabbed to death; his head, hands and feet thrown overboard (you can read the whole grisly thing here ).