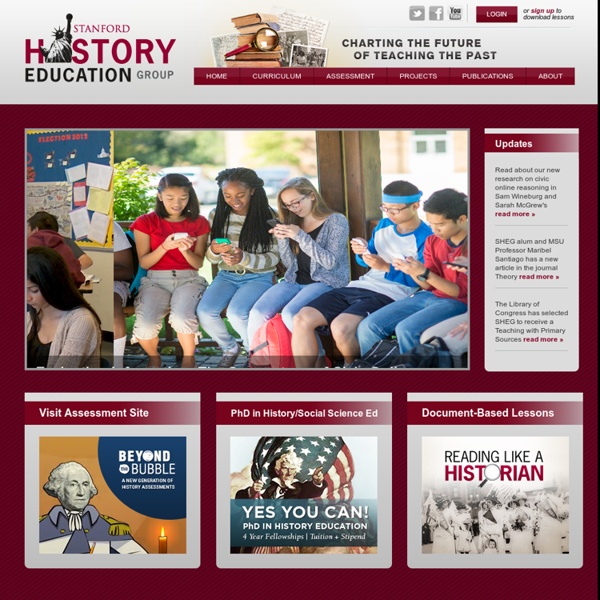 Reading Like A Historian The Reading Like a Historian curriculum engages students in historical inquiry. Each lesson revolves around a central historical question and features sets of primary documents designed for groups of students with diverse reading skills and abilities. This curriculum teaches students how to investigate historical questions by employing reading strategies such as sourcing, contextualizing, corroborating, and close reading. Instead of memorizing historical facts, students evaluate the trustworthiness of multiple perspectives on historical issues. They learn to make historical claims backed by documentary evidence.

Hypertext Essay Hypertext is writing on the web that incorporates the use of hyperlinks. This is its main feature and what makes it different from regular writing. While we read most book text or papertext from top to bottom, left to right, front to back, we don't necessarily read hypertext in the same linear way. Hypertext is read differently by each reader, and therefore each hypertext document continues to change. How to read and understand a scientific paper: a guide for non-scientists From vaccinations to climate change, getting science wrong has very real consequences. But journal articles, a primary way science is communicated in academia, are a different format to newspaper articles or blogs and require a level of skill and undoubtedly a greater amount of patience. Here Jennifer Raff has prepared a helpful guide for non-scientists on how to read a scientific paper. These steps and tips will be useful to anyone interested in the presentation of scientific findings and raise important points for scientists to consider with their own writing practice.

SearchReSearch: Answer: Fake or real? How do you know? 1. Is this a faked photo? If so, how can you tell? (Be specific.) 100 Best TED Talks November 10, 2011 After watching or listening to hundreds of the most popular and highest rated TED talks, we've compiled this list of the 100 Best TED Talks of All Time! For over five years now the Technology, Entertainment, Design (TED) Conference has been releasing talks from their conference on video featuring leading thinkers not only in technology, entertainment, and design, but also science, psychology, personal growth, and numerous other areas. They now offer over 900 talks on their website and numerous other TED conferences have popped up including TED Global, TED India, TED Women, and 100s of TEDx Events which have produced almost 10,000 TEDx videos on YouTube. For this top 100 list we've selected mostly videos from the main TED conferences but have also added some talks from these special TED events. We've divided the top 100 list up by categories and ranked the TED talks within each category according to the ones we enjoyed the most.

Five Strategies to Help Students Conduct Better Informational Searches Google is great for navigational and transactional searches. If you need to find your way to the movie theater or find the best price for a vacuum cleaner, Google handles those requests quite well. Searches for more meaningful information aren't always handled well by Google. For example, see the some of the nonsense "suggested" search terms that sometimes appear with your search. SearchReSearch: Search Challenge (11/11/15): Fake or real? How do you know? Unfortunately... ... people have been faking stories, photos, and claims for as long as humans have been around. Of course now we're aided by technology, which sometimes makes these deceptions a bit more difficult to ferret out. Here's an early famously faked photograph: This is one of the images of the Cottingley Fairies. In 1920, a series of photos, supposedly taken by two young girls while playing in the garden, claimed to show that fairies really did exist.

World War II: After the War - In Focus At the end of World War II, huge swaths of Europe and Asia had been reduced to ruins. Borders were redrawn and homecomings, expulsions, and burials were under way. But the massive efforts to rebuild had just begun. When the war began in the late 1930s, the world's population was approximately 2 billion. In less than a decade, the war between the Axis the Allied powers had resulted in 80 million deaths -- killing off about 4 percent of the whole world.

Here Is A Great Educational Tool for Digital Curation March , 2016 Candy is a cool Chrome extension that allows you to capture ideas and thoughts from any web page and use them in your writing projects. You simply highlight the sentences or portion of text you are interested in and Candy saves and displays it in a card together with the author and the source information. You can embed these cards in your documents (online and offline), share them via email or on popular social media networks such as Twitter and Facebook or embed them in your blog or website the same way you embed a YouTube video. Candy can be of great help to students. They can use it to insert quotations from any webpage right into the document they are working on. It can also be used to generate reference information to data in a document.

How Photos Fuel the Spread of Fake News During a campaign stop in South Carolina last winter, Hillary Clinton stumbled as she climbed the steps of an antebellum mansion in Charleston. Aides helped her regain her balance in a vulnerable but nondescript moment captured by Getty photographer Mark Makela. He didn’t think much of it until August, when the alt-right news site Breitbart touted it as evidence of Clinton’s failing health. “It was really bizarre and dispiriting to see,” he says. “We’re always attuned to photographic manipulation, but what was more sinister in this situation was the misappropriation of a photo.” Misappropriation and misrepresentation of images helped drive the growth of fake news.

Dipsticks: Efficient Ways to Check for Understanding What strategy can double student learning gains? According to 250 empirical studies, the answer is formative assessment, defined by Bill Younglove as "the frequent, interactive checking of student progress and understanding in order to identify learning needs and adjust teaching appropriately." Unlike summative assessment, which evaluates student learning according to a benchmark, formative assessment monitors student understanding so that kids are always aware of their academic strengths and learning gaps. Meanwhile, teachers can improve the effectiveness of their instruction, re-teaching if necessary. "When the cook tastes the soup," writes Robert E.

7 Ways Students Use Diigo To Do Research and Collaborative Project Work January 14, 2015 Diigo is an excellent social bookmarking tool that enable you to save, annotate, and share bookmarks. The power of Diigo lies in the distinctive features that it offers to teachers and educators. There is a special account for K-12 and higher-ed educators that empower registered teachers with a variety of tools and features.

Reconstructions — Carnuntum Uniquely throughout the world, the basic types of architecture in a Roman city quarter have been reconstructed in Carnuntum in their historical context: a citizen’s house, a splendid city mansion and public baths. The reconstructions are not fictitious sets or museum objects, but buildings that can be lived in. This means that all the buildings have been equipped with Roman underfloor heating systems and fully-functioning kitchens, and all the rooms are furnished. All layouts and decorative details refer to a single era, as does the level of the streets in the city quarter. Thus a unique time frame is opened in the first five decades of the 4th century AD. Reconstructions are based on detailed archaeological investigations.

10 Hilarious Hoax Sites to Test Website Evaluation – TeachBytes In this day and age, where anyone with access to the internet can create a website, it is critical that we as educators teach our students how to evaluate web content. There are some great resources available for educating students on this matter, such as Kathy Schrock’s Five W’s of Website Evaluation or the University of Southern Maine’s Checklist for Evaluating Websites. Along with checklists and articles, you will also find wonderfully funny hoax websites, aimed at testing readers on their ability to evaluate websites. These hoax sites are a great way to bring humor and hands-on evaluation into your classroom, and test your students’ web resource evaluation IQ! Check out these 11 example hoax sites for use in your own classrooms: