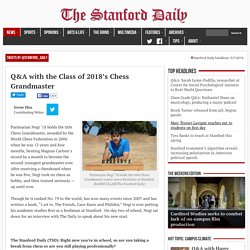 (RAHIM ULLAH/The Stanford Daily) Parimarjan Negi ‘18 holds the title Chess Grandmaster, awarded by the World Chess Federation in 2006 when he was 13 years and four months, beating Magnus Carlsen’s record by a month to become the second-youngest grandmaster ever. After receiving a chessboard when he was five, Negi took on chess as hobby, and then trained seriously — up until now. Though he is ranked No. 79 in the world, has won many events since 2007 and has written a book, “1.e4 vs. 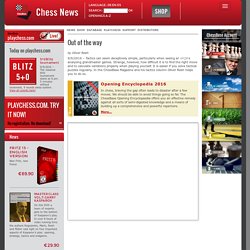 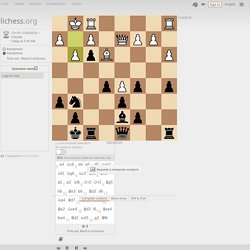 Anon. vs Anon. in S9Ykq4jy : B00 Nimzowitsch Defense: Scandinavian Variation, Bogoljubov Variation, Vehre Variation. The Chess Mind - The Chess Mind Blog - Baku Olympiad, USA Wins; China Wins Women's Section. Our neighbors to the north weren't as friendly as they could have been, to put it mildly, but it was a happy ending for the U.S.A. all the same. 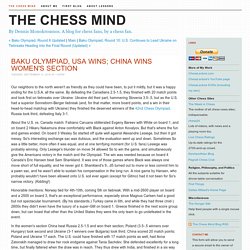 Anon. vs Anon. in 40u8nlhH : B00 Nimzowitsch Defense: Kennedy Variation, Linksspringer Variation. March Master's Bulletin: Watson on the Candidates’, the 'New Veresov' and more. The March edition of Chess.com's PDF & PGN magazine The Master's Bulletin is out, and yet again its content is rich and no doubt interesting for a wide range of chess fans. 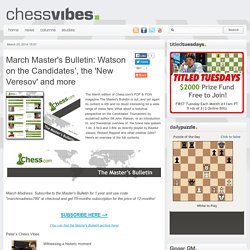 What about a historical perspective on the Candidates’ Tournament by acclaimed author IM John Watson, or an introduction to, and theoretical overview of, the brand new system 1.d4, 2.Nc3 and 3.Bf4 as recently played by Baadur Jobava, Richard Rapport and other creative GMs? Here's an overview of the full contents: March Madness: Subscribe to the Master's Bulletin for 1 year and use code "marchmadness789" at checkout and get 15-months subscription for the price of 12-months! The Streatham & Brixton Chess Blog: Give me another word for it. In the third round of the Wijk Aan Zee B group, on 13 January, Jobava-Zhao opened 1.d4 Nf6 2.Nc3 Nf6 3.Bf4. 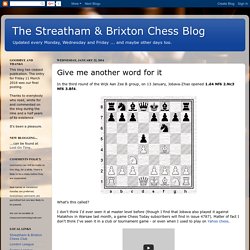 What's this called? I don't think I'd ever seen it at master level before (though I find that Jobava also played it against Malakhov in Warsaw last month, a game Chess Today subscribers will find in issue 4787). Matter of fact I don't think I've seen it in a club or tournament game - or even when I used to play on Yahoo chess. I'm sure I saw it played when I was a junior, but only when we found out you could actually start a game 1.d4 d5 instead of 1.e4 e5 so we played, in the mirror, the kingside sequence with which we were most familiar, but on the queenside instead.

I did promise fewer Trompowskys and Londons this month, but I hope you'll forgive me when you've seen the entertaining fare on offer. 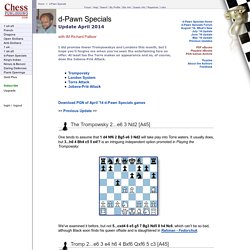 Anton Kovalyov (2617) vs Igor Kovalenko (2651) in 0lRG7u2F : A20 English Opening: King's English Variation. CB News - Living life the Jobi way (1/2) Interview with Baadur Jobava by Sagar Shah I waited in anticipation outside the ballroom of Sofitel Hotel, where the closing ceremony of the Abu Dhabi Open was about to begin. 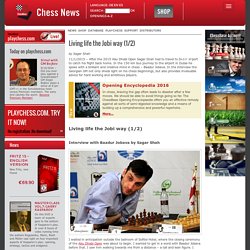 I wanted to get in a word with Baadur Jobava before that. I saw him walking towards me from a distance – a tall and lean figure. I went up to him and said, “Hi Baadur, I am Sagar Shah and I would like to interview you for the ChessBase news page.” “Why not!” That bus turned out to be a mini-van that could accommodate just 20 people. Lively and enthusiastic, on and off the board – that’s Baadur for you Sagar Shah: Ok Baadur, before we go into history mode, how was your experience at the Abu Dhabi Masters 2015? The Bubble Course - Create Complete Web Apps without Coding. Baadur Jobava playing the Queen's Pawn Game as White. 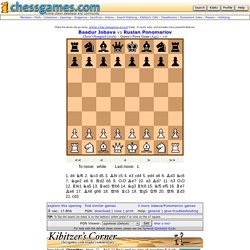 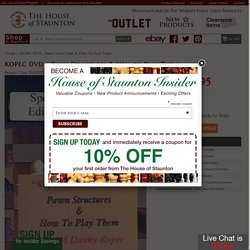 Danny Kopec, a highly regarded author and player provides you with tangible techniques and tools which will ensure your success as a player and analyst on this DVD. You will gain an understanding on the importance of Pawn Structures and how to play them. Item Returns - Computer Software and DVDsComputer Software and DVDs can only be returned or exchanged if the product is in its original, shrinkwrapped packaging and has not been installed or used in any way. Once you open the packaging of a Computer Software or DVD title, it can only be exchanged for the same title if the original media is defective. If you wish to return a Computer Software or DVD title that is eligible for return (as defined above), please refer to the Item Returns - All Other Items on our Return Policy page.