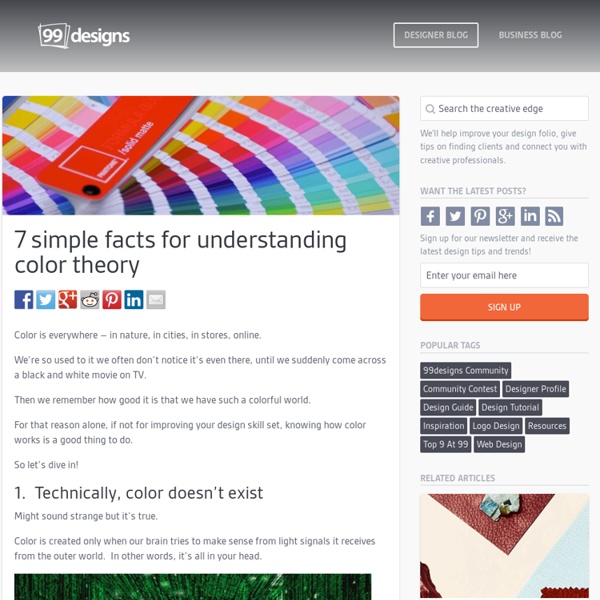 Color is everywhere – in nature, in cities, in stores, online. We’re so used to it we often don’t notice it’s even there, until we suddenly come across a black and white movie on TV. Then we remember how good it is that we have such a colorful world. For that reason alone, if not for improving your design skill set, knowing how color works is a good thing to do. So let’s dive in! 1. Might sound strange but it’s true. Color is created only when our brain tries to make sense from light signals it receives from the outer world. Deprived of color, our world would probably look like a scene from Matrix. Without that, our world is a monochromatic place bathing in electromagnetic radiation of varied intensity and wavelengths. The key takeout? 2. If you ever thought RGB color model is a recent discovery from Silicon Valley, you’d be three centuries off target. We are able to see colors because of red, green and blue receptor cells in our retina. 3. 4. 5. The RGB model The HSB model (or HSL / HSV) 6. 7. Related:  user experience • staging

Octalysis: Complete Gamification Framework - Yu-kai Chou (This is the Gamification Framework that I am most known for. Within a year, it was translated into 9 different languages and became classic teaching literature in the gamification space in the US, Europe, Australia and South America.) Octalysis: Complete Gamification Framework Gamification is design that places the most emphasis on human motivation in the process. In essence, it is Human-Focused Design (as opposed to “function-focused design”). Gamification is the craft of deriving all the fun and engaging elements found in games and applying them to real-world or productive activities. Most systems are “function-focused,” designed to get the job done quickly. The reason we call it gamification is because the gaming industry was the first to master Human-Focused Design. Games have no other purpose than to please the individual playing them. I saw that almost every game is fun because it appeals to certain Core Drives within us that motivate us towards certain activities. Octalysis Score

Goethe on the Psychology of Color and Emotion Color is an essential part of how we experience the world, both biologically and culturally. One of the earliest formal explorations of color theory came from an unlikely source — the German poet, artist, and politician Johann Wolfgang von Goethe, who in 1810 published Theory of Colors (public library; public domain), his treatise on the nature, function, and psychology of colors. Though the work was dismissed by a large portion of the scientific community, it remained of intense interest to a cohort of prominent philosophers and physicists, including Arthur Schopenhauer, Kurt Gödel, and Ludwig Wittgenstein. One of Goethe’s most radical points was a refutation of Newton’s ideas about the color spectrum, suggesting instead that darkness is an active ingredient rather than the mere passive absence of light. YELLOWThis is the color nearest the light. It appears on the slightest mitigation of light, whether by semi-transparent mediums or faint reflection from white surfaces.

modern color theory (concepts) A Scientific Theory of Color Vision. For many centuries, the behavior of color mixtures was difficult to explain because material color, which seemed to be anchored in "real" objects of the external world, was conceptually distinguished from the "illusory" colors in rainbows or prisms. The two types of mixtures behaved differently, but the reason for the difference was unknown. The trichromatic theory provided the clarifying explanation and prediction of all color sensations as arising in the behavior of the eye. Subtractive Color Mixture. The principles of subtractive color mixture are not a rigorous theory at all. Subtractive mixing theory imitates the main features of additive color theory, and to understand the problems with subtractive color mixing, we need to unmask these points of imitation one by one. Subtractive Mixtures Occur in Substances. In principle, subtractive color theory ought to be able to explain the color changes that occur in any kind of material mixture. 36. 37.

The End Of Apps As We Know Them The experience of our primary mobile screen being a bank of app icons that lead to independent destinations is dying. And that changes what we need to design and build. How we experience content via connected devices – laptops, phones, tablets, wearables – is undergoing a dramatic change. No more screens full of app icons This is such a paradigm shift it requires plenty of explaining. The idea of having a screen full of icons, representing independent apps, that need to be opened to experience them, is making less and less sense. The primary design pattern here is cards. Designing systems not destinations I covered this topic in detail in a previous post, so I’ll quickly summarise here. Recent changes to iOS and Android notifications Things changed with iOS 8 and Android KitKat. But that is changing fast. iOS is following suit here and raising the bar. The next version of Android takes this even further, breaking notifications into independent cards. The next iteration is obvious.

GSM - Addresses and Identifiers GSM distinguishes explicitly between user and equipment and deals with them separately. Besides phone numbers and subscriber and equipment identifiers, several other identifiers have been defined; they are needed for the management of subscriber mobility and for addressing of all the remaining network elements. The most important addresses and identifiers are presented in the following: International Mobile Station Equipment Identity (IMEI): The international mobile station equipment identity (IMEI) uniquely identifies a mobile station internationally. It is a kind of serial number. There are following parts of an IMEI: Type Approval Code (TAC): 6 decimal places, centrally assigned.Final Assembly Code (FAC): 6 decimal places, assigned by the manufacturer.Serial Number (SNR): 6 decimal places, assigned by the manufacturer.Spare (SP): 1 decimal place. Thus, IMEI = TAC + FAC + SNR + SP. International Mobile Subscriber Identity ( IMSI): There are following parts of an IMSI: Cell Identifier (CI):

Top 75 Network Security Tools Why cards are the future of the web Cards are fast becoming the best design pattern for mobile devices. We are currently witnessing a re-architecture of the web, away from pages and destinations, towards completely personalised experiences built on an aggregation of many individual pieces of content. Content being broken down into individual components and re-aggregated is the result of the rise of mobile technologies, billions of screens of all shapes and sizes, and unprecedented access to data from all kinds of sources through APIs and SDKs. The aggregation depends on: The person consuming the content and their interests, preferences, behaviour.Their location and environmental context.Their friends’ interests, preferences and behaviour.The targeting advertising eco-system. If the predominant medium of our time is set to be the portable screen (think phones and tablets), then the predominant design pattern is set to be cards. Twitter is moving to cards Google is moving to cards Everyone is moving to cards The list goes on.

Mind Mapping Software - Create Mind Maps online Make a DIY Pallet Coffee Table | Pallet Furniture Plans This easy to make rustic indoor coffee table is made from pallet wood. The pallet was dismantled and the thicker rails were used as the frame but they were slightly twisted. To straighten it was soaked with water and weighed down on a flat surface to dry. The slats were screwed across the top of the frame then cut straight. Submitted by Michael Tapscott! Fonts have feelings too — ooomf labs I’ve noticed how seemingly small things like font and the spacing between letters can impact how I feel when reading online. The right font choice along with the absence of sidebars and popups makes everything feel easier and better to read. Websites like Medium, Signal vs. Noise, and Zen Habits are like yoga studios for content. Their presentation of content puts me at peace while reading, allowing me to fully focus on the stories without distraction. Just look at the difference between Medium and Cracked: Exhibit A) Medium Exhibit B) Cracked When you compare the two, it’s obvious which one makes you feel like crud. The Cracked layout is painful to look at. After experimenting with how we display our writing on the Crew blog, I discovered there’s an element of science behind why we feel this way toward certain typefaces and layouts. How we read When we read, our eyes follow a natural pattern called a Scan Path. We break sentences up into scans (saccades) and pauses (fixations). 1. 2. 3. 4.

Tangeez - Tangible Lights by Emily Webster & Mustafa Bagdatli "Tangeez are wonderful building blocks of light. The magnetic click and the translucent colors are incredibly satisfying. They're continually offering new combinations, and they're impossible to put down. I want a whole wall of them." These “physical pixels” create a tactile, interactive and social experience that allows you to hold and control light. Tangeez combine red, green and blue light to create a spectrum of colors that change depending on how you stack them. The more you change and rearrange, the more colors you will see. "They've got the simple charm of a set of Dominoes and yet they're like an interactive set of Legos. -Donald Chestnut, Chief Experience Officer, SapientNitro From spaceships to skyscrapers, Christmas trees to robots, Tangeez can be combined and stacked infinitely to build glowing structures of any shape and size. Tangeez brighten up any space and are as portable and mobile as you are. "Who isn't fascinated with light? -Jim Campbell, Electronic Artist Emily Webster

Whatsapp lance son app web : Chrome only ! A Head-Up Display for Your Car That Lets You Race Yourself GhostDash creates a virtual car to follow for those who want to improve their racing skills. Justin Hayes Anyone who’s played racing videogames like Gran Turismo or even Mario Kart knows the ghost car—the hologram that rides the track with you, recreating exactly the fastest lap you’ve driven. Following that car through the apexes is the best way to learn to drive consistently fast and beat your competition come race day. Justin Hayes wanted to take that videogame feature and offer it to actual drivers. “Imagine you’re driving, and you do something different than normal—brake earlier, go smoother off the pedal,” says Hayes, who spends his working hours as a racing instructor. “I grew up on racing games, that’s what got me into cars,” Hayes says. The idea came from, naturally, a forum discussion among videogame racers on trackjunkies.org. If you don’t want to follow your ghost car, the device can also project your current speed and other info on the screen, right in your line of sight.