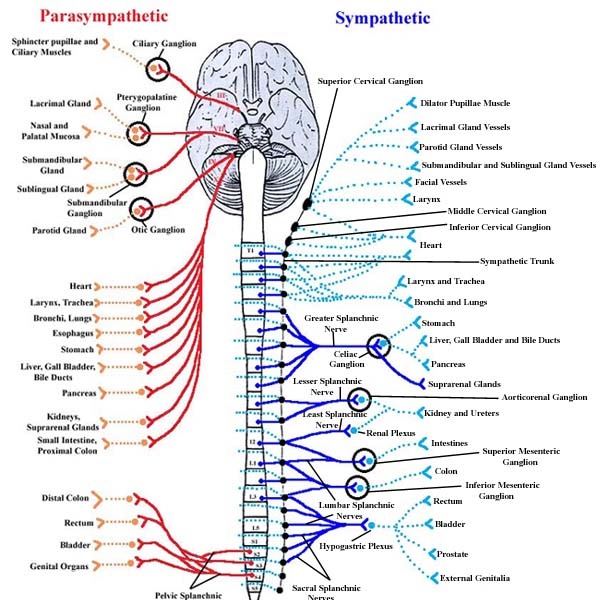 The Polyvagal Theory Psychophysiology, 32 (1995), 301-318. Cambridge University Press. Printed in the USA. Department of Human Development, University of Maryland, College Park, USA Copyright, 1995 Society for Psychophysiological Research Abstract The vagus, the 10th cranial nerve, contains pathways that contribute to the regulation of the internal viscera, including the heart. Descriptors: Vagus, Vagal tone, Nucleus ambiguus, Dorsal motor nucleus of the vagus, Respiratory sinus arrhythmia, Polyvagal Theory Contents: I. -- Introduction II. -- The Polyvagal Theory: Overview III. -- Summary and Conclusions IV. -- References, Author Notes, and Appendices Back to Home Page Sympathetic nervous system The sympathetic and the parasympathetic nervous system are parts of what is commonly called the autonomic nervous system. (Autonomic = can not be controlled by the mind). You can say that these systems work in balance with each other and directly or indirectly affect almost every structure in the body (e.g. heartfrequence, heartcapacity, lumbar function, kidneys, blood vessels, stomach and intestines) The sympathetic nervous system has an active "pushing" function, the parasympathetic has mainly a relaxing function. The sympathetic nervous system is located to the sympathetic chain, which connects to skin, blood vessels and organs in the body cavity. The sympathetic chain is located on both sides of the spine and consists of ganglias. The autonomic nervous system is most important in two situations: emergency situations that cause stress and require us to "fight" or take "flight", and nonemergency situations that allow us to "rest" and "digest".

Social Engagement System The ventral vagal system is involved with most aspects of social contact and pleasure. It guides eye contact, hearing, eating, speech, singing, nursing, kissing, smiling, and some would say, direct heart to heart contact. Because of its role in making contact between different people favorable, the ventral-vagal system is a way of achieving personal safety, but it requires a moderate amount of actual safety to develop or stay employed. That is why prolonged danger or stress, or stress or danger early in life, tends to atrophy or impair the development of, the ventral vagal system. The Social Engagement System The social engagement system is a two way interaction system (receptive and expressive) based mainly in the eyes, ears, larynx, and mouth, but incorporating the entire face and the torso above the diaphragm. The subtlety, interplay, and delicate overlap of the cranial nerve system not only is wondrous to contemplate, but also very little understood. Autonomic Flexibility Bedroom Eyes

Histology | Histology Atlas - Atlas of Microscopic Anatomy A Functional Approach - Anatomy Atlases PrefacePreface to the First EditionIntroduction Section 1. Cells (Plates 1.1 to 1.14) Section 2. Epithelial Tissue (Plates 2.15 to 2.26) Section 3. Connective Tissue (Plates 3.27 to 3.51) Section 4. Blood (Plates 4.57 to 4.62) Section 5. Appendices Appendix I: How to Study a Microscope Slide Appendix II: The Preparation of Cells and Tissue for Microscopic Study Appendix III: Methods of Fixation and Study Appendix IV: Comments on Color Groups, Stains, and the Staining Mechanism Appendix V: Nervous System Glossary of Terms References This Site's Awards, Reviews and Comments Home | About Us | FAQ | Reviews | Contact Us | Search Anatomy Atlases is curated by Michael P. Please send us comments by filling out our Comment Form. All contents copyright © 1995-2018 the Author(s) and Michael P. "Anatomy Atlases", the Anatomy Atlases logo, and "A digital library of anatomy information" are all Trademarks of Michael P. Anatomy Atlases is funded in whole by Michael P. URL:

Viva Las Vagus Nerve | Subtle Yoga A corny title – but a cool nerve. The 10th of the cranial nerves, it is often called the “Nerve of compassion” because when it’s active, it helps create the “warm-fuzzies” that we feel in our chest when we get a hug or are moved by a chick-flick. The vagus nerve is really a bundle of nerves that originates at the top of the spinal cord and enervates all sorts of organs. Here’s a picture: (Peter Jurek, www.peterjurek.com) That first little offshoot stimulates certain muscles in the vocal chamber, facilitating communication. You can see from this diagram that the vagus nerve branches off to everything from the neck down to the colon. Pretty easy to see how even the simplest yoga routine would stimulate lots of branches of this nerve. But here’s something even cooler – the research that Dacher Ketlner, director of the Social Interaction Laboratory at the University of California, Berkeley is doing shows that stimulating that vagus nerve is not only good for you – it’s good for the planet!

Breakthrough "Neuro Nutrition" Targets the Brain and Vagus Nerve To Boost the Body's Immune, Hormone and Neurological Systems Los Angeles, CA (PRWEB) July 2, 2008 It's becoming increasingly difficult to ignore: something seems to be going seriously wrong with our health these days. Skyrocketing rates of heart disease, cancer, digestive and anxiety disorders, autoimmune-based illnesses, and record levels of childhood asthma, autism, diabetes, ADD and obesity are causing many doctors to worry that human health appears to be literally under siege. With so many complex nutritional and ecological factors at work, could it be possible to develop a simple, yet effective treatment that addresses many of today's most prevalent health challenges? "The reason this approach is revolutionary and so effective is because these nutrient-rich whole food concentrates are created through a proprietary four-stage fermentation process that mimics human digestion. Many in the alternative medicine community believe that the important role the Vagus Nerve plays in human physiology has been ignored for far too long. Dr. About Dr.

Polyvagal Theory Phylogenetic Subsystems/Stages[edit] The vagus nerve is a primary component of the autonomic nervous system. Polyvagal theory outlines the structure and function of the two distinct branches of the vagus, both of which originate in the medulla.[1] More specifically, each branch is associated with a different adaptive behavioral strategy, both of which are inhibitory in nature via the parasympathetic nervous system (PNS). The vagal system is in opposition to the sympathetic-adrenal system, which is involved in mobilization behaviors. According to polyvagal theory, these opposing systems are phylogenetically arranged.[1] The Dorsal Vagal Complex[edit] The dorsal branch of the vagus originates in the dorsal motor nucleus and is considered the phylogenetically older branch.[2] This branch is unmyelinated and exists in most vertebrates. The DVC provides primary control of subdiaphragmatic visceral organs, such as the digestive tract. The Ventral Vagal Complex[edit] See also[edit]