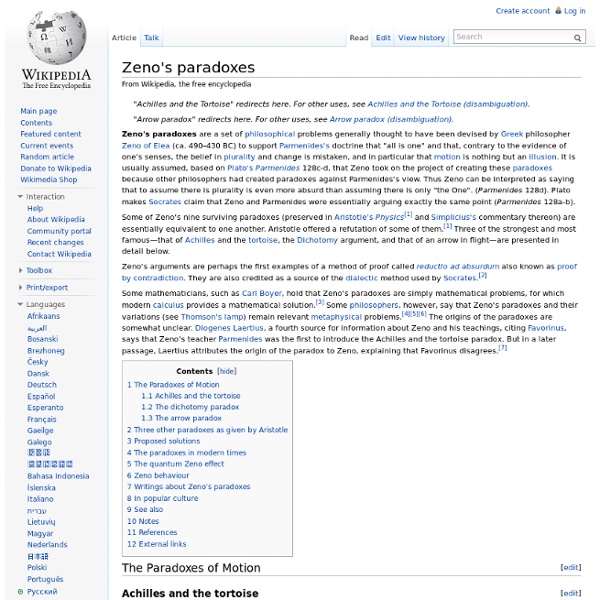 Zeno's arguments are perhaps the first examples of a method of proof called reductio ad absurdum also known as proof by contradiction. They are also credited as a source of the dialectic method used by Socrates.[3] Some mathematicians and historians, such as Carl Boyer, hold that Zeno's paradoxes are simply mathematical problems, for which modern calculus provides a mathematical solution.[4] Some philosophers, however, say that Zeno's paradoxes and their variations (see Thomson's lamp) remain relevant metaphysical problems.[5][6][7] The origins of the paradoxes are somewhat unclear. Diogenes Laertius, a fourth source for information about Zeno and his teachings, citing Favorinus, says that Zeno's teacher Parmenides was the first to introduce the Achilles and the tortoise paradox. But in a later passage, Laertius attributes the origin of the paradox to Zeno, explaining that Favorinus disagrees.[8] Paradoxes of motion[edit] Achilles and the tortoise[edit] Dichotomy paradox[edit]

Searching for the World's First Zero  Mathematicians consider the invention (or discovery, depending on your point of view) of zero as one of the most important intellectual advances humans have ever made. Why? Isn't zero just sheer nothingness? Nothing could be further from the truth. Zero is not only a concept of nothingness, which allows us to do arithmetic well and to algebraically define negative numbers, but it is also an important place-holding device. In that role, zero enables our base-10 number system to work, so that the same 10 numerals can be used over and over again, at different positions in a number. Fermi paradox A graphical representation of the Arecibo message – Humanity's first attempt to use radio waves to actively communicate its existence to alien civilizations The Fermi paradox (or Fermi's paradox) is the apparent contradiction between high estimates of the probability of the existence of extraterrestrial civilization and humanity's lack of contact with, or evidence for, such civilizations.[1] The basic points of the argument, made by physicists Enrico Fermi and Michael H. Hart, are: The Sun is a young star. There are billions of stars in the galaxy that are billions of years older;some of these stars probably have Earth-like planets[2] which, if the Earth is typical, may develop intelligent life;presumably, some of these civilizations will develop interstellar travel, a technology Earth is investigating even now, such as that used in the proposed 100 Year Starship;at any practical pace of interstellar travel, the galaxy can be completely colonized in a few tens of millions of years.

Teachers - Math Data Analysis/Probability Source: NewsHour Extra Analyze the effects of unemployment nationwide and locally, and understand what it means to be unemployed and who makes up this population. Use current data and local unemployment rates to create graphs, publications and presentations. Grade Level: 6-8, 9-12 Subjects: Math, Social Studies A Head-Up Display for Your Car That Lets You Race Yourself GhostDash creates a virtual car to follow for those who want to improve their racing skills. Justin Hayes Anyone who’s played racing videogames like Gran Turismo or even Mario Kart knows the ghost car—the hologram that rides the track with you, recreating exactly the fastest lap you’ve driven.

Teachers . Recommended Links . Math . Archive "A member of Ryerson Polytechnic Institute's Department of Engineering and Computing brings you this award-winning site about the history and operations of the abacus. The site compares devices from different countries, gives an overview of the abacus's history, teaches how to use an abacus, offers instructions on making an abacus out of Legos, and offers recommended reading and links.

Chicken or the egg Cultural references to the Chicken and Egg intend to point out the futility of identifying the first case of a circular cause and consequence. It could be considered that in this approach lies the most fundamental nature of the question. A literal answer is an egg according to some people, as egg-laying species pre-date the existence of chickens. To others, the chicken came first, seeing as chickens are merely domesticated Red Junglefowls. However, the metaphorical view sets a metaphysical ground to the dilemma. To better understand its metaphorical meaning, the question could be reformulated as: "Which came first, X that can't come without Y, or Y that can't come without X?" Fitbit Announces Three New Wearables, Including a Fancy 'Super Watch' Fitbit Fitbit, one of the dominant players in today’s increasingly saturated fitness tracking space, today announced a trio of wearables of the wrist-worn variety. While the wearable space already has an overwhelming number of offerings, like the Garmin Vivosmart, the Misfit Flash, and Polar’s smart fitness watches, wearing something on your wrist is, as Apple emphasized in its Apple Watch hype, very personal. What works for one individual will not necessarily work for another.