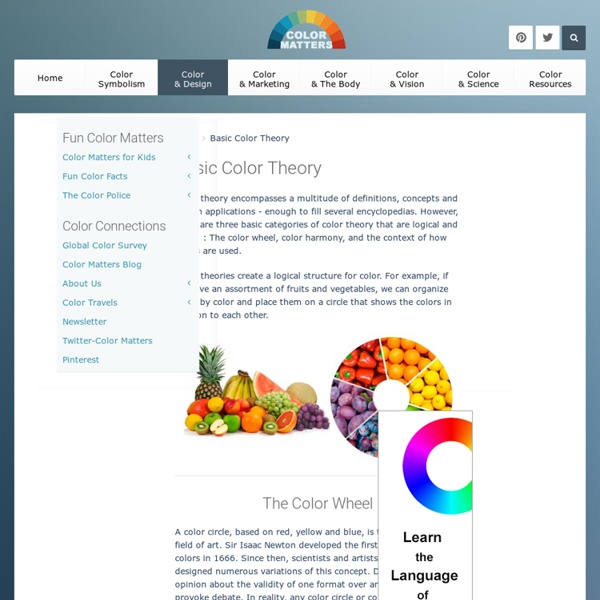 Color theory encompasses a multitude of definitions, concepts and design applications - enough to fill several encyclopedias. However, there are three basic categories of color theory that are logical and useful : The color wheel, color harmony, and the context of how colors are used. Color theories create a logical structure for color. For example, if we have an assortment of fruits and vegetables, we can organize them by color and place them on a circle that shows the colors in relation to each other. The Color Wheel A color circle, based on red, yellow and blue, is traditional in the field of art. There are also definitions (or categories) of colors based on the color wheel. Primary Colors: Red, yellow and blueIn traditional color theory (used in paint and pigments), primary colors are the 3 pigment colors that cannot be mixed or formed by any combination of other colors. Secondary Colors: Green, orange and purpleThese are the colors formed by mixing the primary colors. Color Harmony 1.

Color Rush: American Color Photography from Stieglitz to Sherman looks at the history of color photography (PHOTOS). Left: William Eggleston © Eggleston Artistic Trust. On view at the Metropolitan Museum of Art in "At War With the Obvious: Photographs by William Eggleston," through July 28. Right: © Nan Goldin. A Work In Progress » Analogous Color in Art History There are about 10 common color harmonies that show up in art history over and over again. (There are other ways to combine color, but these ten show up a lot.) Two previous posts covered the Primary Triad Harmony. Today we’ll look at Analogous Color. An analagous color harmony uses colors which are side-by-side on the color wheel.

Mama Jenn: Color Wheel Want a fun way to show the magic of color mixing? Check out the Color Wheel activities! There are a few things that you will need for this activity: - food coloring (red, yellow, and blue)- paper towels- a dropper (we used an old medicine dropper)- a cup for water- 3 containers/cups for food coloring- toothpicks- Color Wheel printables How Diagonal Lines add Direction and Dynamics to your Photos Introduction This is now my 3rd post on using lines as a composition technique, and in this post we’re going to be looking at the effect that adding diagonal lines does to a photo. Diagonal lines are important factors to try add to your photos now and then, as they create tension and dynamics in a photo and lead the eyes in a particular direction.

The Most Important Painting Skill You Didn’t Know You Needed This little painting of a freesia is my first attempt with oil paints for quite some time. I was so energised starting this painting. As soon as I got out the easel and set it up, as soon as the paints came out, as soon as I opened the tub of turps and the smell of pine trees filled the room it all came flooding back to me. This is where I’m meant to be, among these smells, in the depth of this charged silence, infused with the calm tension that precedes a painting session. Racism shock therapy in diversity education: American Pictures! "American Pictures" - a tool against racism Racism in America, in Europe or universally: American Pictures is an audio-visual anti-racism program which in an effective, entertaining and moving way shows the ultimate cost of racial discrimination, segregation and ghettoization of ethnic minorities. Jacob Holdt's pictures of poverty, oppression, slavery and injustice in the black underclass are used widely for racial prejudice reduction and multicultural diversity training in universities, colleges and high schools, but are also excellent for sociology conventions and human rights seminars. Jacob Holdt's photography of despairing poor black ghettos and mind crippling child poverty as the end result of white supremacy and institutionalized inequality and injustice - not to speak of his shocking portrayal of extremist white hate groups, Ku Klux Klan and neo Nazis and even mass murderers - seems to belong in a distant history, but is made long after the civil rights struggle.

Basic color schemes: Color Theory Introduction With colors you can set a mood, attract attention, or make a statement. You can use color to energize, or to cool down. By selecting the right color scheme, you can create an ambiance of elegance, warmth or tranquility, or you can convey an image of playful youthfulness. Color can be your most powerful design element if you learn to use it effectively. Chart: Every possible emotional overlap in Inside Out (Spoilers? Link in comm... If disgust is avoidance of contamination and fear is avoidance of danger, seems like Disgust2 would be revulsion and Disgust x Fear would be Prejudice. Just a thought. Don't be stupid, emotions don't get that complex.

Developing An Eye For Color : The Maine text by Jessica Stammen transparency studies by Jackson Day, Lizzie Ogle, Harper Gordon and Brynn Kooyenga For the past few winters, during the weeks that are made of the dark cold days between holiday festivities and mud, I have been lucky enough to join a dozen or so eighth graders at the local middle school for a special class exploring color. “It is obvious that in working with color paper there is no way of mixing the colors mechanically, as paint and pigment permit, and as they invite one to do on a palette or in a container. Though this may first appear as a handicap, it is actually a challenge to study color mixture in our imagination, that is, so to say, with closed eyes. Starting with the simple and well-known fact that blue and red when mixed produce purple, a blue and a red are selected and held next to each other.

An understanding of color theory can help send your project from decent to outstanding. Learn the story behind color theory and discover which colors work best together. by baileykretz Oct 1