THE INFOJUSTICE JOURNAL: Sample 39 THE SIGNS AND INDICATIONS FOR MANUAL MEDICINE by Dr.Scott David Neff CFE. This editor would like to thank my associates for the photos. 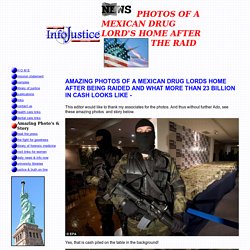 And thus without further Ado, see these amazing photos and story below. Yes, that is cash piled on the table in the background! Just a small collection of guns - these people are not really dangerous at all; not. Yes, that is real gold on these guns! Gold and Titanium 45 Caliber semi automatic pistols - they found 16 of these! Drug cartel. Mexican Drug War.

Although Mexican drug cartels, or drug trafficking organizations, have existed for several decades, their influence has increased[91][92] since the demise of the Colombian Cali and Medellín cartels in the 1990s. 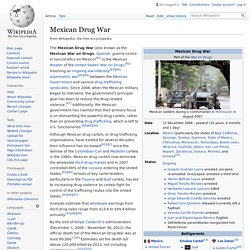 Mexican drug cartels now dominate the wholesale illicit drug market and in 2007 controlled 90% of the cocaine entering the United States.[93][94] Arrests of key cartel leaders, particularly in the Tijuana and Gulf cartels, has led to increasing drug violence as cartels fight for control of the trafficking routes into the United States.[95][96][97] Analysts estimate that wholesale earnings from illicit drug sales range from $13.6 to $49.4 billion annually.[93][98][99] By the end of Felipe Calderón's administration (December 1, 2006 – November 30, 2012), the official death toll of the Mexican Drug War was at least 60,000.[100] Estimates set the death toll above 120,000 killed by 2013, not including 27,000 missing.[101][102] Background[edit] PAN party Presidents[edit] Sources[edit] 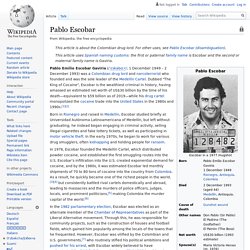 Dubbed "The King of Cocaine", Escobar is the wealthiest criminal in history, having amassed an estimated net worth of US$30 billion by the time of his death—equivalent to $59 billion as of 2019—while his drug cartel monopolized the cocaine trade into the United States in the 1980s and 1990s.[1][2] Born in Rionegro and raised in Medellín, Escobar studied briefly at Universidad Autónoma Latinoamericana of Medellín, but left without graduating; he instead began engaging in criminal activity, selling illegal cigarettes and fake lottery tickets, as well as participating in motor vehicle theft.

In the early 1970s, he began to work for various drug smugglers, often kidnapping and holding people for ransom. Early life The city of Medellín, where Escobar grew up and began his criminal career. Criminal career. El Magico Monologue.

Why Do People Use Drugs? How Do Drugs Work? People take drugs because they want to change something about their lives. 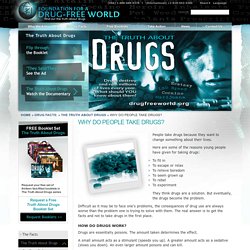 Here are some of the reasons young people have given for taking drugs: To fit in To escape or relax To relieve boredom To seem grown up To rebel To experiment They think drugs are a solution. Make Interesting Characters / So You Want To. Two dystopian TV shows to die for - Your Tech Weblog. . 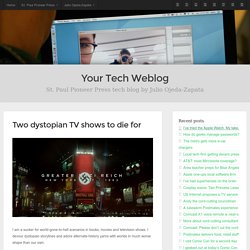 I am a sucker for world-gone-to-hell scenarios in books, movies and television shows. I devour dystopian storylines and adore alternate-history yarns with worlds in much worse shape than our own. So two new TV shows have my full attention. One of these, “12 Monkeys,” is based on the Bruce Willis movie of the same name. Both are set in a near-future Earth with most of mankind wiped out by a plague, and focused on a man sent back in time to set things right. 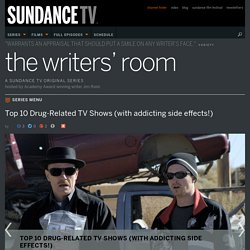 The Wire "Don't matter who did what to who at this point. Fact is, we went to war, and now there ain't no going back. " Arguably the greatest television show in the history of... ever, The Wire takes the cops n' criminals genre and turns it on its head. Creator David Simon is a former police reporter, and his adherence to realism pays off. Craving a new TV fix? Photo Credit: HBO. Achromatopsia. Achromatopsia (ACHM) is a medical syndrome that exhibits symptoms relating to at least five conditions. 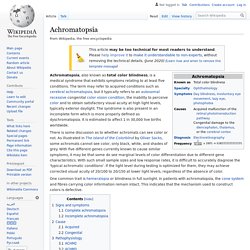 The term may refer to acquired conditions such as cerebral achromatopsia, also known as color agnosia, but it typically refers to an autosomal recessive congenital color vision condition, the inability to perceive color and to achieve satisfactory visual acuity at high light levels (typically exterior daylight). The syndrome is also present in an incomplete form which is more properly defined as dyschromatopsia. ColorVisionTesting. The human eye sees by light stimulating the retina (a neuro-membrane lining the inside back of the eye). 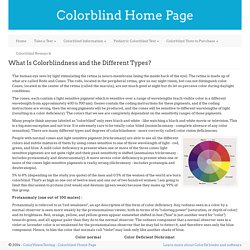 The retina is made up of what are called Rods and Cones. The rods, located in the peripheral retina, give us our night vision, but can not distinguish color. Cones, located in the center of the retina (called the macula), are not much good at night but do let us perceive color during daylight conditions. The cones, each contain a light sensitive pigment which is sensitive over a range of wavelengths (each visible color is a different wavelength from approximately 400 to 700 nm). Genes contain the coding instructions for these pigments, and if the coding instructions are wrong, then the wrong pigments will be produced, and the cones will be sensitive to different wavelengths of light (resulting in a color deficiency).