History of the colour wheel. The first colour wheel was created in 1706 by Sir Isaac Newton, who arranged red, orange, yellow, green, blue, indigo and violet into a natural arrangement on a rotating disk. 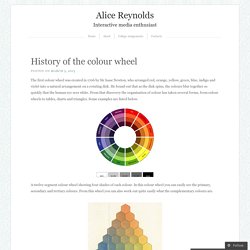 He found out that as the disk spins, the colours blur together so quickly that the human eye sees white. From that discovery the organisation of colour has taken several forms, from colour wheels to tables, charts and triangles. Some examples are listed below. A twelve segment colour wheel showing four shades of each colour. In this colour wheel you can easily see the primary, secondary and tertiary colours. 10 Troublesome Colors to Avoid In Your Advertising. Most of the readers on DesignFestival probably already know which colors to avoid in advertising, so for those of you who fall into this category, this article is simply to give you a bit of humor to brighten your day. 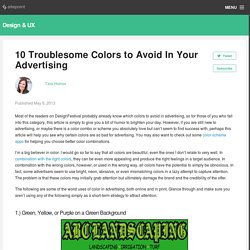 However, if you are still new to advertising, or maybe there is a color combo or scheme you absolutely love but can’t seem to find success with, perhaps this article will help you see why certain colors are so bad for advertising. You may also want to check out some color scheme apps for helping you choose better color combinations. I’m a big believer in color. I would go so far to say that all colors are beautiful, even the ones I don’t relate to very well. In combination with the right colors, they can be even more appealing and produce the right feelings in a target audience. A "Condensed" History Of The Campbell's Tomato Soup Can. While Andy Warhol can be credited for establishing the classic Campbell's soup can as an iconographic pop art emblem, he never would would have appropriated its imagery had it not already been iconic in its own right. 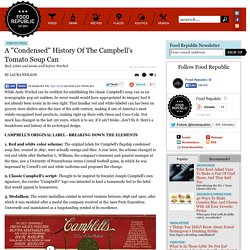 That familiar red and white-labeled can has been on grocery store shelves since the turn of the 20th century, making it one of America's most widely-recognized food products, ranking right up there with Oreos and Coca-Cola. Not much has changed in the last 120 years, which is to say, if it ain't broke...don't fix it. A study of colour emotion and colour preference. Part I: Colour emotions for single colours. Milton Glaser: his heart was in the right place. Color psychology. The "rose of temperaments" (Temperamenten-Rose) compiled by Goethe and Schiller in 1798/9. 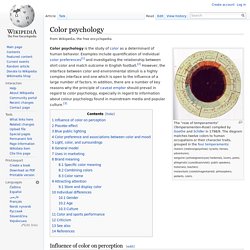 The diagram matches twelve colors to human occupations or their character traits, grouped in the four temperaments:choleric (red/orange/yellow): tyrants, heroes, adventurers; sanguine (yellow/green/cyan) hedonists, lovers, poets; phlegmatic (cyan/blue/violet): public speakers, historians, teachers; melancholic (violet/magenta/red): philosophers, pedants, rulers. Color psychology is the study of color as a determinant of human behavior. Examples include quantification of individual color preferences[1] and investigating the relationship between shirt color and match outcome in English football.[2] However, the interface between color and environmental stimuli is a highly complex interface and one which is open to the influence of a large number of factors. 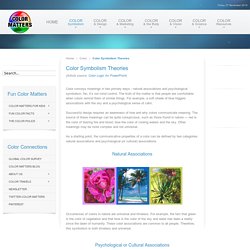 No, it’s not mind control. The truth of the matter is that people are comfortable when colors remind them of similar things. For example, a soft shade of blue triggers associations with the sky and a psychological sense of calm. Color Matters welcomes you to the world of color: Symbolism, design, vision, science, marketing and more! The Meaning of Colors. Disciplines > Communication > The Meaning of Colors Meanings of color | Use in retail and business | Gender effects | Cultural effects | So what? 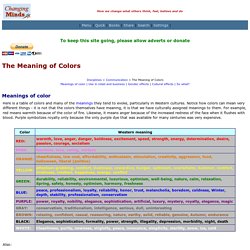 Meanings of color Here is a table of colors and many of the meanings they tend to evoke, particularly in Western cultures. Notice how colors can mean very different things - it is not that the colors themselves have meaning, it is that we have culturally assigned meanings to them. What is Color? We perceive color just as we perceive taste. 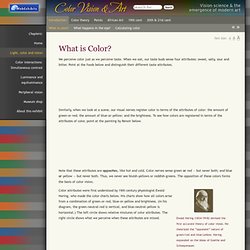 When we eat, our taste buds sense four attributes: sweet, salty, sour and bitter. Point at the foods below and distinguish their different taste attributes. Theory of Colours. Theory of Colours (original German title Zur Farbenlehre) is a book by Johann Wolfgang von Goethe about the poet's views on the nature of colours and how these are perceived by humans. Published in 1810, it contains detailed descriptions of phenomena such as coloured shadows, refraction, and chromatic aberration. The work originated in Goethe's occupation with painting and mainly exerted an influence onto the arts (Philipp Otto Runge, J. M. W. Johann Wolfgang von Goethe. Johann Wolfgang von Goethe (/ˈɡɜrtə/;[1] German: [ˈjoːhan ˈvɔlfɡaŋ fɔn ˈɡøːtə] ( 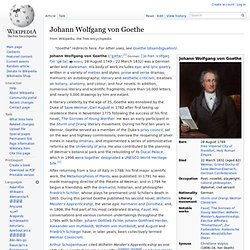 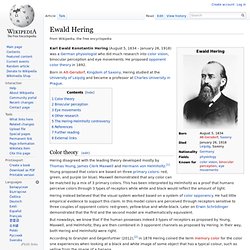 He proposed opponent color theory in 1892. Born in Alt-Gersdorf, Kingdom of Saxony, Hering studied at the University of Leipzig and became a professor at Charles University in Prague. Color theory[edit] Hering instead believed that the visual system worked based on a system of color opponency. He had little empirical evidence to support this claim. Opponent process. The color opponent process is a color theory that states that the human visual system interprets information about color by processing signals from cones and rods in an antagonistic manner. 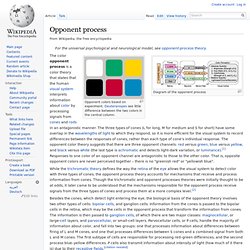 The three types of cones (L for long, M for medium and S for short) have some overlap in the wavelengths of light to which they respond, so it is more efficient for the visual system to record differences between the responses of cones, rather than each type of cone's individual response. The opponent color theory suggests that there are three opponent channels: red versus green, blue versus yellow, and black versus white (the last type is achromatic and detects light-dark variation, or luminance).[1] Responses to one color of an opponent channel are antagonistic to those to the other color.

Newton and the Color Spectrum. Piet Mondrian Biography, Art, and Analysis of Works. "I wish to approach truth as closely as is possible, and therefore I abstract everything until I arrive at the fundamental quality of objects. " Synopsis Piet Mondrian, one of the founders of the Dutch modern movement De Stijl, is recognized for the purity of his abstractions and methodical practice by which he arrived at them. He radically simplified the elements of his paintings to reflect what he saw as the spiritual order underlying the visible world, creating a clear, universal aesthetic language within his canvases.

In his best known paintings from the 1920s, Mondrian reduced his shapes to lines and rectangles and his palette to fundamental basics pushing past references to the outside world toward pure abstraction. Piet Mondrian. Pieter Cornelis "Piet" Mondriaan, after 1906 Mondrian (; Dutch: [ˈpit ˈmɔndrijaːn], later [ˈmɔndrijɑn]; 7 March 1872 – 1 February 1944), was a Dutch painter and theoretician who is regarded as one of the greatest artists of the 20th century. He is known for being one of the pioneers of 20th century abstract art, as he changed his artistic direction from figurative painting to an increasingly abstract style, until he reached a point where his artistic vocabulary was reduced to simple geometric elements.

Mondrian's art was highly utopian and was concerned with a search for universal values and aesthetics. He proclaimed in 1914: Art is higher than reality and has no direct relation to reality. To approach the spiritual in art, one will make as little use as possible of reality, because reality is opposed to the spiritual.

Each color has many aspects to it but you can easily learn the language of color by understanding a few simple concepts which I will teach you here. Non-verbal Communication. Theories. Goethe's Color Theory. Johann Wolfgang von Goethe (1749-1832) was the greatest poet, playwright, novelist and essayist in the German language – comparable to Shakespeare and Dante.