Beyond Pink and Blue: A Look at Gender Colors 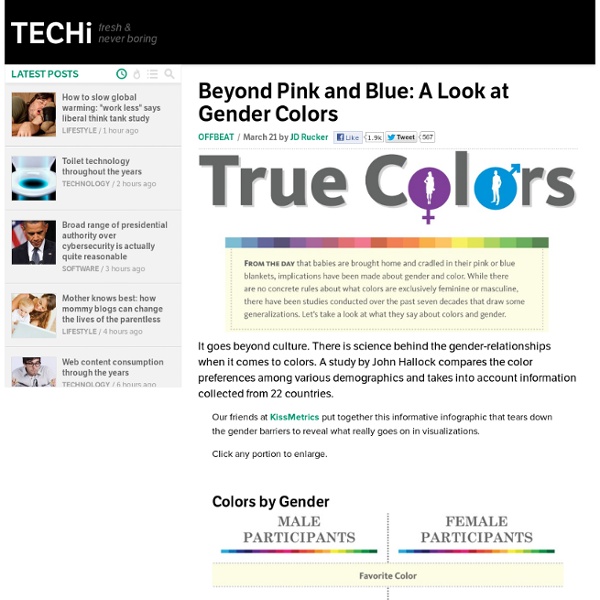 It goes beyond culture. There is science behind the gender-relationships when it comes to colors. A study by John Hallock compares the color preferences among various demographics and takes into account information collected from 22 countries. Our friends at KissMetrics put together this informative infographic that tears down the gender barriers to reveal what really goes on in visualizations. Click any portion to enlarge. Colors by Gender The Color Purple - The most notable gender difference can be seen in the color purple. Blue Reigns Supreme – Both males and females like the color blue, which receives favor with 35% of female respondents and more than half of the male respondents. A Closer Look In 2007, Doctor Anya Hurlbert and Yazhu Ling created an experiment to explore how men and women differ in their perceptions of color. Results of the Experiment The experiment showed that men and women both preferred blue out of the sets of colors. Color Naming: Men Keep It Simple

Emperor Norton Joshua Abraham Norton (c. 1817–1818[2] – January 8, 1880), known as Emperor Norton, was a citizen of San Francisco, California who in 1859 proclaimed himself "Norton I, Emperor of the United States"[3] and subsequently "Protector of Mexico".[4] Born in England, Norton spent most of his early life in South Africa. He immigrated to San Francisco in 1849 after receiving a bequest of $40,000 (inflation adjusted to $1.2 to $1.5 million in 2014 US Dollars) from his father's estate, arriving aboard the steam yacht Hurlothrumbo.[5] Norton initially made a living as a businessman, but he lost his fortune investing in Peruvian rice.[6] After losing a lawsuit in which he tried to void his rice contract, Norton left San Francisco. Early life[edit]

Guide to flirting Why do we flirt? Flirting is much more than just a bit of fun: it is a universal and essential aspect of human interaction. Anthropological research shows that flirting is to be found, in some form, in all cultures and societies around the world. Living Without Plastic « Pledge Off Plastic Plastic is everywhere; it wraps our food, it packages our products; it touches us every day. Lately, I’ve been wondering whether it’s enough to just recycle. No matter how much we recycle, plastic ends up in our streams, along our roads, and in our oceans.

Color Theory 101 First impressions are everything. How you look and how you present yourself can determine how you are perceived. The same goes for our design work. The impression that our work gives depends on a myriad of different factors. One of the most important factors of any design is color. Microwaved Ivory Soap When I came across the idea to microwave Ivory soap on The Cyber School Mom Diary’s fantastically comprehensive Supermegatotally Thrilladelic Not Bummer Summer list, I was instantly intrigued. “What happens when you microwave Ivory soap?” I asked. “Try it and see!”

Six Tips For Designing a Memorable Brand When clients call on Yang Kim and Kevin Budelmann, principals of branding firm People Design in Grand Rapids, Michigan, they usually ask for a new logo. "But the logo is just the tip of the iceberg," Budelmann says. Usually, what they really want is a redesigned brand. Out Of Body Experience Guaranteed – Alarm Clock Technique It is impossible not to be curious out having an out of body experience. Not just because it is something bound in mystery and excitement – the idea of being liberated from the limiting confines of our bodies is indeed very appealing – but because it is something which makes up a certain essence of our culture. Mankind has always dreamt about releasing himself, whether through controlled flight or artificial weightlessness, or through redemption and religious experiences. Having an out of body experience is something, which we cannot help but crave, and something that, in many ways, is very easy to imagine. We all encounter something not dissimilar to an out of body experience each night when we dream, and within our dreams, we are free from any of the limitations we face in waking life. Often, many of us encounter out of body experiences without understanding how or why it took place.

Chidori Furniture by Kengo Kuma and Associates Traditional Japanese toys inspired this modular furniture by architects Kengo Kuma and Associates for the East Japan Project. Twelve wooden sticks slot together without glue to form the units, which combine to make shelving or tables. The six-sided units can be connected to one another from any edge. The Chidori Furniture is named after Chidori toys, which are made from simple wooden components with unique joints - see another furniture design based on a Japanese puzzle here.

9 Most Devastating Insults From Around the World A responsible traveler won't set foot in another country without knowing how to viciously insult the people in their native language. Odds are, you won't even make it out of the airport before a situation arises that requires obscenities. But "obscenity" is an ever-moving target. It's an amalgamation of cultural taboos, the impact of current events and your mom. Web Design Tutorials for Developers - Web Design Blog – DesignM.ag Get the FlatPix UI Kit for only $7 - Learn More or Buy Now Modern development APIs work like agents for sharing information to other 3rd party websites. I’ve written many past tutorials about API development to help anyone new to this process. There are so many web-based services that it’s tough picking something to grab people’s attention. In this tutorial I want to demonstrate how we can access the Forrst API using jQuery. Some API wrappers actually require server-side code like PHP or Ruby.

Top 10 Strange Phenomena of the Mind Humans The mind is a wonderful thing – there is so much about it which remains a mystery to this day. Science is able to describe strange phenomena, but can not account for their origins. While most of us are familiar with one or two on this list, many others are mostly unknown outside of the psychological realm. This is a list of the top ten strange mental phenomena. We have all some experience of a feeling, that comes over us occasionally, of what we are saying and doing having been said and done before, in a remote time – of our having been surrounded, dim ages ago, by the same faces, objects, and circumstances – of our knowing perfectly what will be said next, as if we suddenly remember it! The 33 Most Beautiful Abandoned Places In The World Many people doesn’t know, and didn’t even heard about these famous abandoned places. Many of these places are really something amazing, but they are also really sad when you take a closer look at them. On the folowing list, you can see abandoned planes, abandoned ships, as well as the abandoned houses, and so many other things, that are really amazing and magnificent. So, check out these amazing abandoned places photos.

7 Innocent Gestures That Can Get You Killed Overseas If you've ever had your penis cut off and/or been executed while on holiday, you'll probably know that it's easy to offend people from other cultures. Unless you learn the ways of the place you're visiting, even the most well-meaning tourist can regularly find his oesophagus stuffed with burning goat. But surely just plain common sense and good manners will save you, right? Wrong. Extend Your Hand, Palm Outward in Greece